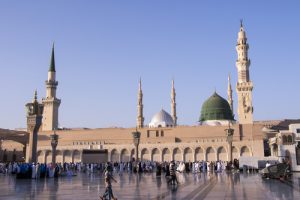 It was in the year 570, after Jesus, that Muhammad was born in Makkah, in what is now Saudi Arabia. Arabia, by all accounts, is the cradle of the human race. All the oldest human remains so far found come from the area of its location.

Hemmed in by red, black and brown volcanic hills about 80 kilometres to the east of the Red Sea, stands the city of Makkah. It was then a small merchant town on the ancient ‘incense’ route through which passed the great trade caravans between the south and north.

However, Makkah was, and remains, important for an altogether different reason. For here lies the Kabah, the ‘first House’ ever set up for mankind to worship their only God.

More than 1,000 years before the Prophet Solomon built the temple in Jerusalem, his ancestor, the Prophet Abraham, aided by his elder son the Prophet Ishmael, raised its walls on very ancient foundations.

Close by the Kabah lies the well called Zam Zam. Its origin, too, goes back to the Prophet Abraham’s time. It was this well which sprang up miraculously to save the life of the infant Ishmael.

In the words of the Bible:

And God heard the voice of the boy; and the angel of God called to Hagar out of heaven, and said to her: ‘What ails you, Hagar? Fear not, for God has heard the voice of the boy where he is. Arise, lift up the boy, and hold him in your hand; for I will make him a great nation. And God opened her eyes, and she saw a well of water; and she went, and filled the bottle with water, and gave the boy a drink. And God was with the boy; and he grew and dwelt in the wilderness, and became an archer. (Genesis 21:17–20 )

Or, as the Psalmist sings:

As they pass through the dry Valley of Baca, it becomes a place of springs; the early rain fills it with pools. (Psalms 84: 6)

Makkah never had, nor does it have now, any worldly inducement to offer for settlement. It is a barren, desolate place, where even grass does not grow! There were springs and wells of abundant water nearby in Taif, and a short distance away in Madinah. But it was the first House of God, architecturally an unremarkable cube, but spiritually and civilizationally the most remarkable fountain and spring of life – which made it supremely important, a place of attraction for people from all over the world. Forever, therefore, Makkah has been a great centre of pilgrimage.

By the time Muhammad was born, the Kabah’s latest guardians, the tribe of Quraish, had more than 300 idols installed in and around the Kabah to be worshipped as lords, gods and intercessors besides the One God.

Muhammad was a direct descendant of the Prophet Abraham through the Prophet Ishmael. He belonged to the financially poor but politically strong and noble clan of Banu Hashim from the tribe of Quraysh.

As guardians of the Kabah, the House of God and the centre of pilgrimage for all Arabia, the Quraysh ranked higher in dignity and power than any other tribe. Hashim held the high office of levying taxes and providing the pilgrims with food and water.

Muhammad was born an orphan. His father, Abdullah, died before he was born. His mother,

Aminah, too, passed away when he was only six years old. Doubly an orphan, his grandfather, Abd al-Muttalib, took him into his care. Only two years later, however, the orphaned boy was bereaved of his grandfather as well, leaving him in the care of his uncle, Abu Talib.

After his birth, the infant child was sent to the desert to be suckled and weaned and to spend part of his childhood among one of the Bedouin tribes, Bani Sad ibn Bakr, who live in the southeast of Makkah. This was the usual custom of all the great families in Makkah.

As Muhammad grew up, to earn his livelihood he pastured sheep and goats, as have done most prophets. His uncle and guardian, Abu Talib, also took him along with him on his travels with the trade caravans to greater Syria. He, thus, gained experience in trading.

Because of his great honesty and diligence and the business acumen he showed in trading, he was soon being sought after to take charge of other people’s merchandise, i.e. for those who could not travel themselves, and to trade on their behalf.

At the age of 25, Muhammad married a lady named Khadijah. A widow, Khadijah was 15 years older than Muhammad. She was a rich merchant of Makkah, and Muhammad had managed some of her trade affairs. It was she who proposed marriage.

her death 25 years later. She bore him six children, of whom four daughters survived.

Until he was 40, Muhammad led a very uneventful life, showing no signs of the Prophet in the making that he was suddenly to be. What set him apart from his compatriots was his absolute truthfulness, trustworthiness and integrity, his sense of justice and compassion for the poor, oppressed and downtrodden, as well as his total refusal to worship any idol or do anything immoral.

He was popularly acclaimed for these qualities. Al-Amin, the Trustworthy, the Honest, al-Sadiq, the Truthful, were the titles on everybody’s lips for Muhammad, which itself means the Praised One.

At a very young age, Muhammad enthusiastically joined a pact of chivalry for the establishment of justice and the protection of the weak and the oppressed made by certain chiefs of the Quraysh.

He took part in the Oath when they all vowed ‘that henceforth they would stand together as one man on the side of the oppressed against the oppressor until justice was done, whether the oppressed were a man of the Quraysh or one who had come from abroad.’

In later years, at Madinah, Muhammad used to say: ‘I was present in the house of Abd Allah ibn Judan at so excellent a pact that I would not exchange my part in it for a herd of red camels, and if now, in Islam, I were summoned to a similar pact, I would gladly respond.’

A testimony to Muhammad’s character was given by his wife Khadijah as she comforted him at the time when the first Revelation came to him. He said later: ‘I fear for my life.’ She replied: ‘By no means! I swear by God that God will never lose you. You join ties of relationship, you speak the truth, you bear people’s burdens, you earn for the poor, you entertain guests, and you help against the vicissitudes which affect people’s rights.’

Muhammad’s wisdom was also acknowledged by all. Once, while repairing the Kabah, various clans of the Quraysh disputed violently as to who should have the honour of placing the Black Stone in its place. As they were about to unsheathe their swords

Source: Taken from the author’s Who Is Muhammad? Published by Islamic Foundation, London, 1998.