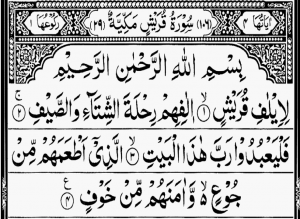 Surah Quraish was revealed in Makkah. For many scholars, this surah seems to be an extension of surah Al-Feel (The Elephant). Both are very similar in terms of tone as well as subject matter.

However, Surah Quraish is independent from surah Al-Feel; there were nine other surahs revealed between the two surahs.

The overall theme of the Surah

Though most of the Arabian Peninsula was witnessing poor security conditions, the blessedness of Makkah’s Sacred House guaranteed security, peace and flourishing businesses to the Quraishites who lived near it.

This was the result of the dua’a of Prophet Ibrahim (peace be upon him) when he had to leave his wife and son, Lady Hajar and Prophet Isma`il in that barren valley per Allah’s Command. He prayed,

{Lord, make this a land of security and make provisions of fruits for those of its people who believe in Allah and the Last Day} (Al-Baqarah 2:126)

Regarding the other Arabs who did not live near the Sacred House, the Qur’an says,

{Have they not seen that We have made it a secure sanctuary, while men are being snatched away from all around them} (Al-`Ankabut 29:67)

This shows to what extent the Quraishites enjoyed Allah’s blessings and favors unlike the other residents of the Arabian Peninsula.

Given this, the Quraishites established two great routes for their commercial caravans, to Yemen (in the south) in winter and to the Levant (in the north) in summer.

What do we get from this?

Some people may say, “This surah was for the Quraishites who denounced monotheism and worshiped idols made of wood and stone but still enjoyed the blessings and favors of Allah. How does Surah Quraish relate to us in here and now?”

To those I say, it’s not only the Quraishites who enjoyed Allah’s blessings but every single human being has enjoyed the various divine favors and blessings of Allah, the Creator of the whole universe and all creatures.

{For, should you try to count Allah’s blessings, you could never compute them!} (An-Nahl 16:18)

All bounties and grace are from Him, Glory be His. We should all be grateful and thankful to Allah for such favors.

But what does it really mean to be thankful?

Being thankful to Allah means that one should worship Him alone and be obedient to Him and submit his will to Him at all times and in all circumstances.

True thanksgiving means that one should feel and appreciate these favors of Allah and not use them in a way that contradicts Islamic values and principles.

True thankfulness entails using Allah’s favors to share His guidance with others, to advocate justice, to defend the oppressed and to promote the truth.

Being thankful means that one should walk the talk and live in harmony and peace with others regardless of their faith, background, or color.

It also means that one should not use these favors to inflict any unjustified harm upon any other being, be it human, animal, plant, or even inanimate.

Being thankful means that one should emulate Prophet Muhammad (Peace and blessings be upon him) who was sent as a mercy to the worlds. Thus, one should show mercy to all, Muslims and non-Muslims alike.

A great hadith to reflect on

Finally, consider the following hadith, which sheds light on some of the bounties of Allah, many of which, we are completely oblivious to. You’ll see that it’s not only the Quraishites who enjoyed Allah’s blessings and bounties but all of us.

`Ubaidullah ibn Mihsan Al-Ansari (May Allah be pleased with him) reported:

Messenger of Allah (Peace and blessings be upon him) said,

“Whosoever begins the day feeling secure in his property, healthy in his body and has his food for the day, it is as if he owned the entire world” [At- Tirmidhi].

So when Allah grants you health, the freedom to move around and travel in safety all the while providing sufficient provisions for you and your family, this is so abundant! The most abundance anyone could ever have in this lifetime.

Therefore, we should start our day with being thankful and grateful to Him, Glory be His. We should use these bounties and favors in a way that shows obedience, glorification and remembrance of Him. And never forget Him or His graces!