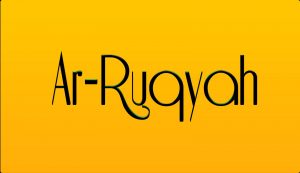 Islam, as a divine religion, has brought forth a notable effective means of ruqyah which goes in line with the sound Islamic creed and avoids the aberrant works of sorcerers.

Exorcism or incantation is an ancient practice found in most religions whether divine or earthly which involves specific religious charms, spells or practices with the purpose of healing. The hopeless cases, psychological diseases, and the damages caused by witchcraft and evil spirits are generally the field of these works as people lose hope in scientific medications and thus search for help of extraordinary means. Islam, as a divine religion, has brought forth a notable effective means of incantation which goes in line with the sound Islamic creed and avoids the aberrant works of sorcerers. There are many types of incantation which include devilish practices, abnormal actions, immoral exercises, or unknown matters which are prohibited in Islam. The Islamic code of faith insists on the prohibition of seeking help in matters that are beyond the human capacity from other than God, the All-Powerful and Omnipotent. These deviant practices are completely forbidden and are included in Shirk which is the most abominable action in Islam. Witchcraft and seeking the help of demons as well as idols contradict the Islamic faith and stand as a major sin in Islam.

Ruqyah is the Islamic form of exorcism or incantation which consists of selected verses from the Qur’an, parts from the authentic narrations from the Prophet (peace be upon him) and general supplications of healing and support of God. The verses of the Qur’an and the supplications narrated from the Prophet (peace be upon him) are the elements of ruqyah, which have proven effective in numberless cases. However, all the idolatrous practices, satanic works and witchcraft are untrue for the Islamic ruqyah because they are forbidden and helpless. The entire of the ruqyah consists of Qur’anic verses, Prophetic supplications and remembrances that all beseech the support of God Alone.

However, before delving into the issue of the Islamic ruqyah we should stress that Islam commands seeking the scientific ways for medication and confirms that leaving out the useful medication means as a prohibited action for which the Muslims is punished if he could do it and then leaves it out. Islam maintains that the blessing of health is a divine grant from God that should be preserved and looked after. Moreover, on the Day of Judgment, one will be questioned about what he has done with them.

There are a lot of texts that stressed the permissibility of ruqyah, provided that it does not contain any impermissible action. `Awf ibn Malik Al-Ashja`i narrated, “We practiced incantation in the pre-Islamic days and we said: “O Allah’s Messenger! What is your opinion about it?” He said: “Let me know your incantation and said: “There is no harm in the exorcism which does not involve polytheism.” (Muslim) Also, Abu Sa`id Al-Khudri reported: “We landed at a place where a woman came to us and said: “A scorpion has bitten the chief of the tribe. Is there any exorcist amongst you? A person amongst us stood up (and went with her). We had no idea that he had been a good exorcist but he practiced exorcism with the help of Surat Al-Fatihah and the (chief) was all right. They gave him a flock of sheep and served us milk. We said (to him): Are you a good exorcist? He said: “I did not do it but by the help of Surat Al-Fatihah.” He said: “Do not drive (these goats) until we go to Allah’s Messenger and find out (whether it is permissible to accept (this reward of incantation). So we came to Allah’s Messenger and made a mention of that to him, whereupon he said: “How did you come to know that this (Surat Al-Fatihah) could be used as an incantation? So, distribute them (amongst those who had been present there with him) and allocate a share of mine also.” (Muslim)

Conditions of the Ruqyah

Scholars put clear-cut conditions for any form of ruqyah to be permissible and beneficial:

First: The belief that healing is only from Allah

Both of the incantator and the patient must have firm faith that ruqyah does not avail anything by itself but it makes effect only by the permission of Allah Who is the source of healing and recovery.

Second: The ruqyah must be recited in understandable Arabic words.

Third: They ruqyah must not include any prohibited practices or sayings.

Fourth: The ruqyah should be taken from the Qur’an, the Sunnah, the most beautiful Names and Attributes of God and allowable supplications.

Fifth: The incantator should be neither a non-Muslim or a magician.[1]

The Effect of Ruqyah

As stated above, the ruqyah is a kind of supplication to Allah the Almighty Who possesses absolute power and the healer of every disease. God (Glory be to Him) may accept that supplication and remove the damage whatever it is or He does not respond to it. The entire effect of ruqyah is completely for God who may answer it or leave it out. Therefore, it is most required for both the incantator and the patient to have a strong relationship with God. They should be keen on performing what pleases God and abandon the misdeeds. They should not commit anything that spoils this relationship specially the major misdeeds, topped by Shirk.

Ibn Al-Qayyim said, “Supplication is one of the most effective causes for removing the damage and attaining what is desired but its effect may differ in relation to its weakness which results from involving something that God does not like. In this case, it will resemble a very slack crossbow which will push out the arrows in a very weak way (which gives no effect). Moreover, the answer of the supplication may be obstructed by (something prohibited such as) appropriating the unlawful properties, injustice, heavy sins on the heart, and the seizure of carelessness about God, material desires and distraction. In the Mustadrak of Al-Hakim, it is narrated from Abu Hurairah (may Allah be pleased with him) that the Prophet (peace be upon him) said, ““Call upon Allah while being certain of being answered, and know that Allah does not respond to a supplication from the heart of the one who is heedless and occupied by play.” (Ad-Daa’ wa Ad-Dawaa’)

There are different forms of ruqyah in relation to the type of ailment it is intended for. These types include:

Read how to make ruqyah for magic on this link: CLICK HERE

Ruqyah for sickness in general

Ruqyah for the evil eye