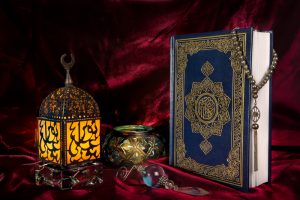 he fundamentals of the Islamic faith are based upon pure monotheismز

The fundamentals of faith are based upon pure monotheism, which means worshiping God alone without partner or intercessor.

Muslims believe in the One and Only God who is the most Merciful Loving Creator of existence. While separate from His creation, He is perfectly transcendental above and greater than anything we could ever perceive or completely understand.

To be a Muslim means that you believe in these fundamentals: God created this universe and every atom in it.

– God created the Angels.
– God created man and sent Prophets to both warn and give glad tidings to mankind.
– God revealed the Books or Scriptures . There were many scriptures sent to mankind
throughout history. The Scriptures of Abraham, Torah, Psalms, and Gospel of Jesus are
mentioned by name in the Quran.

– All humans are accountable for their chosen faith and actions and will be called to
account on the Day of Judgment accordingly.
~God’s infinite knowledge and will prevail over everything in this universe.

He is the creator of time and that which exists within it, thus He is not part of time or governed by it. God sent prophets to mankind to guide us to all that is good for us in this life and in the Hereafter and warn us of a punishment for spreading corruption and injustice.

Muslims believe that God sent Prophets (peace be upon them all) to all people beginning with Adam and including Prophets like Noah, Salih, Abraham, Ishmael, Isaac, Jacob, Joseph, Hud, Moses, David, Thul-kifl, Jesus, Muhammad, and thousands of others. We say ‘thousands of others’ because God revealed in the Quran that He sent a guide to all peoples and generations throughout history with only 25 being mentioned in the Quran.

All Prophets were chosen from among certain nations by divine decree to receive and deliver the message of God. A complete stranger or outsider was not sent to guide them but rather God chose someone that everyone knew as an upstanding and truthful member of society.

For example, the Prophet Muhammad (peace be upon him), was labeled as “Al-Amin” (the honest and trustworthy) by his peers, or, before he received his mission from God.

God’s final message to humanity was revealed through Muhammad and is a reconfirmation of the eternal message found in the other books of God, which were previously corrupted by man. This message is comprised of two texts: The Quran, which are the exact words of God preserved for eternity in the Arabic language and the Sunnah, which refers to the authentic sayings and actions of the Prophet, which were recorded and memorized by his companions and their followers.

The Sunnah is the practical example of the guidance found in the Quran. Muslims believe in everything that is found in the Quran without exception. The Sunnah has been subject to meticulous scrutiny by a thorough science of verification. What has been deemed as authentic through multiple transmissions is accepted just as the Qur’an.

It does not take a rocket scientist or someone with a degree in Quantum Physics to understand the Quran, the Sunnah or the message that God wants us to understand. All the Messengers of God implored their people to use their brains and open their eyes to ‘see’ God in His Creation. “Seeing is believing,” or so the saying goes! All humans need to do is to look around them! What is more beautiful than watching a star shoot across the sky? Is there anything more awe-inspiring than a spider weaving an intricate web that is 100 times larger than its own body?

Common sense shows us that this Universe was planned right down to the last blade of grass in a lush garden. The entire universe is filled with various signs that remind us of the power, the beauty, and the creativity of the Creator. Everything in this universe exists and functions in an orderly manner. Everything we see did not simply evolve on its’ own but came from a source. This source is God and God only.

If there were, in the heavens and the earth other gods beside God, there would have been chaos (ruin) in both! Glory to God, the Lord of the great throne of majesty, above what they attribute to Him. (Al-Anbiyaa 21:22)

Just as God plans and organizes everything, He planned and organized the guidance He sent to His Prophets so that we may know our way back to Him. Without this, on what basis could He judge us? Are we all capable of forming our own guidance? Will our desires and whims not get in the way of pure morality?

Just look at the decline of morals and family values in the liberal west. This is a direct result of marginalizing or even canceling God and His message out of our daily life.

Islam does not demand blind belief but rather encourages people to seek knowledge, ask questions and rise to the challenge of shedding away the trappings of this World for the sake of salvation and true happiness in harmony with the message of God.