“See you not that whoever is in the heavens and whoever is on the earth, the sun, the moon, the stars, the mountains, the trees, Ad-Dawab [moving (living) creatures, beasts], and many of mankind prostrate themselves to Allah?! But there are many (men) on whom the punishment is justified.” (Al-Hajj: 18)

If you do not pray, then you will be among those on whom the punishment is justified. 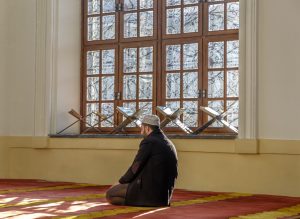 All creatures prostrate to Allah

Indeed, the hypocrites [think to] deceive Allah, but He is deceiving them. And when they stand for prayer, they stand lazily, showing [themselves to] the people and not remembering Allah except a little.” (An-Nisa’: 142)

Do you not see that the hypocrites during the time of the Prophet (peace be upon him) would pray, although to be seen, while you don’t pray at all?!

And whoever turns away from My remembrance – indeed, he will have a depressed life, and We will gather him on the Day of Resurrection blind.” He will say, “My Lord, why have you raised me blind while I was [once] seeing?” [ Allah ] will say, “Thus did Our signs come to you, and you forgot them; and thus will you this Day be forgotten.” (Ta-ha: 124-126)

What a pity and a waste! How is it that the years of your life are passing, and your heart is veiled from worshiping Allah; how can you depart this life and you did not taste the best of it?! Indeed the best of this life is worshiping Allah, mentioning Him and expressing your gratitude to Him.

Repent, O heedless one, to Allah, before death comes to you while you have abandoned the prayer.

O you who have slackened in your prayer!!

What are you going to do after you learned about the great virtues of prayer?

What are you going to do after knowing the abundant awards set for those who pray?

What are you going to do after you learned about the punishment awaiting those who abandon it?

Are you going to continue slighting and neglecting your prayer?

Will you still insist to sleep through your prayers or delay them after their prescribed times?

Source: Respond to the Call of Prayer’s Book.