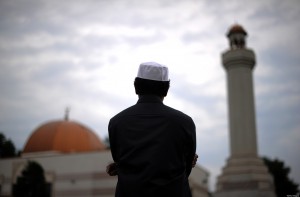 If you think Muslims are being tried, you have company. Millions of Muslims are thinking likewise.

If you think Muslims are being tried, you have company. Millions of Muslims are thinking likewise. In fact, even non-Muslims are wondering about the downward spiral of the once-dominant Islamic civilization.

No doubt we are in a prolonged period of trial, prolonged from our standard, as Allah’s measurement of time is different. The Qur’an says:

He arranges (every) matter from the heavens to the earth, then it (the matter) will go up to Him, in one Day, the space whereof is a thousand years of your reckoning. (As-Sajdah 32:5)

It is clear from the Qur’an that a couple of centuries of our suffering translate to less than a day for the Creator of time. Yet, our hasty nature makes us complain. Many of us just cannot fathom why people with the best Book of Guidance, the Qur’an, should be in the worst situation. From the Middle East to Central Asia and Africa to Asia, Muslim lands are ruled, with few exceptions, by tyrants who are enemies of spiritual, material, and technological progress.

Muslim lives in general are caught up in an ongoing cycle of violence, fear, stagnation and despair. A United Nations report on the Arab world a few years ago highlighted the shocking backwardness of the Arab societies. For example, it said that for all the books published in the Arab world in a year, Spain alone published more! It’s hard to imagine a worse tribute for Muslims whose religion began with word iqra’ (read)! Through the tyranny of Muslim leaders and decadence of our societies we are being tried, and there seems to be no end in sight.

Who Is to Blame?

People often take trials to be a bad thing. Yes, trials can be a form of punishment from Allah for our transgressions, but they may also be a means of cleansing our sins and elevating our status in Paradise, provided we patiently endure them. One thing is certain: there is no escaping the trials. In some of the most lucid verses of the Qur’an, Allah says:

And certainly, We shall test you with something of fear, hunger, loss of wealth, lives and fruits, but give glad tidings to the patient ones, who, when afflicted with calamity, say: “Truly! To Allah we belong and truly, to Him we shall return.” They are those on whom are the blessings from their Lord, and (they are the ones who) receive His Mercy, and it is they who are guided. (Al-Baqarah 2:155-157)

And in another verse, Allah challenges the believers:

Do you think that you will enter Paradise before Allah tests those of you who fought (in His Cause) and (also) those who are patient? (Aal `Imran 3:142)

Looking around today, we find that a lot of Muslims are mishandling the bad events of our time; they are complaining and blaming others. Faced with the turmoil in their societies, some of them are selling and betraying fellow-Muslims for power, money or to save themselves and their families from harm. In some cases, they have become enemies of their brethren, raiding mosques, arresting scholars or killing them for taking a stand for the truth.

The Muslim disunity and betrayal of each other is a big part of our current trial. It’s not just others who are bent upon our destruction; our own actions are aiding and abetting the enemy.

What Is to Be Done?

Firstly, we should unite and persevere in the path of Truth no matter how intense the trials are.

If we think that the persecution of Muslims by their own hands and the draconian laws being devised against them around the world are water over the bridge, we are mistaken. Other nations have been tested more intensely, as the Qur’an records:

Do you think that you will enter Paradise without such (trials) as came to those who passed away before you? They were afflicted with severe poverty and ailments and were so shaken that even the Messenger and those who believed along with  him said, “When (will come) the help of Allah? ” Yes! Certainly, the help of Allah is near! (Al-Baqarah 2:214)

This was the reason why the Prophet became upset when a Companion came complaining to him about the severity of persecution in Makkah. He told him about the hardships the followers of other prophets underwent.

Muslims enjoyed centuries of progress and prosperity, but when they forsook the Straight Path and began building palaces and going after desires they debased themselves and invited the same fate as befell others before them. Allah had warned them:

And be not like those who forgot Allah and He caused them to forget their own selves. (Al-Hashr 59:19)

However, there is a timeless promise from Him, a promise of victory for those who honor their covenant with Allah, as recorded in the Qur’an:

Allah has promised those among you who believe, and do righteous good deeds, that He will certainly grant them succession to (the present rulers) in the earth, as He granted it to those before them, and that He will grant them the authority to practice their religion, that which He has chosen for them (i.e. Islam). And he will surely give them in exchange a safe security after their fear. (An-Nur 24:55)

Secondly, realizing that Muslims are being tried is a good start. It honestly reflects the reality of our situation. The next logical step is to examine its causes and make amends. Trials are from Allah’s decree, and our actions are a part of that decree. More than anything else, trials are a cleansing process, an expiation of our sins, and a factor behind the raising of our status, only if we understand and persevere through them patiently.

However, despite the inherent benefits of trials, we should never stop working to reform ourselves. In so doing we will not contradict the decree of Allah. Muslims should remember and firmly believe that Allah does not change the condition of a people until they change what is within them.

While the ordinary Muslims struggle, there is a big responsibility on the observant Muslims to move beyond personal piety and become muslihun (reformers of their societies).

Even though the picture of the Muslim Ummah seems all too gloomy today, we need to seek solace in Allah’s promise that with every difficulty there is ease.