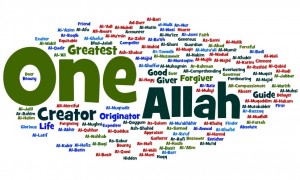 Fully accepting the oneness of God is to accept that He is distinct from everything else.

Concept of God as Believed by Muslims

Monotheism, belief in one God, is the most important and foundational concept in Islam. Muslims believe in one God who created the universe and has power over everything within it. He is unique and exalted above everything He creates, and His greatness cannot be compared to His creation. Furthermore, He is the only one deserving of any worship and the ultimate purpose of all creation is to submit to Him. The Islamic understanding of God is distinct from all other religions and beliefs in various respects since it is based on a pure and clear understanding of monotheism. This essentially captures the concept of God in Islam, which will be further elaborated in this pamphlet.

Muslims often refer to God as Allah. This is a universal name for God and does not refer to an exclusively ‘Islamic’ God. Interestingly, this name is related to the Aramaic and Hebrew names for God, Allaha and Elohim. Therefore, Allah is simply the Arabic name for God which affirms that He is One singular God with no partners or equals. The name Allah cannot be pluralized or limited to a specific gender, which establishes that God is One and that He is unique from everything He creates. Muslims continue to use this original Arabic name for God (Allah) since it perfectly expresses His unique qualities.

God is the Creator and the Sustainer of the universe who created everything for a reason. Muslims believe that He created humankind with a simple purpose – to worship Him. He sent messengers to guide people in fulfilling this purpose. Some of these messengers include Adam, Noah, Abraham, Moses, Jesus, and Muhammad, peace be upon all of them. They all taught a consistent message about God by affirming His greatness as the Creator and guiding people to worship Him alone. This basic concept has always resonated with people’s natural understanding of God.

When the final prophet, Muhammad, peace be upon him (pbuh), was asked about God, the answer came directly from God in the divine book of Muslims, the Qur’an (also spelled ‘Koran’):

This is a clear statement by God describing Himself to humanity without any room for confusion. God is One and is exalted above everything He creates and He is capable over all things.

Fully accepting the oneness of God is to accept that He is distinct from everything else. It would not suit God’s majesty and glory to associate the limited attributes of His creation to Him because He is not restricted in any way, while His creation is. He is the First with no beginning and the Last with no end. Everything in the universe was created by His will. He is not confined by space or time and He is the only One who is in control and provides for His creation.

“God: there is no god but Him, the Ever Living, the Ever Watchful. Neither slumber nor sleep overtakes Him. All that is in the heavens and in the earth belongs to Him. Who is there that can intercede with Him except by His leave? He knows what is before them and what is behind them, but they do not comprehend any of His knowledge except what He wills. His throne extends over the heavens and the earth; it does not weary Him to preserve them both. He is the Most High, the Tremendous.” [Al-Baqarah 2:255]

The primary pillar of Islamic belief clearly states that there is nothing worthy of worship except God. Associating partners with God or attributing qualities of lesser beings to Him is considered to be the greatest sin in Islam.

In the past, this often took the form of idol worship or praying to multiple lesser gods. Although this is less common now, the current era has replaced many of the physical ‘idols’ of the past with other contemporary ‘gods.’ Many people today allow passions like entertainment, drugs, relationships or material objects to become the center of their lives. They become so consumed with these things that they submit to whatever will allow them to fulfill their desires. For example, if a drug addict allows their addiction to control their actions, beliefs, feelings, and behaviors, causing them to risk their personal safety and the safety of others, that drug has essentially become their god. Likewise, if another person puts a loved one before God by obeying that person even if that causes them to transgress against God’s commands, their loved one has taken precedence over God.

Islam teaches that people should completely submit only to God as He is the only One worthy of their worship. He is the Creator and Sustainer of the universe and everything in it belongs to Him. The Qur’an points out the faulty thinking of those who worship other than God:

“‘How can you worship things you carve with your own hands, when it is God who has created you and all your handiwork?’” [Al-Saffat 37:95-96]

In order to be a true believer, one must believe in the absolute oneness of God, as the only Creator, Preserver and Nourisher of everything. However, this belief in the true characteristics of God is not the sole condition of true faith; one must also acknowledge that God is the only one who deserves to be worshipped. His commands and guidelines for how to live one’s life should always take precedence over the commands of anything He created. Indeed, He guides humanity to what is best for them in this life and the hereafter and He is All-Knowing and All-Wise.

Having embraced this understanding of God, one should constantly have faith in Him, and should remain steadfast on the truth. When true faith enters a person’s heart, it positively impacts their outlook and behavior. The Prophet Muhammad (pbuh) said, “Faith is that which resides firmly in the heart and which is proved by actions.”

One of the striking effects of faith is a feeling of gratitude towards God. Believers love God and are grateful to Him for the blessings He gives them. They are aware of the fact that their good deeds will never be equal to His divine favors upon them so they are always striving to please Him. Furthermore, sincere believers in God accept that any hardships they face are part of the greater ‘test of life.’ They are patient through times of difficulty and turn to God for assistance. A beautiful characteristic of the believers is that they accept everything God wills and continuously remember Him in all aspects of life.

Anyone who denies the basic truth of the existence of God is considered ungrateful and a disbeliever. On many occasions in the Qur’an, God reminds humanity of the disbelievers’ clear misguidance and His complete power over everything:

“Behold! Verily to Allah belong all creatures, in the heavens and on earth. What do they follow who worship as His “partners” other than Allah? They follow nothing but fancy, and they do nothing but lie.” [Yunus 10:66]

“It is God who has given you the night in which to rest and the day in which to see. God is truly bountiful to people, but most people do not give thanks. Such is God your Lord, the Creator of all things: there is no god but Him. How can you be so deluded? [Ghafir 40:61-62]

In the end, we must understand that our belief or disbelief in God does not affect Him in any way. Believing in Him, worshipping Him, and following His commands will only benefit us because we are in need of His blessings, favors and mercy. On the other hand, He does not need us because He is the Self-Sufficient Creator. However, it is never too late for a person to turn back to God, seeking His guidance and forgiveness by submitting to Him.

“Say: “O my Servants who have transgressed against their souls! Despair not of the Mercy of Allah: for Allah forgives all sins: for He is Oft-Forgiving, Most Merciful. Turn ye to our Lord (in repentance) and bow to His (Will), before the Penalty comes on you: after that ye shall not be helped. And follow the best of (the courses) revealed to you from your Lord, before the Penalty comes on you – of a sudden while ye perceive not!” [Al-Zumar 39:53-55]

If you agree with the basic concepts in this pamphlet, you may still ask why Islam stands out from other religions. The reason is simply that Islam is the final and complete way of life that God revealed to guide humanity. Previous divine messages (such as the ones taught by Abraham, Moses and Jesus) have been lost or altered throughout time. God chose to send Muhammad (pbuh) to deliver His final message, which maintains the core teachings of all the previous revelations. The book sent to Muhammad (pbuh) was the Qur’an, which was revealed as guidance for all of humanity. Just like the Torah sent to Moses and the Gospel sent to Jesus, the Qur’an is a guidebook teaching us how to worship God in the purest manner and thereby achieve our purpose in life. The Qur’an is unique because it has remained preserved in its exact and original form for more than 1,400 years.

Islam is not a new way of life; rather, it is the final message, which upholds the same essential beliefs that God sent to humanity through all of His messengers. Through this message, God calls on each individual to lead a conscientious life by drawing close to Him and to remain cognizant of their final accountability in front of the one and only God.

“Has the time not come for those who have believed that their hearts should become humbly submissive at the remembrance of Allah and what has come down of the truth?” [Al-Hadid 57:16]