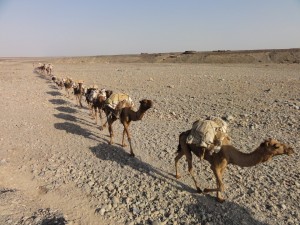 News reached the Muslims about a very large Makkan trading caravan that was headed northwards towards Ash-Sham loaded with a large quantity of wealth and merchandise.

News reached the Muslims about a very large Makkan trading caravan that was headed northwards towards Ash-Sham (Syria and surrounding regions) and that was travelling with a large quantity of wealth and merchandise.

The caravan was headed by Abu Sufyan and was guarded by thirty-four men. Seeing an opportunity of getting back at least part of what the Quraish had stolen from the Muslims, the Prophet (peace be upon him) sent a man named Basbas ibn `Amr to gather information about the caravan. When Basbas returned with sure news of the caravan, the Messenger of Allah (peace be upon him) exhorted his Companions to accompany him in order to go out and overtake the caravan. He said to them, “This is the caravan of the Quraish (coming), and in it is their wealth, so go out to it, and perhaps Allah will grant it to you as booty.” (Muslim) The Prophet then left Madinah on the twelfth of Ramadan, in the year 2 AH.

The Muslims of Al-Madinah and the polytheists of Makkah were in a state of war. Muslims knew that the wealth that the Quraish men were carrying with them towards Ash-Sham was wealth that belonged to Muhajirun (migrant) Muslims. I should note that when the Muslims of Makkah left to migrate to Al-Madinah, they left, for the most part, in a hurry, afraid of being captured by Quraish to be returned to Makkah, and then tortured for trying to escape. And so the vast majority of them left their wealth behind in Makkah, and even if some of them took part of their wealth with them, they could not take along their properties and houses.

What the Quraish then did was truly vile and reprehensible: they wrongly seized all of the wealth that the Muslims left behind, claiming it for themselves. So it was not just a matter of war – which it partly was – but it was also a matter of getting back some of the wealth that was unjustly taken away from the Muhajirun (Muslim migrants).

When he set out for Badr, the Messenger of Allah (peace be upon him) charged `Abdullah ibn Umm Maktum with the duty of leading Muslims in prayer in Al-Madinah during his absence. Later on during the expedition, when he (peace be upon him) had reached Ar-Rauha, the Prophet sent Abu Lubabah  back to Al-Madinah, appointing him as its temporary governor.  The Prophet also sent two of his Companions ahead to act as scouts and to bring back news about the caravan; they went and later returned, informing the Prophet (peace be upon him) about what they saw.

As for the Prophet’s army, even authentic sources differ slightly over the number of Companions that accompanied the Prophet on his expedition to Badr. Imam Al-Bukhari mentioned that they were three hundred and Bid`a (Bid`a means any number from three to ten, so it is a word used to express an approximation) men; Imam Muslim was more explicit, saying that they were three-hundred and nineteen men. Meanwhile, other sources mentioned the names of three-hundred and forty Companions that participated in the Battle of Badr.

The Muslim contingent that was headed for Badr in no way represented the full military potential of Al-Madinah. Many Muslims remained behind in Al-Madinah, since the purpose of the expedition was only to confront and overtake the Makkan trading caravan that was headed by Abu Sufyan. The Muslims did not know that the expedition was going to end in a full-scale battle against the army of the Quraish, which consisted of one-thousand fighters, two-hundred horses that rode alongside their camels, and even female singers that accompanied the soldiers in order to give them encouragement and to sing songs in which they satirized the Prophet (peace be upon him) and his Companions (may Allah be pleased with them). Meanwhile, the Muslims had with them only two horses and only seventy camels, a shortage that made it necessary for them to take turns riding the camels on their way to Badr.