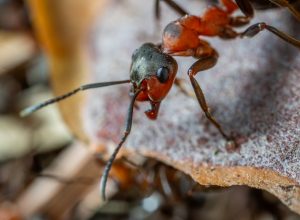 One of the most feared animals of the forests is the legionary ant. The reason for the name “army” being given to this ant community is their acting under a true military discipline.

Legionary ants are carnivores and they eat up everything in sight. Each ant is 6 to 12 millimeters long, but their incredible number and discipline make up for the disadvantage of their small size.

Direct sunlight may kill the legionary ants in a short time. Therefore, they travel either at night or in the shade. Due to their sensitivity to light, they dig long tunnels while advancing. Most of the ants run in these tunnels without going outside. This does not decrease their speed, because they can dig the tunnels very fast with their strong mandibles. Thus, running is both fast and secret. Legionaries move as very large armies, going over all obstructions except fire and water, although they are totally blind.

Legionary ants tear their prey apart where they find it and carry small pieces of it to their temporary nests. Quite a lot of food is needed for a legionary ant colony. The approximate daily need of a medium size colony, consisting of 80,000 adult ants and 30,000 larvae, is about half a gallon (2.27 liters) of animal product food.

Since legionary ants do not have a fixed nest, they are always moving. The movements and migrations of the colonies depend on the production cycle. The queen produces approximately 25-35,000 eggs during two days each month. A few days before the laying of the eggs, the colony halts and gathers in a wide area. The ants hang on to each other by their hook shaped legs and form a temporary nest. The empty space in the middle acts as a chamber ready for the queen and the new generation. Here, naturally, the legs and joints of the ants at the very top are subject to excessive loading. Yet, since they are built to endure weights several hundred times more than their own weights, they can hold the whole colony without much problem.

To hunt most efficiently, the ants time their movements to the needs of a developing brood, alternating between sedentary and nomadic phases. During the resting period of about 20 days, the fat, immobile queen produces 50,000 to 100,000 eggs while other offspring lie in the quiescent pupal stage. On most days, workers, foraging only for themselves and the queen, make short raids from the nest in a rosette pattern. On each raid they vary their direction by an average of 123 degrees, thus avoiding re-combing the same ground.

Ants can unerringly calculate the 123° by themselves, something which man cannot calculate without an instrument. This would appear to indicate a thorough knowledge of mathematics. Yet ants do not know math, they cannot even count. So this shows that what they do is done by special inspiration, and not consciously.

When the first larvae hatch, workers collect food and, in the meantime, the community stays stationary. Pieces of food are fed directly to the larvae. The queen’s being ready for laying again usually coincides with earlier larvae’s transition into the pupa stage. In this stage, the community stops once again. The coinciding of the laying of eggs by the queen and the larvae going into the pupa stage indicates a conscious planning since it decreases the time for which the army stops.

The development of larvae prompts the older ants to start a new migration cycle. This is how it works: larvae give out a secretion when they are licked and cleaned by the workers. Research has shown that this fluid is effective in the decision to migrate.

It would be a weakness of logic to claim that larvae which have not even gained the identity of an ant yet, have thought of secreting such a fluid and have directed the whole colony towards fulfilling their needs. The only thing that a smart observer can spot is the existence of a supreme Creator and His information and sovereignty that are all around us.

Taken with slight editorial modifications from a book on the amazing creature of Allah by A. O.