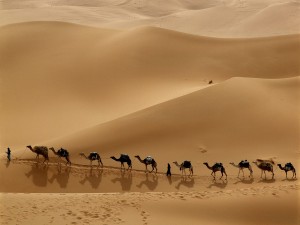 The story of the monk Buhayrah provides us with many insights into the life of the Prophet.

Abu Talib (the uncle of the Prophet) would often travel to Ash-Sham (Syria and surrounding regions) and elsewhere for business purposes. On one such journey, he took the Prophet (peace be upon him) along with him; also accompanying them were Makkah’s chieftains. When their caravan overlooked the monastery of the monk Buhayrah, they made camp and began to unload some of their supplies.

Meanwhile, to their surprise, Buhayrah was coming out to meet them. What was so surprising was that though they had frequently stopped beside his monastery on previous business trips, he would never come out to meet them or even pay any attention to them at all.

As they were removing some of their things, Buhayrah began to walk among them, until he reached the Messenger of Allah. He stopped, took the Messenger by the hand, and exclaimed, “This is the chief of the`Alamin (i.e., mankind, Jinns, etc.). This is the Messenger of the Lord of all that exists. Allah will send him as a (form of) mercy to all that exists.’ The chieftains of the Quraysh said, “And what makes you know this?” He said, “When you overlooked (this place), as you were arriving from `Aqabah, every single tree and stone (in the area) fell down in prostration, and they do not perform prostration for anyone save a Prophet. And indeed, I know him from the seal of Prophethood that resembles an apple (in shape) and that is located below his shoulder blade.”

He returned to his monastery for a while in order to prepare food for them. When he returned with the food, the Messenger of Allah (peace be upon him) was busy watching over their camels. Buhayrah requested that they call him to join them in their meal. He came to them, and there was a cloud above him giving him shade. When he arrived, he found that everyone else had beaten him to the shade of the tree; nonetheless, when he sat down, the shade moved towards him and covered him. Seeing this, Buhayrah said, “Look! The shade of the tree has moved to cover him.”

Buhayrah told Abu Talib and the other chieftains that they should return with the Prophet to their homeland; he particularly pleaded with them not to take him to the lands of the Romans, for if the Romans were to know about him and were to see the signs of his Prophethood, they would certainly kill him.

As he was explaining this to them, he turned around and saw seven Romans approaching. He went to them and asked them what they wanted. They said, “News has reached us that the (awaited) Prophet is coming out during this month. Every road has been blocked with guards, and we were sent to watch over this road.” Buhayrah said to them, “Suppose Allah wants a matter to be fulfilled; can any person prevent that from happening?”

They said, “No.” He said, “Then, pledge allegiance to him.” They then joined the chieftains of the Quraysh and did no harm to the Prophet. But by this point, Buhayrah was becoming very worried; he had managed to convince these guards to leave the Prophet alone, but there was no telling whether more guards were on the way or whether the Prophet would be identified at a Roman checkpoint. And so he said to the chieftains of the Quraish, “I insist that you tell me who his guardian is.” They said, “Abu Talib is his guardian.” Buhayrah then continued to plead with Abu Talib until the latter finally took his advice to heart and sent the Prophet back home to Makkah.”(1)

The story of Buhayrah provides us with many insights into the life of the Prophet:

First, we learn that not all priests and rabbis distorted their revealed books. There were some among them, albeit very few in number, who were sincere and truthful, and who openly acknowledged that Muhammad (peace be upon him) was indeed a Messenger to all of mankind. They knew this from the signs and descriptions that they found in their revealed books.

Third, as precocious as he was by inherent nature, the Prophet (peace be upon him) also benefited from accompanying his uncle on business trips, particularly when Quraysh’s chieftains also accompanied them.

During such journeys, the Prophet benefited from the experiences and knowledge of wise men from both the Quraysh and foreign tribes.

Fourth, Buhayrah knew that if the Romans found out about the Prophet, they would kill him. This was significant because, at the time, the Roman Empire extended into the lands of the Arabs, particularly Ash-Sham (Syria and surroundings regions). And so the Romans knew that the awaited Messenger, who was to come from the Arabs, would bring an end to their imperial control over the region. Since the Prophet was a threat to the interests of their empire, Romans both feared him and ardently desired to first find him and then kill him.

* Ali Muhammad As-Sallabi  is a Muslim religious scholar from Libya. He studied theology in Saudi Arabia and Sudan and obtained doctorate in Islamic studies from the Omdurman Islamic University.