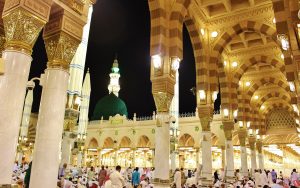 In this series (Biography of Prophet Muhammad), Sheikh Yasir Qadhi gives a detailed analysis of the life of the Prophet (peace be upon him) from the original sources.

In this episode, Sheikh Yasir Qadhi continues his reflections of the physical appearance, characteristics and manners of Prophet Muhammad.

Anas reported that:
Prophet Muhammad had a very fair complexion and (the drops) of his perspiration shone like pearls, and when he walked he walked inclining forward, and I never touched brocade and silk (and found it) as soft as the softness of the palm of the Prophet and I never smelt musk or ambergris and found its fragrance as sweet as the fragrance of the Prophet. (Muslim)

I heard Anas ibn Malik describing the Prophet saying, “He was of medium height amongst the people, neither tall nor short; he had a rosy color, neither absolutely white nor deep brown; his hair was neither completely curly nor quite lank. Divine Inspiration was revealed to him when he was forty years old. He stayed ten years in Mecca receiving the Divine Inspiration, and stayed in Medina for ten more years. When he expired, he had scarcely twenty white hairs in his head and beard.” Rabiah said, “I saw some of his hairs and it was red. When I asked about that, I was told that it turned red because of scent.” (Al-Bukhari)

I heard Kab ibn Malik talking after his failure to join (the Ghazwa of) Tabuk. He said, “When I greeted Allah’s Messenger whose face was glittering with happiness, for whenever Allah’s Messenger was happy, his face used to glitter, as if it was a piece of the moon, and we used to recognize it (i.e. his happiness) from his face.” (Al-Bukhari)

Watch the video to know more about the broad characteristics of Prophet Muhammad: