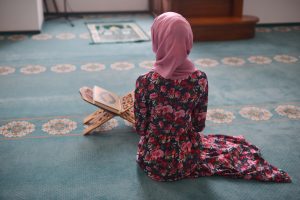 The Quran gave women rights of inheritance and to keep their identity and family names after they got married..

When people see a Muslim woman on the local High Street, covered from head to toe, exposing nothing but her eyes or her face and hands, all sorts of thoughts and images enter their minds.

Feelings range from curiosity and pity, to complete horror at what looks like a religion that deems women inferior. What doesn’t really seem to add up is that even though Islam seems to be the least appealing way of life for women, more and more intelligent, educated, independent women in the West feel that Islam showed them what it was to be true to their womanhood and are actually choosing to live as Muslims. Now why would they want to do that?

To be honest, I would completely understand why someone might think Islam was an unattractive choice for women. When Islam is mentioned in the popular media, it is often mentioned alongside horrible stories and without much of an explanation from a Muslim perspective.

On top of that, there are some Muslims out there who are doing terrible things that are either twisted interpretations or cultural practices and have nothing to do with the religion of Islam – in fact they are things that Islam is against.

But wouldn’t you agree that to judge a religion merely by looking at the actions of some of the people who claim to follow it is not really fair? I mean, surely to get a true understanding of Islam, we’ve got to look at what its teachings are, what its book says about it – not just at the behavior of some people who call themselves Muslims. And to get an unbiased understanding, we’ve got to approach the topic with an open mind – not allowing the things we’ve read in the papers or seen on TV to colour our view.

Straight from the Horse’s Mouth

Everybody seems to have an opinion on Muslim Women: from Presidents of European states to the local cab driver and you’ve probably heard everyone’s views, except the views of the women themselves!

Well, my name is Fatima and I am the busy mother of 4 children. I’m a journalist and a Londoner born and bred and this is a chance for you to hear from me; a Muslim woman, in my own words, how Islam affects my experience of womanhood.

You see the thing is, the way I see my role as a woman is completely linked to the conclusions I’ve come to about the meaning of life – and they are very rational, common sense conclusions. That the Universe has a cause – a Creator and that Creator sent us guidance and created us with a purpose that is not merely materialistic. That the Creator sent us a manual to guide us through life and an extraordinary individual –Muhammad– to teach us that way of life.

When I realized the truth about the purpose of my life by reading the Qur’an, I found it to be incredibly empowering. It empowered me by telling me not to be subservient to created things: to men, to the media, to fashion, to what other people think and dictate to me. It showed me that the way to be free from subservience to created things was to submit to my Creator. That’s exactly what Islam means: submission to our Creator.

Surely in Allah’s remembrance do the hearts find peace. (Ar-Ra`d 13:28)

A Man Championing the Rights of Women?

If you were to research into Muhammad’s life you would find a man of the most impeccable character. His morals and integrity were so outstanding that people would accept his message just by seeing the way he behaved.

There was a lady who used to wait for the Prophet Muhammad to go past her home and then she would throw rubbish on him every time he passed her house due to her hatred for his message. One day she didn’t throw any rubbish over him as he passed by. Anyone else in that situation would’ve been glad! But the Prophet went and knocked on her door and inquired after her asking: is everything alright, are you well, is there anything I can do for you?” She immediately realized what extraordinary forbearance he had and declared her faith. Only a person of God could have such character.

He was the first man in history to stand up in front of a whole nation and speak about the rights of women. Really! He was the first world leader to tell men: Honor your womenfolk, treat them kindly, the best of you is the one who is the best to his wife and respect the wombs that bore you. He elevated the status of women as builders of society.

Now if we go back in time for a moment – one thousand four hundred years back to be precise, we realize that there’s so much we take for granted as women living in the 21st century…we have rights that women years ago never dreamed of.  In Arabia for example, before the coming of the Prophet Muhammad, women essentially belonged to men. If a man died, his wife was part of the wealth that his heirs would inherit. Female babies, used to be buried alive because families thought that girls were just a burden.

The message that the Prophet Muhammad came with changed all of that and upset the men who wanted to keep things the way they were. But what he said was a message from the Creator of women it wasn’t something that he invented himself. The Prophet Muhammad told women that they were equal to men: just as important as men spiritually, socially, as individuals and as members of society.

The Quran gave women rights of inheritance and to keep their identity and family names after they got married. In European countries women would change their names when they got married signifying that they now belonged to their husbands.

He told men that women were to be respected and not used as sexual objects or abused and that they must take full financial responsibility to provide and nurture their marriage partners and any children they father, even if the marriage breaks up. He condemned the killing of baby girls and encouraged raising daughters with as much pride as sons. He said that women should never be forced to marry against their will and should be able to choose and refuse.

He encouraged women to study and learn and in fact his wife Aishah was one of the greatest and most knowledgeable jurists and teachers in Islamic history. If there are men in the world who are stopping women from being educated, they are going against the teachings of Prophet Muhammad.

These were all revolutionary ideas that are relatively new even to Europe and the Western World. Yet Muhammad was saying these things 1400 years ago.