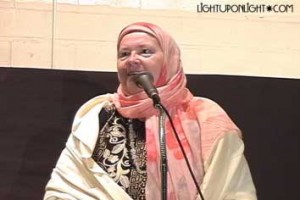 Margaret Templeton who became Maryam Noor at the age of 65

My name is Maryam Noor, that is my Islamic name, and my original name is Margaret Templeton.

For as long as I can remember, I have been seeking the Truth about why I am here in this world, what I’m here for, what am I supposed to do.

As soon as I became old enough, I began to search for some information about this “person called God”, that people mention, and all through my life, I have been seeking the Truth, not a particular religion. The Truth, something which made sense to me, something which opened my heart and which made my life worthwhile. I have been practically in every church in the kingdom, both here and at home, it never occurred to me to think about Islam.

I became interested in Islam, but the war took place in Iraq, and I read the terrible things which were being said in the papers about Muslims, but I was well educated about other religions to know that these things were not true, that lies were being told, and so I went seeking for a teacher who could teach me something about the Islamic way of life, so that I would be able to refute these things that were being said about Muslims which were wrong, which were lies, and which came from shaytan, or Satan as I called him then.

One of the things that I do is that I talk to everyone. I used to smile to everyone and say “Hello”, “How are you”, and “What’s your day like” .. as Jesus spread happiness whenever he was. At that time I was a Roman Catholic but I was very unhappy and I left the Church, and I didn’t know where to go.

A friend of a friend of a friend brought me the name of an alim – a scholar. His name was Nur El-Din, and he was an Arab born in this country. He invited me to come to his house, which I did, and he told me what books to buy, and that I could call him if I had questions. And that was our relationship. There were seven volumes of this book, it was a commentary on the Qur’an, and it was excellent.

So I started to study. I opened the first book, I read the acknowledgement. I did not start from the back, I started from the front, and I was immediately in Al-Baqarah. And before Al-Baqarah, there was Al-Fatihah, and I read Al-Fatihah, and it was like I was struck by lightning, tears flowed from my eyes, tears like Niagara Falls. My heart beat very quickly, … I was sweating, I was shaking, … I was afraid this was shaytan, like he was trying to stop me because I might find the way, because this book might get me the way to Truth, which is what I was seeking.

I phoned the alim, he said come I want to see you. So I went to him in the depth of winter, and I arrived there like a block of ice, but a little suffering is nothing for Allah as I found. And I explained my experience to my alim. I said this is shaytan, what should I do? One of the things which took place during these tears was I saw my heart, I could see my heart out here, red, very large, rather bright, not shaped like it at all. I was rather frightened, and I said what do you think I should do?

And he said to me “Margaret” he said, “you are going to become a Muslim”.

And I said “But I am not reading these books in order to become a Muslim”.

“I am reading them in order to be able to refute the lies that are being told about the Muslim people.”

“I don’t want to become a Muslim”.

And he said “Well Margaret, you are going to become a Muslim, because I must tell you, there has been divine intervention in your life.” I was 65 years old. I am now 66. I have been a Muslim for one year.

I went on studying with the alim, from about November to February, and I could not wait any longer to do my shahada, and I asked him do you think it is too soon for me to come, because I really don’t want to become a Muslim, but I’m sure I will learn and God will forgive me that I had not appreciated this great gift that He gave me. I was not hateful of appreciating it, I was too small, too much a sinner, to appreciate this great gift that He gave me.

He said “Noor, come on the 11th. of February 2003, and he sat a bit far from me …, he was dressed in white from head to toe, and he said “Repeat after me” and he said the shahada which I repeated after him.

Then I said “What did I say?” and he told me in English what I said, and I said “Then I’m a Muslim” and he said “Yes and your name is Maryam”.

I can’t say that I’m a good Muslim as it is extremely difficult. I lost all my catholic friends, all the friends that I talked with. My daughter thinks that I’m crazy! My son is the only one who believes that I may have found the truth and he is the only one at the moment who may become a Muslim.

I read everything in English because of my age, as I can’t remember the recitation so I use a book. And I ask Allah “Please remember Allah, the most Merciful and most Compassionate, that I’m really only a baby, but I’m a 65 years old baby and I have little difficulties and You must help me” and this is one of the ways He is helping me.