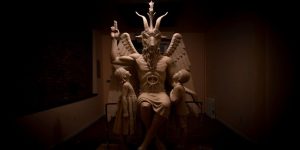 Satanism is a perverted faith that involves deviant and aberrant actions as a kind of adoration of the Satan.

Freedom is an essential human right that cannot be given or taken out as it is an inborn characteristic which God has given all of us equally. However, this human attribute, like everything around, is subject to moral criteria and standards which regulate the course of life and organize the interaction between the members of this existence. Unless these standards are observed, we will go in chaos and continue to pass by eccentric views and practices that contradict the innate nature and the unanimously agreed on values and morals.

One of the manifestations of the misuse of the right to freedom is the perverted faith of Satanism which a number of people continue to adopt and support. Satanism, in fact, is a perverted faith that involves deviant and aberrant actions as a kind of adoration of the Satan. The followers of Satanism perform specific rituals that involve clear anomalies and blatant aberrations that contradict the human nature, the moral values and the religious recommendations. Their perverted practices include illegal sex, consummation of drugs, killing and suicide, and other  abnormal and loathing perpetrations that cause disgust and arouse pity.

Satan, according to Islam, is the biggest enemy of Adam and his offspring since the creation of Adam. When Allah created Adam, He gave orders to the Angels to prostrate before Adam, an order which was refused to by Iblis (the grand Satan). He felt proud of himself and deemed himself far better than Adam and thus he should not do this expression of respect to Adam.

Iblis ignored the command of God and refused to prostrate to Adam, and therefore deserved the curse of God and the eternal torture of God in the hereafter. It was, at this point, when he decided to take Adam and his children as his bitter enemy and determined to consecrate his life for misguiding Adam and his progeny from the straight path of God.

The Qur’an relates to us this story in the following verses:

And [mention] when We said to the angels, “Prostrate to Adam,” and they prostrated, except Iblis (Satan); he refused. So We said, “O Adam, indeed this is an enemy to you and to your wife. Then let him not remove you from Paradise so you would suffer. Indeed, it is [promised] for you not to be hungry therein or be unclothed. And indeed, you will not be thirsty therein or be hot from the sun.” Then Satan whispered to him; he said, “O Adam, shall I direct you to the tree of eternity and possession that will not deteriorate?” And Adam and his wife ate of it, and their private parts became apparent to them, and they began to fasten over themselves from the leaves of Paradise. And Adam disobeyed his Lord and erred. Then his Lord chose him and turned to him in forgiveness and guided [him]. (Ta-Ha 20:116-122)

[Iblis] said, “My Lord, because You have put me in error, I will surely make [disobedience] attractive to them on earth, and I will mislead them all. (Al-Hijr 15:42)

In his conflict with Adam, Satan makes use of every useful means and utilizes the weak spots of people to reach his goal, namely the disbelief in God and the deprivation of His Mercy as in his case. He conceals vehement hatred against the humans who were honored by God, received His revelation on the earth and won His Mercy. The Satanists are some misguided people who submitted and obeyed Satan and took him as a a god other than Allah, although the Satan is center of evil in the whole being.

In fact, this worship of Satan is not a struggle or war between God and Satan. This is illogical and unacceptable. Satan is nothing but a poor and weak creature who moves under the rules set by God for everyone and everything in the universe. He does not possess supernatural powers or control anything around.

All about Satan is that he is a cursed devil whose job is deluding people and leading them away from the straight path of God. So, Satanism is not a conflict between God and Satan because Satan himself declared the Lordship of Allah in many places as stated by the Qur’an. He is just a poor creation, not better than humans or anything else. Even, the Prophets, the pious ones, scholars, the angels, etc. are far stronger than Satan and his soldiers and followers. It is really a war but between man and Satan. Almighty Allah says,

He (Iblis) said, “My Lord, then reprieve me until the Day they are resurrected.” .. [Iblis] said, “My Lord, because You have put me in error, I will surely make [disobedience] attractive to them on earth, and I will mislead them all. (Al-Hijr 15:36 and 39)

Satanists have been a victim of some perverted views that controlled their understanding and influenced their attitudes. They traced the deluded way of Satan, trusted him and followed his inspirations that have no relation to the right. Their false faith compelled them to commit the most abominable acts in order to please the Satan, who does not have anything to give them except delusion and misery. Those persons are generally suffering from psychological problems and personal perversions which affect their decisions and divert their practices.

The rituals of Satanism involve the most reprehensible actions as an expression of the refusal of the divine commands and to please the wretched Satan. Their practices include irregular sex, killing people and animals, drinking the blood of their victims, mocking the rituals of other religions, tearing apart the divine books such as the Qur’an and the Gospels, defiling them and dancing over them, reciting chants of glorification and appealing to Satan, practicing all kinds of abnormal sex such as incest and bestiality, playing heavy metal music and screaming loudly and hysterically, killing animals such as dogs, cats and roosters, committing suicide and choosing a victim to slaughter at the legs of the statues of the Satan, and perpetrating whatever their desires ask with no limit or bound.

In fact, all the practices of the Satanists reflect weak personalities, deficient characters, ill desires, perverted inclinations and irregular feelings. Nevertheless, all about Satanism is that it is a deviated faith with which Satan has misguided some abnormal persons who have irregular inclinations and ill desires to catch them to his way. They are some deviated persons who choose to forsake the virtuous, upright and righteous way of God to join the perverted way of Satan, who is in fact their biggest enemy.

Instead of combating their enemy and making use of the possible means to fortify themselves against him, they submitted themselves to his desire and took him as their biggest ally. They maintain frail evidence and statements supporting their misguided path and justifying their irregular choices and attitudes.

The perfect solution for this case is resorting willfully to the will of God the Creator and adopting the teachings of Islam that agree with logic, soul and pure nature. Following the Qur’an, the commands of Prophet Muhammad (peace be upon him) and leaving away all the insinuations and falsities of the Satan are the key factors for getting rid of these absurdities. Islam is a comprehensive religion that meets the various needs of people and makes balance between their spiritual and physical needs equally. Islam connects people with their Creator, the Most Powerful, and the Controller of the whole being.