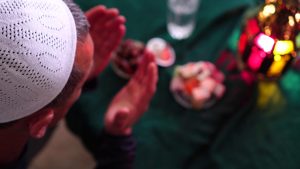 The month of Ramadan is openly calling us to repent to Allah.

The Prophet (peace be upon him) said in a number of authentic narrations, “Whoever fasts this month of Ramadan with faith in Allah and hope in Allah’s forgiveness, his previous sins will be forgiven”. (Al-Bukhari)

The Prophet also said in the hadith (narration of the Prophet’s words or actions): “Whoever stands and prays in these nights of Ramadan with faith and hope in Allah, Allah (Exalted is He) will forgive them.” (Al-Bukhari)

We take one important lesson quickly from this month, the lesson that we are not asked to be utopian. This is the danger as I alluded to earlier, coming out of a colonial-religious understanding where a massive inferiority complex was ingrained in us, which we still have, we cannot deal with the drama in our community.

Instead of dealing with the problems of our communities, we push them under the rug. For example, I have had parents that come to me with their kids and they say, ‘Brother Suhaib, please don’t put this in the newsletter on Friday’. What do you think I’d put it in the newsletter?

We’re hyper-paranoid of people finding out that we make mistakes because we think that those mistakes mean that Islam is mistaken, and this is a massive error. We are not secure enough to deal with our own drama. We are not secure enough to battle with our own demons because we’re scared, because of an inferiority complex, and because our understanding of religion has been changed to utopianism.

But Allah says, “Wa la yadurallaha shay’a” (nothing can hurt Allah). And the hadith of the Prophet: “If the first of you and the last of you and the most righteous of you stood and asked Allah and He gave, you would not take anything from Him and if the worst of you also would not harm Allah in any way”. (Al-Bukhari)

As one person said to me, ‘When I come to the mosque, it is like I’m coming to the court of Judge Judy to be judged by the people and to be declared as evil’. But in the time of the Prophet, the word iman (faith) came from the meaning security and trust; that there is a trust with Allah, amantu billah (I believe in Allah).

Therefore, Allah used this word, not aqidah (Islamic creed), not tawheed (doctrine of Oneness of God), but iman. Iman in Allah that this security with Allah is as the Prophet mentioned in his definition to believe in Allah, His angels, and His books to the end.

To have secured means I can come to you with my mistakes and I trust that you will forgive me if I seek your forgiveness. That is why Allah says in the Qur’an that if you come back to Him,

You will find Allah the Forgiving, the Merciful. (An-Nisaa’ 4:64)

I notice this because every time someone comes and asks me a question, you know what the first thing they say to me is? ‘I’m sorry’. Why are you sorry? ‘I’m sorry I need to ask…’ Why would you be sorry? Have some self-confidence, brother. ‘I’m sorry brother . . .’ What are you sorry for, man? I got the same drama that you got akhi (brother). ‘I’m sorry…’ No, you’re not sorry, you are human!

One thing we take from the month of Ramadan is that Ramadan is a means of forgiveness. For what? For mistakes. So the Muslim community is going to make mistakes, as Allah says:

This use of the letter ‘waw’ means that at the same time that you’re upright, seek Allah’s forgiveness.

Because of the insecurity in our Muslim community, we find Muslims in clubs. People say, ‘I can’t believe a Muslim would do something like that’. Why not? I’m not saying go to the club but why not? They are human beings! ‘I can’t believe she lied about me. She wears hijab, that’s why I don’t wear hijab’. Why not? She’s a human being!

But that doesn’t hurt Islam at all; Islam is Islam and Muslims are Muslims. That’s why the first thing I tell a convert is ‘Don’t judge Islam by Muslims, judge Islam by itself’. And that’s why we have the famous statement by Sheikh Muhammad `Abdu. When he went to Europe he said, ‘I saw Muslims without Islam’, then he said about us, ‘I saw Islam without Muslims’. There is nothing wrong with acknowledging mistakes; the community has to gain this maturity in order to deal with the problems of the community.

He trusted the Prophet. Would a drunk come to me? No way. Would he come to one of the sheikhs (scholars, leaders) of the masjid? No way. They would not come because they are fearful of this retribution, fearful of their mother and father displayed in front of the community.

One sister said to me, if the people knew about my mistakes in this community, they would laugh at me and relish my mistakes. This is nifaq (hypocrisy). Allah mentions,

If something bad happens to you, O Muhammad, the munafiqin (hypocrites) are happy with it”. (Aal `Imran 3:120)

So we have to move beyond that self-righteous way of looking at things and get back to that good old-fashioned religion that Grandma use to talk about. Organic religion that understands people who make mistakes; where the community can be the crutches that carry the people through errors and mistakes that they make, not judges and self-righteous kings who think that they know everything. This is a disaster.

The month of Ramadan comes as a means of forgiveness for our sins that Allah knows we’re going to make because He knows us better than we know ourselves.

With that in mind, I implore this community to work towards establishing social services in this community. Battered women homes, abused children, drug addiction, sex addiction, and these things.

I’m not insulting Islam, Islam is Islam. We’re human beings. But because we’re insecure with who we are, we’re unable to tackle the difficulties of the community, thereby emphasizing our ability to really serve the prophetic message. Ask the young people here who have troubles. One young person comes to me every time and begs, ‘Please Suhaib, don’t talk about it on the minbar (pulpit).’So why should I talk about you on the minbar?’ ‘Don’t tell anyone, if my parents know, they’ll cut me into pieces.’ ‘Why would they cut you into pieces?’ That self-righteous set of ideas not only fell into the community but fell into the homes, and that’s why kids can’t talk to their parents anymore.

They are scared if they go to their mother and father with some drama then it’s on—celebrity death match, kids are going to get taken out. Instead, we should discipline them and we should teach them and we should guide them. This month of Ramadan was brought to us to come to Allah with our sins, repenting to him, admitting our sins, and He forgives us.

This is an extremely important message that we want to take from this month of Ramadan. Get away from the utopian vision that was a product of modernity and fascism and nationalism. We have self-righteous nationalism in this community where people can come with their problems and ask us for help. Even the women who committed zina (adultery) trusted the Prophet enough to go to him. And she knew the punishment but still she went to the Messenger of Allah and said, ‘I committed zina, O Messenger of Allah’.