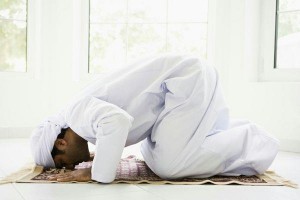 Prayer is nothing but submissiveness, humility, and supplication.

Prophet Muhammad (peace be upon him) said,

“Whenever a Muslim performs a prostration for God’s sake, God raises him one degree and absolves him of one offence.” (Muslim)

“The servant is never closer to God, Exalted is He, than when he is prostrating himself in worship.” (Muslim)

It is related that a man once said to God’s Messenger (peace be upon him): “Pray to God that He may include me among those who enjoy your intercession, and that He may grant me your companionship in Paradise.”

The Prophet (peace be upon him) replied: “Help me by making frequent prostration.” (Muslim)

This is the meaning of the words of God, Great and Glorious is He,

God also says in the Qur’an what means:

Their foreheads show the mark left by prostration. (Surat Al-Fath 48:29)

Some say this refers to the dust that sticks to the brow during the act of prostration, while others say it is the light of humility, shining forth from within. The latter view is more correct.

According to yet others, it is the radiance that will shine on their faces on the Day of Resurrection, as a result of their ablution.

The Prophet (peace be upon him) said,

If a human being prostrates himself at an appropriate point in his recitation of the Our’an, the devil withdraws, weeping as he says: “Alas! This man was bidden to prostrate himself and he has obeyed, so Paradise is his. I was also commanded to make prostration, but I disobeyed and so Hell is my lot. (Muslim)

“The servant is nearest to God, Great and Glorious is He, when he prostrates himself in Prayer, so that is the time to make many supplications.” (Muslim)

God, Exalted is He, said in the Qur’an what means

And perform the Prayer in remembrance of Me. (Surat Ta-Ha 20:14)

God, Great and Glorious is He, also said:

Do not approach the Prayer when you are intoxicated, until you know what you are saying(An-Nisaa’ 4:43)

Some say that “intoxicated” means inebriated by many anxieties, while others say it means drunk on the love of this world. According to some scholars, the meaning is obviously condemning worldly attachment, since the words “until you know what you are saying” explain the underlying reason.

Many are those who pray without having drunk wine, yet do not know what they are saying in their Prayers.

“If a man performs two cycles of Prayer without the distraction of any worldly thought, all his previous sins will be forgiven.” (Al-Bukhari)

The Prophet (peace be upon him) also said,

“Prayer is nothing but submissiveness, humility, supplication, sighing and remorse, holding out your hands and saying: “O God! O God!” Otherwise it is abortive.” ( At-Tirmidhi)

This advice was given to someone by the Prophet (peace be upon him): “When you pray, pray like a person who is saying farewell,” that is, saying farewell to himself, to his passions and to his life, before setting off on the journey to his Lord.

God, Exalted is He, says:

O Man, you labor towards your Lord laboriously, and you shall meet Him. (Al-Inshiqaq 84:6)

This article is excerpted from the Islamic Foundation translation of the author’s book, The Revival of Religious Sciences. Here taken from Onislam.net.

Abu Hamid Al-Ghazali (450-505 AH/1058-1111 AD) is one of the great jurists, theologians and mystics of the 12th Century. He wrote on a wide range of topics including jurisprudence, theology, mysticism and philosophy.