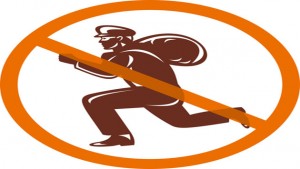 Indeed, all divine religions prohibit theft. We observe that the prohibition of theft is one of the Ten Commandments in the Torah. In the Old Testament, we read: “You shall not steal.” (Exodus 20:15)

In the Qur’an, Allah told Prophet Muhammad to instruct Muslims to refrain from theft among other things. We read the following verse in the Qur’an:

O Prophet, when the believing women come to you pledging to you that they will not associate anything with Allah, nor will they steal, nor will they commit unlawful sexual intercourse, nor will they kill their children, nor will they bring forth a slander they have invented between their arms and legs, nor will they disobey you in what is right – then accept their pledge and ask forgiveness for them of Allah. Indeed, Allah is Forgiving and Merciful. (Al-Mumtahanah 60:12)

Therefore, Prophet Muhammad would accept the pledge of allegiance provided that the new converts refrained from theft among other sins.

Ubada bin Al-Samit reports: “I gave the pledge of allegiance to the Prophet with a group of people, and he said, ‘I take your pledge that you will not worship anything besides Allah, will not steal, will not commit infanticide, will not slander others by forging false statements and spreading them, and will not disobey me in anything good. And whoever among you fulfills all these (obligations of the pledge), his reward is with Allah. And whoever commits any of the above crimes and receives his legal punishment in this world, that will be his expiation and purification. But if Allah screens his sin, it will be up to Allah, Who will either punish or forgive him according to His wish.’” (Al-Bukhari)