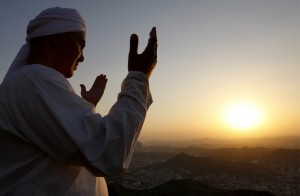 The important aspect of a believer’s faith is his or her relationship with God.

Islam signifies the subjection of all activities in all walks of life to the Law of God Almighty, and leaving nothing to the whims and fancies of anyone else. God has commanded the believers to declare:

This means that a Muslim is a person who has submitted his or her whole self and whole life to God, so that the first duty of a Muslim is to lead a life of obedience to God alone.

And the above quoted commandment also implies that it is wrong to consider our lives to consist of water-tight compartments, saying that “this is the part of my life within the bounds of religion where I am bound to obey God, and these are the secular areas of life where God’s laws are irrelevant.”

The twin sources of Islam — the Qur’an and the Sunnah — teach  that when God Almighty is accepted as the Creator, Sustainer, and Lawgiver, we cannot go after “other gods”.

Islam is a complete way of life that asks its followers to mold their entire lives in accordance with its principles laid down in the Qur’an and the Sunnah. This in fact is not an unrealistic idea; it only means a change of perspective or approach.

Of course, such a change is bound to have its impact on our life, both internal and external; but for those who wish to lead a good life here, Islam is the way.

The important point to note here is that Islam does not impose on its adherents rituals for the sake of rituals, as they are likely to be performed mechanically without understanding their meaning in life.

God says in the Qur’an, which Muslims believe is His word, what means:

It is not righteousness that you turn your faces towards East or West; but it is righteousness to believe in Allah and the Last Day, and the Angels, and the Book, and the Messengers; to spend of your substance, out of love for Him, for your kin, for orphans, for the needy, for the wayfarer, for those who ask, and for the ransom of slaves; to be steadfast in prayer, and give zakah (regular charity); to fulfill the contracts which you have made; and to be firm and patient in pain (or suffering) and adversity, and throughout all periods of panic. Such are the people of truth, the God-fearing. (Al-Baqarah 2:177)

That is to say, if our rituals do not have any impact on our day-to-day life, they are of little value. Similarly, if we do our daily duties that are considered to be outside the generally recognized borders of religious ritual with sincerity and faith expecting reward from God, they too become acts of worship.

Prophet Muhammad (peace and blessings of Allah be upon him) once told his Companions that they will be rewarded even for having sexual intercourse with their wives. The Companions were astonished. They asked: “How are we going to be rewarded for doing something we enjoy very much?”

The Prophet asked them: “Suppose you satisfy your desires illegally, don’t you think that you will be punished for that?”

They replied, “Yes”. “So” he said, “by satisfying it legally with your wives, you are rewarded for it.” (Muslim)

This all-inclusive approach to worship encourages people to purify and spiritualize their whole lives. But this is not to disparage ritualistic worship. In fact, rituals, if performed with a full understanding of their inner significance, equip the worshippers with a moral and spiritual power that help them to carry out their daily activities in the various spheres of life informed by the guidance of God.
Thus in Islam, the term “worship” (in Arabic, `ibadah) does not signify merely the “pillars of Islam” such as Prayer, fasting, charity or pilgrimage. It includes all the activities of a believer; in fact, it stands for everything a Muslim believes, says, or does. When believers perform all the activities of their lives seeking the pleasure of God, then all their deeds become worship. Naturally, this also includes the rituals they perform, such as prayer.

We can see that the worship of God as visualized in Islam — whether it is ritual or non-ritual — prevents evil thoughts and actions, thereby purifying life. Indeed, sincere Islamic worship trains the individual to lead a life of complete obedience and submission to God.

Of all the forms of ritual worship in Islam, Prayer (in Arabic, salah) is unique. It is typical of Islam and is entirely different from the usual kind of Prayer familiar in other religions.
The prostration in Prayer symbolizes the worshipper’s total and unconditional submission to God Almighty. Of course, certain supplications are recited in Prayer, following the Prophetic teaching.
But the objective of Prayer is not this-worldly. Muslims can pray to God for the solution of the immediate problems they confront any time, in any language. But they are not authorized to change the language of the utterances in Prayer, nor can they change its form or content. Muslims have to strictly adhere to its form as taught to by Prophet Muhammad (peace be upon him).
Muslims believe that God has made Prayer compulsory for all His prophets as well as their followers, as it is evident from the Qur’an. To Moses, God said what means,

Verily I am Allah: There is no god but Me: so worship Me only and establish regular prayer for My remembrance( Ta-Ha 20:14)

The important aspect of a believer’s faith is his or her relationship with God; and nowhere is this relationship exemplified as in Prayer. Prayer lifts a person spiritually towards his or her Creator and if it is done with devotion and sincerity, his or her heart will be filled with the love of God and the hope of Paradise.
Praying five times a day helps Muslims to constantly remember God and seek His forgiveness and pleasure. Besides, it offers an occasion for repentance, so that they earnestly ask Allah for forgiveness of the sins they committed. Prophet Muhammad said: “Imagine a stream outside a person’s door and imagine that he bathes in it five times a day; do you think he would have any dirt on him?” The people said, “Not at all.” The Prophet then said, “The five daily prayers are like that: Allah wipes away the sins by them.” (Al-Bukhari)
The most important aspect of a person’s relationship with God, is his or her strong faith and sincerity. This relationship with God is clearly borne out and strengthened by Prayer. If the Prayer is performed with true devotion to God and with a sincere heart, it will have a lasting effect on the person.
God says in the Qur’an what means:

Establish regular prayer: for prayer restrains from shameful and evil deeds; and remembrance of Allah is the greatest (thing in life) without doubt. And Allah knows the (deeds) that you dd. (Al-`Ankabut 29:45)

Certainly a person’s God-consciousness awakened by Prayer strengthens him or her against temptations arising from the weakness of the flesh.
Again God says in the Qur’an what means:

Truly man was created very impatient; fretful, when evil touches him; and niggardly, when good reaches him; not so those devoted to Prayer and those who remain steadfast to their prayer(Al-Ma`arij 70:19-23)

Thus, it is the Prayer that enables believers to keep in constant touch with their Creator and to keep steady in the face of the temptations and the pressures life.

Taken with slight modifications from Onislam.net.