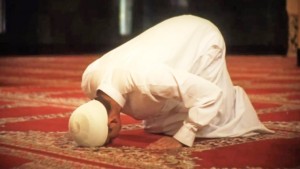 Prayer washes one’s soul as much as it washes out one’s sins.

As one wanders through the walks of his life, one is mostly occupied with the overlapping aspects of life, such as work, family, education, children, etc. No doubt that this generally involves some problems, worries, or anxieties. One feels that he is in a pressing need to some occasional spiritual intervals to unburden these worries, help him get  rid of his anxieties and relieve and revive his soul. Moreover, one lacks a helping hand to overcome such things beyond his capacities and reassure him about the unknown future which he hopes to be promising. As a Muslim, you are lucky!!

Find your rest in the prayer.

The Prophet (peace be upon him) would say to Bilal, “O Bilal, proclaim iqamah (call for starting prayer): give us comfort by it.” Abu Dawud

The Prophet’s concerns about the whole ummah (Muslim nation), the burdens of his message and the occupations of his mission will be alleviated once he stood in prayer. Prayer is a worldly link between man and his Lord, the Creator and the One who manages the whole universe. He holds absolute control upon everything and none of the whole being sets out without His permission. When one stands before Him, with complete and unshaken faith and trust in His Omnipotence, Mercifulness, Graciousness and Kindness, one can satisfactorily lay his burdens and leave his concerns, and He will surely help him.

Prayer was the joy of the Prophet’s eye and the source of his relief and happiness. It was narrated that Anas said: “The Messenger of Allah (peace be upon him) said: ‘Women and perfume have been made dear to me, but my comfort has been provided in prayer.’” (An-Nasa’i) He loved prayer as he attained his comfort, healing, and relief in it. For this reason, abundant reports show that the Prophet (peace be upon him) would stand in prayer for very long hours reciting the Qur’an and contemplating on its precious meanings. Al-Mughira ibn Shu`ba narrated: “The Prophet (peace be upon him) used to pray so much that his feet used to become edematous or swollen, and when he was asked as to why he prays so much, he would say, “Shall I not be a thankful slave (to Allah)?” (Al-Bukhari)

Also, Hudhaifah (may Allah be pleased with him) reported: “I performed Prayer with the Prophet (peace be upon him) one night, and he started reciting Surat Al-Baqarah. I thought that he would go in ruku` (bowing posture in prayer) at the end of one hundred verse, but he continued (reciting); and I thought that he would perhaps recite (this Surah) in the whole rak`ah (prayer), but he continued the recitation; I thought he would perhaps bow on completing (this Surah). He (peace be upon him) then started reciting Surat An-Nisaa’ which he followed with Surat Aal-`Imran. He recited leisurely. When he recited a verse which mentioned the tasbih, he would say Subhan Allah and when he recited the verse which tells how God is to be asked, the Messenger of Allah (peace be upon him) would then ask from Him; and when he (peace be upon him) recited a verse asking one to seek protection of Allah, he would seek protection of Allah. Then he bowed and said, “Subhana Rabbiyal-Azhim (My God the Great is free from imperfection)”; his bowing lasted about the same length of time as his standing, (and then on returning to the standing posture after ruku`) he would say, “Sami` Allahu liman hamidah, Rabbana lakal-hamd (Allah listens to him who praises Him. Praise be to You, Our Lord!),” and he would then stand about the same length of time as he had spent in bowing. He would then prostrate himself and say, “Subhana Rabbiyal-A`la (My God the Supreme is free from imperfection),” and his prostration lasted nearly the same length of time as his standing (qiyam). (Muslim)

Prayer washes one’s soul as much as it washes out one’s sins. Abu Hurairah (may Allah be pleased with him) reported: I heard the Messenger of Allah (peace be upon him) saying, ” “Do you think that if there was a river by the door of any one of you, and he bathed in it five times each day, would there be any trace of dirt left on him?” They said: “No trace of dirt would be left on him.” He said: “That is the likeness of the five daily prayers; by means of them Allah erases sins.” (Al-Bukhari and Muslim)

Almighty Allah has strictly commanded the Muslims to observe prayer and praised those who perform it in its due times. He (Glory be to Him) says,

Guard strictly the prayers especially the middle Prayer (i.e. the ‘Asr “Afternoon Prayer”). And stand before Allah with obedience. (Al-Baqarah 2:238)

And those who strictly guard their prayers (at their fixed stated hours). These are indeed the inheritors. Who shall inherit the Firdaus (Paradise). They shall dwell therein forever. (Al-Mu’minun 23:9-11)

`Ubadah ibn As-Samit said: I bear witness that I heard the Messenger of Allah (peace be upon him) say: “Allah, the Exalted, has made five prayers obligatory. If anyone performs ablution for them well, offers them at their (right) time, and observes perfectly their bowing and submissiveness in them, it is the guarantee of Allah that He will pardon him; if anyone does not do so, there is no guarantee for him on the part of Allah; He may pardon him if He wills, and punish him if He wills.” (Abu Dawud)

Then, the Qur’an finally teaches that the one who performs prayer perfectly, observing its due rights, offering its pillars and actions correctly and perfectly and joins the congregational prayer will surely have his behavior rectified and amended. Prayer will leave a pleasant and positive impact on his character and set aright his conduct. It will protect the Muslim against the insinuations of Satan and the seduction of evil desires. As Almighty Allah says,

This indeed is the good result of prayer when it touches the heart of the praying person and when it is offered with submission and reverence. It safeguards the person and community against evil deeds and immoralities and saves the person from the misguided ways of Satan.