Almighty Allah has sent down revelation to Prophet Muhammad (peace be upon him) commissioning him with the last divine message to disseminate it among people. The first article of the Islamic faith that Prophet Muhammad called people for was monotheism; the worship of Allah, the only true God Alone. Not only Prophet Muhammad but all the Prophets of God commenced their mission with the same article of faith. Allah says in the Qur’an, 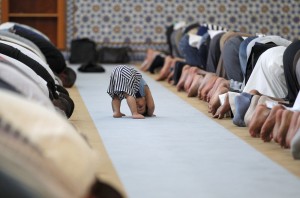 The first worship enjoined upon the Prophet and his followers was Prayer which became the fundamental worship of Islam thereafter.

And We sent not before you any messenger except that We revealed to him that, “There is no deity except Me, so worship Me.” (Al-Anbiya’ 21:25)

He sends down the angels, with the inspiration of His command, upon whom He wills of His servants, [telling them], “Warn that there is no deity except Me; so fear Me.” (An-Nahl 16:2)

The first worship enjoined upon the Prophet (peace be upon him) and his followers was salah or Prayer which became the fundamental worship of Islam thereafter. Prayer occupied a topping position among the whole Islamic rituals, although some of them may look heavier or harder than Prayer. The hadith of Ibn `Umar has placed prayer on the forefront of the Islamic pillars, next to monotheism.  The Messenger of Allah (peace be upon him) said: “Islam is based on five (principles):

We can glimpse the advance of prayer upon other acts of worship in the following:

Prayer is the first enjoined worship

With the exception of all acts of worship, Prayer has been enacted in the heavens, in the seventh heaven. This obligation took place during the blessed Journey of Al-Israa’ and Al-Mi`raj in which Almighty Allah has raised His Prophet Muhammad to heavens and met him. In his Sunan, Imam An-Nasa’i reported from Anas ibn Malik that the Messenger of Allah (peace be upon him) said: “I was taken up to the first heaven, where I saw Adam (peace be upon him). Then I was taken up to the second heaven… Then I was taken up to the seventh heaven where I saw Ibrahim (peace be upon him). Then I was taken up above seven heavens and we came to Sidrat Al-Muntaha and I was covered with fog. I fell down prostrate and it was said to me: ‘(Indeed) The day I created the heavens and the earth, I enjoined upon you and your Ummah fifty prayers, so establish them, you and your Ummah.’ I came back to Ibrahim and he did not ask me about anything, then I came to Musa and he said: ‘How much did your Lord enjoin upon you and your Ummah?’ I said: ‘Fifty prayers.’ He said: ‘You will not be able to establish them, neither you nor your Ummah. Go back to your Lord and ask Him to reduce it.’ The Prophet (peace be upon him) remained going between Moses and God until the times of prayer were decreased to 5 times daily.

This incident took place years before the migration of the Prophet (peace be upon him) from Makkah to Al-Madinah. However, all of Zakah, fasting, Jihad, Hajj, etc. were obligated after the Prophet’s migration to Al-Madinah and without ascension to the heavens.

Prayer is the first questioned deed after death

Abu Hurairah (may Allah be pleased with him) reported: “The Messenger of Allah (peace be upon him) said, “The first of man’s deeds for which he will be called to account on the Day of Resurrection will be Prayer. If it is found to be perfect, he will be safe and successful; but if it is incomplete, he will be unfortunate and a loser. (At- Tirmidhi)

Prayer ranks next to monotheism

Narrated Ibn `Abbas: “When Allah’s Messenger (peace be upon him) sent Mu`adh to Yemen, he said (to him), “You are going to people of a (Divine) Book. First of all invite them to worship Allah (alone) and when they come to know Allah, inform them that Allah has enjoined on them, five prayers in every day and night; and if they start offering these prayers, inform them that Allah has enjoined on them, the Zakah. And it is to be taken from the rich amongst them and given to the poor amongst them; and if they obey you in that, take Zakat from them and avoid (don’t take) the best property of the people as Zakat.” (Al-Bukhari)

Prayer is the mainstay of Islam

Mu`adh ibn Jabal narrated that the Prophet (peace be upon him) said, “The head of the matter is Islam, its pillar is the prayer and its peak is jihad.” (At-Tirmidhi)

Prayer is an inexcusable obligation

While most of the actions are contingent on the fulfillment of specific requirements such as the possession of the required amount of properties for Zakah, the physical ability in case of fasting, the material and physical affordability for Hajj, prayer is strikingly required and is absolutely unexcused. If a person does not have the due amount of properties, he is not asked for Zakah; if he is travelling or sick, he is allowed to break his fast; and if he is poor, he is not required to go for Hajj. However, for prayer, the poor, rich, sick, traveler, etc. all are commanded with it. The Qur’an and Sunnah of the Prophet showed us how the traveler, the sick, or even the warriors at the battlefield can offer prayer. The Qur’an describes the way to perform prayer while in the battlefield as follows,

And when you are among them and lead them in prayer, let a group of them stand [in prayer] with you and let them carry their arms. And when they have prostrated, let them be [in position] behind you and have the other group come forward which has not [yet] prayed and let them pray with you, taking precaution and carrying their arms. Those who disbelieve wish that you would neglect your weapons and your baggage so they could come down upon you in one [single] attack. But there is no blame upon you, if you are troubled by rain or are ill, for putting down your arms, but take precaution. Indeed, Allah has prepared for the disbelievers a humiliating punishment. (An-Nisaa’ 4:102)

Prayer is a common worship in all religions

Almighty Allah related to us that all the Prophets (peace be upon them) would perform prayer as well. God the Almighty says,

And We delivered him (Abraham) and Lot to the land which We had blessed for the worlds. And We gave him Isaac and Jacob in addition, and all [of them] We made righteous. And We made them leaders guiding by Our command. And We inspired to them the doing of good deeds, establishment of prayer, and giving of zakah; and they were worshippers of Us. (Al-Anbiyaa’ 21:71-73)

Prayer is a daily worship

While most of the acts of worship have specific times for their performance, such as fasting in Ramadan, Zakah, Hajj in Dhul-Hajjah, etc. prayer is to be offered on a daily basis. Abu Hurairah (may Allah be pleased with him) reported: “I heard the Messenger of Allah (peace be upon him) saying, “Say, if there were a river at the door of one of you in which he takes a bath five times a day, would any soiling remain on him?” They replied, “No soiling would left on him.” He (peace be upon him) said, “That is the five (obligatory) Salah (prayers). Allah obliterates all sins as a result of performing them.” (Al-Bukhari and Muslim)