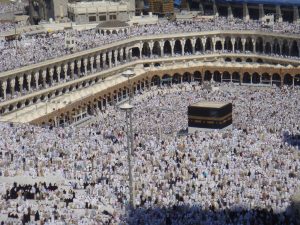 Pilgrims return home enriched by this more pluralistic and holistic outlook and with a new appreciation for their own origins.

Pilgrimage and Its Universal Lessons

Millions of pilgrims from all over the world will be converging on Makkah in the coming days. They will retrace the footsteps of millions who have made the spiritual journey to the valley of Makkah since the time of Adam.

Hajj literally means, “to continuously strive to reach one’s goal.” It is the last of the five pillars of Islam (the others include a declaration of faith in one God, five daily prayers, offering regular charity, and fasting during the month of Ramadan). Pilgrimage is a once-in-a-lifetime obligation for those who have the physical and financial ability to undertake the journey.

The Hajj is essentially a re-enactment of the rituals of the great prophets and teachers of faith. Pilgrims symbolically relive the experience of exile and atonement undergone by Adam and Eve after they were expelled from Heaven, wandered the earth, met again and sought forgiveness in the valley of Makkah. They also retrace the frantic footsteps of the wife of Abraham, Hagar, as she ran between the hills of Safa and Marwa searching for water for her thirsty baby (which according to Muslim tradition, God answered with the well of Zam Zam). Lastly, the pilgrims also commemorate the willingness of Abraham to sacrifice his son for the sake of God. God later substituted a ram in place of his son.

Yet, the Hajj is more than these elaborate rituals. The faithful hope that it will bring about a deep spiritual transformation, one that will make him or her a better person. If such a change within does not occur, then the Hajj was merely a physical and material exercise devoid of any spiritual significance.

As all great religions teach, we are more than mere physical creatures in that we possess an essence beyond the material world. Indeed, this is why all great religions have a tradition of pilgrimage. In the Islamic tradition, Hajj encapsulates this spiritual journey toward this essence. The current state of affairs — both within and outside the Muslim world — greatly increases the relevance of some of the spiritual and universal messages inherent in the Hajj.

As Islamic scholar Ebrahim Moosa asks rhetorically: “after paying homage to the two women Eve and Hagar in the rites of pilgrimage, how can some Muslims still violate the rights and dignity of women in the name of Islam? Is this not a contradiction?”

Indeed, the Qur’an teaches: “I shall not lose sight of the labor of any of you who labors in my way, be it man or woman; each of you is equal to the other.” (Aal `Imran: 195)

Clearly, the white sea of men and women side by side performing tawaf (circling) around the Ka`bah (the stone building Muslims believe was originally built by Adam and rebuilt by Abraham and his son Ishmael) should lay to rest any claim that Islam — as opposed to some Muslims — degrades women. The fact that millions of Muslims transcending geographical, linguistic, level of practice, cultural, ethnic, color, economic and social barriers converge in unison on Makkah, attests to the universality of the Hajj. It plants the seed to celebrate the diversity of our common humanity. Pilgrims return home enriched by this more pluralistic and holistic outlook and with a new appreciation for their own origins. One of the most celebrated Western Hajjis (one who has completed the Hajj) is none other than African-American civil rights leader El-Hajj Malik El-Shabbaz, more commonly known as Malcolm X. The man profoundly reassessed his previous views during the Hajj. This transformation, of course, sealed his break with the Black Nationalist Movement of the Nation of Islam.

Contrary to the teachings of the Nation, he concluded that Islam encompassed all of humanity and transcended race and culture. Malcolm X later said, “In my 39 years on this Earth, the holy city of Makkah had been the first time I had ever stood before the Creator of all and felt like a complete human.”

In Makkah, he discovered himself mixing with, “fellow Muslims, whose eyes were the bluest of blue, whose hair was the blondest of blond, and whose skin was whitest of white.” Malcolm X was so inspired by what he witnessed, that, in letters to friends and relatives, he wrote, “America needs to understand Islam because this is the one religion that erases from its society the race problem.”

Upon returning to America, he embarked on a mission to enlighten both blacks and whites with his new views. Malcolm X understood that in order to truly learn from the Hajj, its inherent spiritual lessons must extend beyond the fraternal ties of Muslims to forging a common humanity with others.

In fact, as part of the spiritual experience, the pilgrimage links people across religions through a past shared by several Abrahamic traditions. This combined with the Islamic teaching of the common origin of humanity holds out much hope. Indeed, the Qur’an teaches: “We created you from a single pair of a male and female (Adam and Eve), and made you into nations and tribes that ye may know each other and not that you might despise each other. The most honored of you in the sight of God is the most righteous of you” (Al-Hujurat: 13). This is a great celebration of the differences and at the same time unity of all of humanity.

Another essential spiritual message of the Hajj is one of humility to God and His supremacy and control over all that we know. The multitude of people and their inner beliefs and practices are all to be judged by God and God alone in His infinite wisdom and full knowledge. Indeed, as the Qur’an insists, “Let there be no compulsion in matters of faith, truth stands out clear from error.” (Al-Baqarah: 256) The result of a successful Hajj is a rich inner peace, which is manifested outwardly in the values of justice, honesty, respect, generosity, kindness, forgiveness, mercy and empathy. And it is these values – all attributes of God almighty — that are indispensable to us all if we are just to get along in this world.

Faisal Kutty is a lawyer and writer. He is an adjunct professor of comparative law at Osgoode Hall Law School of York University. He is also a past vice chair of the Canadian Council on American Islamic Relations. His articles are archived at www.faisalkutty.com.