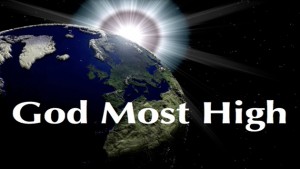 The Most High in Islam

In the Qur’an, God (called “Allah” in Arabic) is often described as “the Most High”. We read:

So I have warned you of a Fire which is blazing. None will [enter to] burn therein except the most wretched one, Who had denied and turned away. But the righteous one will avoid it – [He] who gives [from] his wealth to purify himself. And not [giving] for anyone who has [done him] a favor to be rewarded But only seeking the countenance of his Lord, Most High. (Al-Layl 92:4-20)

In the Qur’an, God is also called “the High”. We read:

His Kursi (throne) extends over the heavens and the earth, and their preservation tires Him not. And He is the High, the Most Great. (Al-Baqarah 2:255)

Thus does Allah, the Mighty, the Wise, reveal to you, and (thus He revealed) to those before you. His is what is in the heavens and what is in the earth, and He is the High, the Great. (Ash-Shura 42:3-4)

The Most High in Christianity

In the Bible, God, the Creator, is often described as “the Most High”. For example, in the New Testament, we read: “But it was Solomon who built a house for Him. However, the Most High does not dwell in houses and temples made with hands; as the prophet says, Heaven [is] My throne, and earth the footstool for My feet. What [kind of] house can you build for Me, says the Lord, or what is the place in which I can rest? Was it not My hand that made all these things?” (Acts 7:47-50)

Is Jesus the “Most High” or “Son of the Most High”?

We observe that Jesus is sometimes described in the Bible as “the son of the Most High”. we read: “And listen! You will become pregnant and will give birth to a Son, and you shall call His name Jesus. He will be great (eminent) and will be called the Son of the Most High; and the Lord God will give to Him the throne of His forefather David.” (Luke 1:31-32)

Jesus’ description as “the son of the Most High” is a metaphorical rather than literal one. It cannot be understood as a literal one simply because this description is given to other people.

For example, the Bible quotes Jesus as saying: “Instead, love your enemies, do good, and lend expecting nothing in return. If you do, you will have a great reward. You will be acting the way children of the Most High act, for he is kind to ungrateful and wicked people.” (Luke 6:35)

The above verse confirms that the description of “the son of the Most High” may be given to Jesus and other people which prove that his sonhood of God is a metaphorical rather than literal one.