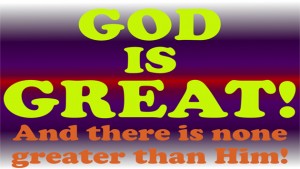 Since Jesus is the servant and messenger of God and God is greater than him, Jesus cannot be God

One of the names and attributes of God is “the Most Great”. The Lord of this universe should be “the Most Great”, Who is greater than everything in existence. If there is something to be described as “great” in this universe, the Deity should be, of course, greater, simply because He is the Creator of any such great thing and everything. It goes without saying that the Creator is greater than a creature.

The Most Great in Islam

In the Qur’an, God (called “Allah” in Arabic) is described as “the Most Great”. For example, we read:

Thus does Allah, the Mighty, the Wise, reveal to you, and (thus He revealed) to those before you. His is what is in the heavens and what is in the earth, and He is the Most High, the Most Great. (Ash-Shura 42:3-4)

His Kursi (throne) extends over the heavens and the earth, and their preservation tires Him not. And He is the Most High, the Most Great. (Al-Baqarah 2:255)

But as for he who is given his record in his left hand, he will say, “Oh, I wish I had not been given my record…Indeed, he did not used to believe in Allah , the Most Great (Al-Haqqah 69:25-33)

In the Prophetic tradition, God’s description as “the Most Great” was included in the two statements which are heavy in the Scales and dear to God. Abu Huraira (may Allah be pleased with him) reported: the Messenger of God (peace be upon him) said, “There are two statements that are light for the tongue to make, heavy in the Scales and are dear to the Merciful: subhan-allahi wa bihamdihi, subhan-allahil-azhim [Glory be to Allah and His is praise, (and) Glory be to Allah, the Most Great].” (Al-Bukhari)

Also, in a qudsi (divine) hadith, Prophet Muhammad quoted God as confirming that greatness and pride belong only to Him alone. God was quoted as saying: “Pride is My cloak and greatness is My garment, so I inflict my torture on whoever competes with Me regarding these two and I will not care.” (Ahmad, Abu Dawud, Ibn Majah and Ibn `Abbas)

The Most Great in Christianity

In the New Testament, the Bible tells us that God is the Most Great Who is greater than everything. We read: “My sheep listen to my voice. I know them and they follow me. I give them eternal life. They will never die, and no one will snatch them from my hand. My Father, who has given them to me, is greater than all, and no one is able to snatch them from my Father’s hand. I and the Father are one.” (John 10:27-30)

In the Bible, Jesus indicated that God (called “Father” in Christianity) is greater than him. We read: “You have heard me tell you, ‘I’m going away and returning to you.’ If you loved me, you would be happy that I am going to the Father, because the Father is greater than me.” (John 14:28)

In more than one position, the New Testament mentions that Jesus is God’s servant and messenger. About Jesus’ servitude of God, we read: “The God of Abraham, Isaac, and Jacob—the God of our ancestors—has glorified his servant Jesus. This is the one you handed over and denied in Pilate’s presence, even though he had already decided to release him.” (Acts 3:13)

About sending Jesus to people as a messenger of God, we read: “And so, dear brothers and sisters who belong to God and are partners with those called to heaven, think carefully about this Jesus whom we declare to be God’s messenger and High Priest. For he was faithful to God, who appointed him, just as Moses served faithfully when he was entrusted with God’s entire house.” (Hebrews 3:1-2)