The names and attributes of God include “the First” and “the Last”. The Lord and Creator of this universe should be the First and Last One to exist. There can be none either before or after Him. Even, there can be none that is first or last with Him. 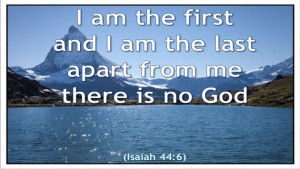 The First and the Last in Islam

In the Qur’an, God (called “Allah” in Arabic) is described as “the First” and “the Last”. We read:

And do not invoke with Allah another deity. There is no deity except Him. Everything will be destroyed except His Face. His is the judgement, and to Him you will be returned. (Al-Qasas 88:28)

Everyone upon the earth will perish, and there will remain the Face of your Lord, Owner of Majesty and Honor. (Ar-Rahman 55:26-27)

Imran ibn Husain reported that Prophet Muhammad (peace be upon him) said: “God existed and nothing else existed. His throne was on water. Then, He created heavens and earth and wrote everything in the Qur’an.” (Al-Bukhari)

The First and the Last in Christianity

In the Old Testament, God is described as “the First” and “the Last”. We read: “For the Lord, the King of Israel and his Redeemer, the Lord of hosts says this, ‘I am the First and I am the Last; and there is no God besides Me.’” (Isaiah 44:6)

We also read: “Listen to Me, O Jacob, and Israel, whom I called; I am He, I am the First, I am the Last. My hand founded and established the earth, and My right hand spread out the heavens; When I call to them, they stand together [in obedience to carry out My decrees].” (Isaiah 48:12-13)

As for Jesus, he is described as “the firstborn of all creation” in the Bible. In the New Testament, we read: “Giving thanks unto the Father, who made us meet to be partakers of the inheritance of the saints in light; who delivered us out of the power of darkness, and translated us into the kingdom of the Son of his love; in whom we have our redemption, the forgiveness of our sins: who is the image of the invisible God, the firstborn of all creation.” (Colossians 1:12-15)

As a matter of fact, Jesus was not the beginning of creation simply because the Old Testament mentions that there was no man before the creation of Adam. We read: “These are the generations of the heavens and of the earth when they were created, in the day that the Lord God made the earth and the heavens, and before every plant of the field was in the earth, and before every herb of the field grew; for the Lord God had not caused it to rain upon the earth, and there was not a man to till the ground. But there went up a mist from the earth, and watered the whole face of the ground. And the Lord God formed man of the dust of the ground, and breathed into his nostrils the breath of life; and man became a living soul.” (Genesis 2:4-7)

Where was Jesus upon the creation of Adam? How did he exist though his mother has not been created yet? If he preexisted his mother, why was his mother created though Jesus existed before and without her?