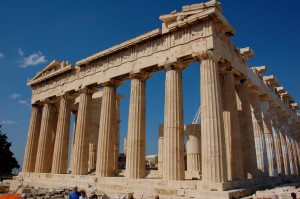 The claim that Muslims did not respect the ancient civilizations is a false and unjust allegation.

The claim that Muslims did not respect the ancient civilizations is a false and unjust allegation. In fact, they benefited from the positive aspects of these civilizations and they translated many Greek, Persian and Indian books into Arabic, solemnly believing that human heritage includes the skills, the experience and the learning of different nations all of which should be employed for the benefit of mankind. One should seek to acquire knowledge even in a land that does not believe in one’s faith and even if it were at the other end of the world.

The Muslim philosopher Ibn Rushd (Averroes) explained the Muslim’s attitude concerning the ancient civilization in the following passage. He said, “The religion of Islam urges us to read the books of the civilizations that preceded us provided that their aim was to guide people to the truth which our faith urges us to follow. This includes the use of our powers of comprehension and reasoning in studying all created beings.” Ibn Rushd then added: “We must study and understand what they wrote in their books. It is then up to us to accept what is consistent with our beliefs to be grateful to them. However, whatever is not consistent with our beliefs should not confuse us, but we should reject it, warn others about it and not blame them in any way.” (The Philosophy of Ibn Rushd)

It is a historical fact the Muslims did not set fire to the Library of Alexandria. This unjust and unfounded accusation has been ascribed to the Muslims by the enemies of Islam who spread this rumor, which was confirmed in peoples’ minds as if it were an established fact. This false accusation was spread during the thirteenth century A.D. as a result of the aggressive attitude of the Crusaders, and it is still repeated up to this very day in spite of the authentic proof of objective historians who have refuted it.

The origin of this false allegation goes back to `Umar ibn al-Khattab, the second Muslim Caliph, who was falsely accused of having given the order to set fire to the Library. He was also falsely accused of having said that if the books in the library contained what was written in the Qur’an, then they were useless and if these books contained any contradiction to what was written in the Qur’an, then they must be destroyed. It has been proved beyond a shadow of doubt that `Umar never made such a statement. Another accusation which is equally false and unjust is that the Muslim Arabs used books in the library as fuel for the public baths for six whole months.

Sigrid Hunke presented documentary evidence in her books: “Allah is completely different”, proving that the Arabs entered Alexandria in the year 642 A.D. and that there had been no library in Egypt then, since the library had been burned and destroyed centuries before that date. She also added that there were no public baths in Egypt during that era. Sigrid Hunke stated that the old library annexed to the academy founded by Ptolemy the First (Soter) about the year 300 B.C. was burned in the year 47 B.C. when Julius Caesar besieged the city. The library was later rebuilt by Cleopatra who furnished it with books from Bergamun.

The third century A.D witnessed the beginning of the organized destruction of the Library of Alexandria. Emperor Caracal suspended the Academy, and religious fundamentalists set fire to the library, which they considered to be a manifestation of Paganism. In the year 391 A.D. Patriarch Theophilos obtained the permission of Emperor Theodosios to destroy what remained of the Academy and to set fire to the annexed library which at that time, contained three hundred thousand scrolls, in order to found a church and a monastery in its place. Destruction of the library was resumed in the fifth century A.D. during the attack launched upon the Pagan men of learning and scholars and their places of worship in addition to the destruction of their library.(1)

The aforementioned facts prove that the allegations concerning setting fire to the library of Alexandria were spread in order to distort the image of Islam so that the Muslims would appear to be the enemies of learning and civilization, when in fact they were completely innocent of the crime they had been accused of.(2)

Source: Taken from the book entitled “Islamic Facts” prepared by a number of scholars and printed by the Egyptian Ministry of Awkaf.