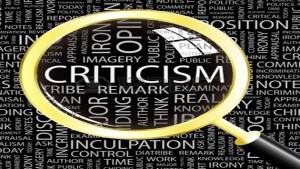 Muslims do not have any objection to having their merits and faults judged in an intelligible (or articulate) way.

It is widely believed that Muslims don’t accept criticism. Some people even believe that such aversion to criticism may be inspired by Islam which is deemed a one-way religion which is too intolerant to accept criticism from non-Muslims.

Before handling this topic, we must know first the meaning of criticism. According to Wikipedia’s definition, criticism is “the practice of judging the merits and faults of something or someone in an intelligible (or articulate) way.”

Actually, Muslims do not have any objection to having their merits and faults judged in an intelligible (or articulate) way. So long as Muslims are made subject to objective criticism driven by a real desire for reaching the truth, Muslims even welcome criticism.

Muslims just have reasonable reservations concerning criticism. They stipulate that their critics should satisfy certain conditions for their criticism to be constructive.

They require that their critic should be a genuine truth seeker who is considerate to their sensitivities and avoids offending them gravely. Such requirements sound quite palatable. They are indispensable to any human dialogue, interaction or communication.

The Qur’an prohibits Muslims from insulting non-Muslims so that they will not reciprocate insult with more terrible one. Allah says:

And do not insult those they invoke other than Allah, lest they insult Allah in enmity without knowledge. Thus We have made pleasing to every community their deeds. Then to their Lord is their return, and He will inform them about what they used to do.” (Al-An`am 6:108)

Accordingly, Islam calls for respectable dialogue between Muslims and non-Muslims where each party expresses due respect for the other in quest of positive outcome and fruitful interaction. Abuse is unlikely to yield any favorable result. It may lead only to mutual dislike, hatred and grudge.

The criticism described above is quite acceptable by Muslims. There are many examples of criticisms which seemed acceptable to Muslims. For example, to teach Muslims to tolerate difference, the Qur’an tells Muslims that Allah accepted the objection voiced by the angels when He told them that He was going to appoint a vicegerent on earth. Allah says:

And [mention, O Muhammad], when your Lord said to the angels, “Indeed, I will make upon the earth a successive authority.” They said, “Will You place upon it one who causes corruption therein and sheds blood, while we declare Your praise and sanctify You?” Allah said, “Indeed, I know that which you do not know.” (Al-Baqarah 2:31)

And among them are those who abuse the Prophet and say, ‘He is an ear.’ Say, ‘[It is] an ear of goodness for you that believes in Allah and believes the believers and [is] a mercy to those who believe among you.’ And those who abuse the Messenger of Allah – for them is a painful punishment. (At-Tawbah 9:61)

However, Muslims object to criticism if it is unfair, unjustifiable, baseless, abusive or not intended for reaching the truth. Moreover, when criticism assumes the form of mockery, offensive satire, parody, or abusive comedy, nobody can accept such criticism.

The rejection of such morally repugnant forms of criticism is quite justifiable. Muslims cannot be compelled to accept something which is humanly unacceptable. It is the impolite critics of Muslims who should be taught respect for Muslims to accept their criticism.

Muslims make a fair demand. They respect others and require others to respect them. What is wrong with that? The problem with the West now is that its current value system is very materialistic. It recognizes harm only if it is a material one. But, we as Muslims always acknowledge the other’s moral criterion. Muslims do not accept abuse to any religion, including Christianity, or the prophet of any religion, including Jesus, nor do they agree that religion becomes a subject of humor.

Muslims may tolerate abuse to themselves, but not to their religion or their Prophet. Yet, this does not exempt Muslims from blame. There are Muslims who commit faults, sometimes major ones. But, Muslims argue that their faults should not be attributed to Islam or Prophet Muhammad but to themselves.

They are always ready for dialogue, but there should be no abuse. Otherwise, abuse will entail abuse and so on. This will not be in favor of any party, either Muslims or non-Muslims. Each party should understand the other so that they will avoid clash and conflict and coexist in peace and security.

At last, it is quite safe to say that what abuses others is something to be known from them rather than from oneself. One cannot decide for others what offends them and what does not, nor should he tell them when they should feel offended and when should not.