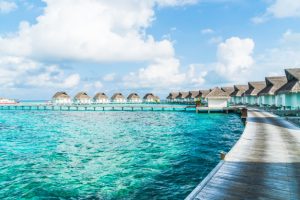 Esteemed and loved by all Muslims and known as a pious and devout woman, Mary, the mother of Jesus was chosen above all other women.

Islam rejects the Christian notion that Jesus is part of a trinity that is God, and denies emphatically that either Jesus or his mother, Mary, are worthy of worship. The Quran categorically states that there is no god but God.

Such is God, your Lord! None has the right to be worshipped but He, the Creator of all things. So worship Him … (Al-An`am 6:102)

Islam commands Muslims, however, to believe in and love all of the Prophets, including Prophet Jesus (peace be upon him), who holds a special place in the Islamic creed. His mother, Mary, holds a place of honor.

As a young woman, Mary went into the House of Prayer in Jerusalem, her entire life dedicated to the worship and service of God.

Mary Hears the News of Jesus

While she was in seclusion from everybody, a man appeared before Mary. God said:

She screened herself from them; We sent to her Our Spirit, and he appeared before her in the form of a man in all respects. (Maryam 19:17)

Mary was afraid and tried to flee. She appealed to God saying:

Verily! I seek refuge with the Most Gracious (God) from you, if you do fear God.” The angel said: “I am only a Messenger from your Lord to you, announcing the gift of a righteous son. (Maryam 19:18-19)

Mary was amazed and puzzled by these words. She did not marry, rather a virgin who kept chaste. She asked incredulously:

God created Adam from the dust of the earth, without either mother or father. He created Eve from Adam’s rib; and Jesus, He created without a father, but with a mother, the pious Virgin Mary. God, who has only to say ‘Be’ to a thing in order to bring it into existence, blew the spirit of Jesus into Mary via the Angel Gabriel.

‘And We breathed into it through Our Spirit, and she testified to the truth of the Words of her Lord … (At-Tahrim 66:12)

Although the stories of Mary in the Quran and in the Bible have many aspects in common, the view that Mary was betrothed or married is totally rejected by Islam.

Time passed, and Mary became afraid of what the people around her would say. She wondered how they could possibly believe that no man had touched her. The majority of scholars in Islam agree that the duration of Mary’s pregnancy was normal. (Sheikh Al-Shanqiti in his Adwaa’ Al-Bayan)

Then, as the time came for her to give birth, Mary decided to leave Jerusalem, and traveled towards the city of Bethlehem. Even though Mary must have recalled the words of God, for her faith was strong and unwavering, this young woman was anxious and uneasy. But the angel Gabriel reassured her:

O Mary, Verily God gives you glad tidings of a word from Him, whose name will be the Messiah, Jesus, the son of Mary – held in honor in this world and the Hereafter and will be one of those who are near to God. (Aal `Imran 3:45)

The pains of childbirth drove her to clutch at the trunk of a date-palm tree and she cried out in anguish:

Would that I had died before this, and had been forgotten and out of sight! (Maryam 19:23)

Mary delivered her child right there, at the foot of the date tree. She was exhausted after the birth, and filled with distress and fear, but nevertheless she heard a voice calling out to her.

Grieve not! Your Lord has provided you a stream of clear water under you; and shake the trunk of palm tree towards you; it will let fall fresh ripe dates upon you. So eat and drink and be glad… (Maryam 19:24)

God provided Mary with water, as a stream suddenly appeared beneath the place she was sitting. He also provided her with food; all she had to do was shake the trunk of the date tree. Mary was scared and frightened; she felt so weak, having just given birth, so how could she possibly shake the immense trunk of a date tree? But God continued to provide Mary with sustenance.

The next event was indeed another miracle, and as human beings we learn a great lesson from this. Mary didn’t need to shake the date tree, which would have been impossible; she only had to make an effort. As she attempted to follow God’s command, fresh ripe dates fell from the tree and God said to Mary: “…eat, drink and be glad. (Maryam 19:26)

Mary now had to take her new born child and go back to face her family. Of course she was afraid, and God knew this well. Thus, He directed her not to speak. It would not have been possible for Mary to explain how she had suddenly become the mother of a new born child. Since she was unmarried, her people would not believe her explanations:

And if you see any human being, say: ‘Verily! I have vowed a fast unto the Most Gracious (God) so I shall not speak to any human being this day.’ (Maryam 19:26)

Mary came to her people carrying the child, and they immediately began accusing her; they exclaimed: ’what have you done? You are from a good family, and your parents were pious’.

As God had directed her, Mary did not speak, she merely pointed to the baby in her arms. Then Jesus, son of Mary, spoke. As a newborn baby, Jesus, the Prophet of God performed his first miracle. By the permission of God, he said:

Verily! I am a slave of God. He has given me the Scripture and made me a Prophet; and He has made me blessed wheresoever I be, and has enjoined on me prayer, and alms, as long as I live, and to be dutiful to my mother, and made me not arrogant, unblest. And peace be upon me the day I was born, and the day I die, and the day I shall be raised alive! (Maryam 19:30-34)

Mary is referred to in the Quran as a siddiqah (truthful one):

The Messiah, son of Mary is but a messenger; messengers before him have indeed passed away; and his mother was a Siddiqah (a truthful woman); they both used to eat food. See how We make the communications clear to them, then behold, how they are turned away. (Al-Ma’idah 5:75)

But the Arabic word siddiqah implies more than just speaking the truth. It means that one has achieved a very high level of righteousness. It means that one is truthful, not only with themselves and those around them, but also with God.

Mary was a woman who fulfilled her covenant with God, Whom she worshiped with full submission. She was pious, chaste, and devout; the woman chosen above all other women to be the mother of Jesus was Mary, the daughter of `Imran.

Aisha Stacey is an Australian revert to Islam. She currently spends her time between Australia and Qatar. Aisha works as a writer at the Fanar Cultural Islamic Centre in Doha, Qatar while studying for an Arts/Psychology degree.