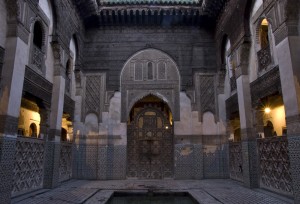 Learning institutions in Muslims lands took a variety of shapes and sizes and ranged from Madrasas, khans, Mosques, and academies of diverse sorts. These institutions, as S.P. Scott notes, [1]

“….composed voluminous treatises on surgery and medicine. They bestowed upon the stars the Arabic names which still cover the map of the heavens. Above the lofty station of the muezzin, as he called the devout to prayer, were projected against the sky the implements of science to whose uses religion did not refuse the shelter of her temples,—the gnomon, the astrolabe, the pendulum clock, and the armillary sphere.” [2]

It is already known that institutions such as al-Qayrawan, al-Qarawiyyin and al-Azhar, above all, were amongst the first universities throughout history. Another great body of institutions initiated by the Muslims were the Madrasas, or colleges, [3] of which Ibn Jubayr (d. 614H/1217CE) counted thirty on his visit to Baghdad. Before we take a close look at a Madrasa by the name of al-Mustansiriyah, [4] we will first receive a background of how learning institutions thrived in Muslim lands.

Following the establishment of Seljuk rule, Muslim lands experienced a considerable rise in the number of scholarly institutions, which were largely sponsored by the powerful and wealthy elite. Hence, in Iraq it was the Vizier Nizam al-Mulk (d. 485H/1092CE) that both founded and took responsibility for the spread of Madrasas within his jurisdiction. Al-Mulk founded the Madrasa system towards 459H/1066CE within Baghdad, and was then responsible for the spread of such institutions to the more Eastern parts of the Muslim World. According to Abu Shamah, ‘the schools founded by Nizam al-Mulk are very famous all over the world. No single village lacks one of these schools.’ [5] The state exercised some supervision over teaching, such as that at the Nizamiyya, in which the permission of the Caliph had to be obtained before a teaching post was occupied. [6]

Following Nizam al-Mulk, it became a practice, or rather a competition between rulers, to build more Madrasas. Nur ad-Din, who ascended to the throne in 541H/1148CE, founded many such institutions in Damascus and the other large cities of his kingdom. In Egypt, it was Salah ad-Din who founded five colleges in Cairo, followed by over twenty six other such Madrasas that were established by both his followers and later Mamluk sultans. [7] Individuals, too, did the same. A Madrasa for women was established in Cairo in 634H/1237CE by the daughter of the Mamluk Sultan Tahir, while Khatun, the daughter of Malik Ashraf constructed a women’s Madrasa in Damascus; yet another such Madrasa was founded by Zamurrad, wife of Nasir ad-Din of Aleppo. [8] The spread of the Madrasa was so rapid that at some point in the medieval times, according to Tawtah, [9] there were 73 colleges in Damascus, 41 in Jerusalem, 40 in Baghdad, 14 in Aleppo, 13 in Tripoli, 9 in al-Mawsil and 74 in Cairo, in addition to numerous institutions in other cities. A later author, writing around 1,500, counted about 150 Madrasas in Damascus alone. [10] At some point, the whole of the Muslim land with the exception of Spain and Sicily was just a wide, dense network of colleges, of varying sizes, providing education to tens of thousands, maybe hundreds of thousands of pupils, at a time, when education in Europe was just the privilege of a minority of clergy or the top elite, most certainly not exceeding the few hundreds.

Jerusalem had a great number of famed institutions, described in great detail by the late medieval scholar, Qadi Mudjir ad-Din (d. 918H/1521CE). [11] Inside al-Aqsa Mosque, just near the women’s area, is the Madrasa Farisiya founded by Emir Faris ad-Din al-Baky. There were also the Madrasas Nahriya and Nasiriya. The latter was named after the Jerusalem scholar, Sheikh Nasr, before it became known as the Ghazaliya, after the famed scholar al-Ghazali, as it was a place both of his residence and employment. Outside of al-Aqsa Mosque were the Qataniya, the Fakriya, al-Baladiya and the Tankeziya. The latter, says Ibn Mudjir, is an immense Madrasa, situated on the Khatt road (it is also worth noting that the founder of this Madrasa Emir Tankiz Nasri, vice ruler of Syria, was also responsible for building the aqueduct for the water supply of Jerusalem). A number of the Madrasas within and around al-Aqsa Mosque were built by Turkish women. For example, the Madrasa Othmania was constituted in trust by a woman belonging to one of the greatest families of the country, Isfahan Shah Khatun in the year 920H/1523CE. Earlier, in 751H/1354CE, the Khatuniya Madrasa was constituted in a trust by Oghl Khatun, daughter of Shams ad-Din Mohammed ibn Sayf ad-Din of Baghdad. This Madrasa itself was financed by the local businesses. [12]

Shalaby offers an excellent description of one such illustrious Madrasa: al-Nuriyyah al-Kubra in Damascus [13] founded by Nur ad-Din, which was described by Ibn Jubair as one of the best colleges in the world. [14] Here follows the summary of Shalaby’s description:

“The school is situated in Khatt al-Khawwasin which is now called `al-Khayyarin’, about half a mile south west of the Umayyad Mosque. The school has a ‘monumental’ entrance: an arch with an outer door, and a broad passage leading to the court with a second door halfway along. The lintel of the outer door is adorned with the endowment tablet. The school had its Iwan, which then, was the most important place in the Muslim school. It is the equivalent of the modern lecture room, and there where the halaqat were held. Not far from the Iwan was the Mosque, which took the significant place in a medieval school. The Mosque was also open to other worshippers, and it was thus normal that it was remote from the Iwan. The school also included eight lodges for the students, and the caretaker’s lodgings, the latrines, and also a kitchen and dining hall, the food store, and the general store for the building. This Madrasa, in most parts, still stands up to now.”[15]

Madrasas varied in size and layout, some were small with one or two classrooms, whilst others were much larger, and with huge libraries, and facilities and large lecture halls. As far as al-Mustansiriyah is concerned, according to Dodge, it was the college which, at the time, ‘most closely resembled a university.’ Two good descriptions, taken from original sources: Yaqut [16] and Naji [17], by Dodge [18] and Nakosteen [19] which are presented together below:

“The Mustansiriyah was founded in 631 H/1234 A.D by Caliph al-Mustansir. He was the penultimate Abbasid Caliph, the father of al-Mustassim, who was later to be put to death by Hulagu. It was located immediately south of the Gharabah gate, on the shore of the Tigris. It was built as a large, two-storied structure. In its outward appearance, and its internal sumptuousness and wealth, the Mustansiriyah surpassed all that was previously seen in Islam. It was oblong in shape with a great open court in the centre. Around the courtyard there were rooms for teachers and students, opening out to arched cloisters. Nearby, the Great Mosque of the Palace (Jami al-Kasr) was also restored by Mustansir, who also restored the four platforms (Dikkah) on the Western side of the pulpit. There, the students sat and held their disputations after the Friday public prayers. The remains of this Mosque still exist to the present.

“At the Mustansiriyah, professors received monthly salaries, and the three hundred students received each one gold dinar a month. The college had large lecture halls, where students were taught by a head professor and his assistants. There were also small classes, tutorial like, of a teacher for ten students. Students learnt subjects that included the traditional linguistic, legal and religious subjects, but also arithmetic, land surveying, history, poetry, hygiene, the care of animals and plants and other phases of natural history. There was also a course in medicine with a physician in charge.

“The Mustansiriyah included major facilities. It had a very large library, manned by a librarian with an assistant and attendants. According to Ibn al-Furat, the library (Dar al-Kutub) had rare books dealing with various sciences, and made available easily to students, either for consultation, or copying. Pens and paper were supplied, and so were lamps and due provision of oil. The students also received medical care and financial aid, in addition to free tuition. Daily rations of bread and meat were also provided to all inmates by a large kitchen. Somewhere in the building were store rooms and bathing facilities (hamam). Also attached to the college was a hospital with a dispensary and rooms for teaching medicine. One of the rarities of the Mustansiriyah was its famous clock, set in a design of the heavens, with twelve doors, each opening to announce the hour.

“The Caliph al-Mustansir himself took great interest and passion in the work of ‘his’ institution and inspected it nearly every day. He also had a belvedere (Manzarah) overlooking the college, with a window opening upon one of the college halls, from where he watched the building, and heard the lectures of the professors and the disputations of the students. Just a century after its foundation, Ibn Battuta, who visited Baghdad in AH 727 (1327), speaks of the magnificence of the place, which by miracle, escaped the Mongol sacking of Baghdad (in 1258). He states that lectures were still provided. Twelve years after him, the geographer Hamd Allah also refers to the Mustansiriyah as the most beautiful building in Baghdad.

“The Mustansiriyah appears to have stood intact for many centuries, but surely not by the mid-18th. Then, when Niebuhr visited Baghdad in 1750, he found that the ancient kitchen of the college was being used as a weighing house. Today, only ruins of it remain.”

“The age of Arabian learning,” Gibbon observes, “continued about five hundred years, till the great eruption of the Moguls, and was coeval with the darkest and most slothful period of European annals; but since the sun of science has arisen in the West, it should seem that the Oriental studies have languished and declined.” [20]

Given Islam’s love for knowledge and its elevation of scholars and writers to exalted positions, the evolution of a publishing industry was a foregone conclusion at the advent of Islam [21]. Within one hundred years after the advent of Islam, a sophisticated and highly integrated book industry was flourishing in the Muslim world. Techniques were evolved for each stage of book production: composition, copying, illustrating, binding, publishing, storing and selling. Reading books, as well as hearing them being dictated, became one of the major occupations and pastimes. In certain major cities, such as Baghdad and Damascus, almost half the population was involved in some aspect of book production and publication. However, book production was both an industry and an institution, an institution with its own customs and practices, its own checks against fraud and misrepresentation and, above all, an institution that ensured that learning and books were not the prerogative of a select few but were available to all those who had the desire. It also ensured that the scholars and authors themselves also benefited, both economically and in terms of recognition from their work [22].