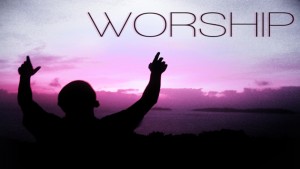 It is a matter of nature that human beings feel and express gratitude to anyone who benefits them. Such gratitude varies in extent according to the magnitude and importance of the favors done.

Human beings usually express relative gratitude to one another. Such gratitude may assume various forms. However, it should not take on the form of worship for worship is reserved for the Creator only. No matter how many favors a human being may do for a fellow human being, such favors cannot stand comparison with the least of the blessings of the Creator.

Suffice it to say that the very blessing of creation per se is much greater than any favors a human being may do for another human being. That is why, logically speaking, an act of worship can be done only for the Creator alone, without any associate or partner.

This sounds quite logical and reasonable. That is what is preached by the true religion of God (based on monotheism) everywhere and every time throughout history. In the Old Testament, we read, as the first commandment, the following verse: “Hear, O Israel: The Lord our God is One Lord.” (Isaiah 43:10-11)

We find an equivalent commandment in the Qur’an:

And [recall] when We took the covenant from the Children of Israel, [enjoining upon them], “Do not worship except God… (Al-Baqarah 2:83)

The Qur’an also tells us that all prophets worshiped God alone and instructed their people to do the same.

And We sent not before you any messenger except that We revealed to him that, “There is no deity except Me, so worship Me.” (Al-Anbiyaa’ 21:25)

Or were you witnesses when death approached Jacob, when he said to his sons, “What will you worship after me?” They said, “We will worship your God and the God of your fathers, Abraham and Ishmael and Isaac – one God. And we are Muslims [in submission] to Him.”(Al-Baqarah 2:133)

Usually, God tells His servants to worship Him alone in such clear-cut terms which can never be misunderstood:

Worship God and associate nothing with Him in worship (An-Nisaa’ 4:36)

Unfortunately, on earth, there are many religions which preach polytheism. One of such religions is the present-day Christianity though it is still considered one of the Abrahamic religions which were revealed by God, regardless of the considerable distortion to which it was systematically exposed.

Though the modern Christians have several polytheistic beliefs like trinity and the divinity of Jesus, we still find several verses in the New Testament which confirm monotheism. For example, we read a dialogue between the Devil and Jesus where the latter told the former that it is God only Who must be worshiped alone. The New Testament cites such a dialogue as follows:

Also, the New Testament tells us that Jesus taught his followers that they should pray to God alone to the exclusion of anybody else, including Jesus himself. In the New Testament, we read the following verse: “Do not hold on to me, for I have not yet ascended to the Father. Go instead to my brothers and tell them, ‘I am ascending to my Father and your Father, to my God and your God.’” (John 20:17)

“Very early in the morning, while it was still dark, Jesus got up, left the house and went off to a solitary place, where he prayed.” (Mark 1:35)

“After he had dismissed them, he went up on a mountainside by himself to pray. When evening came, he was there alone.” (Matthew 14:23)

“One of those days Jesus went out to a mountainside to pray, and spent the night praying to God.” (Luke 6:12)

Jesus said, “Father, forgive them, for they do not know what they are doing.” And they divided up his clothes by casting lots. (Luke 23:34)

Here, we must raise a very important question: Can God worship God? Can God pray to God?

Given that Jesus worshiped and prayed to God, this means that Jesus took God as his guardian and creator. How can God be created, sustained, or provided for by someone else? God creates, sustains and provides for others, not vice versa.

In this regard, the Qur’an says:

And [beware the Day] when God will say, “O Jesus, Son of Mary, did you say to the people, ‘Take me and my mother as deities besides God?’” He will say, “Exalted are You! It was not for me to say that to which I have no right. If I had said it, You would have known it. You know what is within myself, and I do not know what is within Yourself. Indeed, it is You who is Knower of the unseen.

I said not to them except what You commanded me – to worship God, my Lord and your Lord. And I was a witness over them as long as I was among them; but when You took me up, You were the Observer over them, and You are, over all things, Witness.

If You should punish them – indeed they are Your servants; but if You forgive them – indeed it is You who is the Exalted in Might, the Wise. (Al-Ma’idah 5:116-118)

There is no objection to paying tribute to Jesus as a prophet of God. It is lawful for people to praise their prophets. However, such praise should not amount to worship. In this respect, the Qur’an says:

O People of the Scripture, do not commit excess in your religion or say about God except the truth. The Messiah, Jesus, the son of Mary, was but a messenger of God and His word which He directed to Mary and a soul [created at a command] from Him. So believe in God and His messengers. And do not say, “Three”; desist – it is better for you. Indeed, God is but one God. Exalted is He above having a son. To Him belongs whatever is in the heavens and whatever is on the earth. And sufficient is God as Disposer of affairs.

Never would the Messiah disdain to be a servant of God, nor would the angels near [to Him]. And whoever disdains His worship and is arrogant – He will gather them to Himself all together. (An-Nisaa’ 4:171-172)

Islam urges belief in all prophets of God without exaggeration or discrimination. Muslims believe in Prophet Muhammad just as they do Prophet Jesus and the rest of the prophets of God. In the Qur’an, we read the following verse:

Finally, it is safe to say that Muslims revere and love Jesus as the prophet of God but they cannot worship him, for Muslims worship God alone. The Qur’an tells Muslims to say:

“O People of the Scripture, come to a word that is equitable between us and you – that we will not worship except God and not associate anything with Him and not take one another as lords instead of God.” But if they turn away, then say, “Bear witness that we are Muslims [submitting to Him].” (Aal `Imran 3:64)