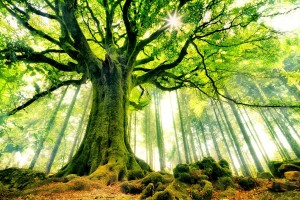 All Muslims are brothers of one another on account of sharing the same set of beliefs, though they may differ greatly from one another in outward features.

The believers are brothers in faith. So make peace and reconciliation between your brethren. And fear Allah so that you may receive His mercy. O Believers! Let not some men among you laugh at others. It may be that the latter are better than the former. Let not some women laugh at others. It may be that the latter are better than the former. And do not criticize one another, nor call them by offensive nicknames. It is bad to commit sin after professing belief. And those who do not repent are wrongdoers. O Believers! Avoid suspicion as much as possible. For in some cases suspicion is a sin. And do not spy on and backbite one another. Would any of you like to eat the flesh of your dead brother? You would abhor it. And fear Allah. Allah accepts repentance and is Most Merciful. O mankind! We have created you from a single pair of a male and female. And We have made you into nations and tribes so that you may know one another. The most honored of you in the sight of Allah is he who is the most pious of you. And Allah has full knowledge and is well acquainted with all things. (Al-Hujurat 49:10-13)

Avoiding any harm to fellow human beings is the main concern of this code of conduct for social life. The passage opens on a note of human fraternity and unity. Equally significant is the point that the passage concludes with the same message of mankind’s unity.

While discarding all notions of kinship based on ethnicity, language, color or caste, the Qur’an asserts the bond of faith as the unifying force. All Muslims are brothers of one another on account of sharing the same set of beliefs, though they may differ greatly from one another in outward features. This characteristic of Islam prompts an Orientalist to concede the point:

‘A Muslim is Muslim first and a Turk, an Afghan, or an Arab afterwards, and this is no mere formula or figure of speech.’

Instead the vast assemblage of peoples and of tongues to whom the Prophet of Arabia, by teaching them to worship the One True God, has given a bond of union stronger than any tie of blood or nation.

History bears testimony to the fact that Muslims as a community have demonstrated numerous instances of solidarity, cutting across barriers of race, color or language. In so doing, Muslims act on the following hadiths regarding the bond of unity to be found in Islam: The Prophet said, “None of you has faith until he desires for his brother what he desires for himself.” (Al-Bukhari and Muslim) In the same vein is his other observation: “To abuse a Muslim is an evil deed, and to fight him, an act of unbelief.” (Al-Bukhari)

That Islam inculcated this ideal of the equality and unity of all Muslims among its immediate addressees –the Arabs– is all the more striking in view of the fact that the Arabs of the day were very particular about their clan identity, tribal pride and ancestral fame.

The ideal of social equality, as professed and practiced by early Muslims, was the key to the phenomenal spread of Islam across all parts of the world. The exploited and the deprived reeling under yokes of bondage saw Islam with its teachings and practice of equality and fraternity as their champion and warmly embraced it in large numbers.

On the import of the opening verse of the passage M. Manazir Ahsan makes this perceptive comment:

The basic idea which Islam wants to bring home is the equality of mankind and the establishment of all relationships on the basis of faith; a relationship which stands above that of blood.

If a blood relationship stands in the way of Islam, it is to be rejected in favor of faith. The Qur’an does not turn a blind eye to the human weakness of quarrel, dispute and even war.

Accordingly, it exhorts Muslims to make peace among hostile individuals or groups. Of special note in this context is the Qur’anic use of the expressions “brothers in faith” and “fear of Allah”. Even while mutual relations among some Muslims are strained, they should not forget that they are essentially brothers of one another.

They should sort out their differences in a brotherly manner, characterized by affection, love and sincerity. Moreover, they should realize all along that Allah, their supreme Lord, constantly watches them. Any injustice done by either party cannot escape His notice. It will, however, provoke His anger and punishment which will destroy them wholly.

They should therefore desist from doing any wrong to fellow Muslims and behave only in such a way as may earn them His mercy. The main idea of Muslim brotherhood adumbrated in the verse is elucidated in several hadiths, of which the following are cited as instances in point:

“Believers are to one another like the bricks in a building, in which every brick is supported and strengthened by another.” (Al-Bukhari)

Believers represent a single body in terms of their mutual love, kindness and affection. If one part of the body is hurt, the entire body feels its pain. (Al-Bukhari and Muslim)

The life, property and honor of one Muslim are sacred for other Muslims.

This declaration of the unity and equality of mankind is interlinked with the above cited prohibition against mocking, reproaching and nicknaming others and of suspicion, slander and backbiting. For one indulges in the above out of one’s own false pride and sense of superiority.

The Qur’an therefore, stresses the truth that all men and women are equal. Piety alone makes one superior to others. Given this, one should refrain all the more from hurting and harming others. The same note of social justice, and human equality and fraternity is to the fore in the Prophet’s sermon at his farewell pilgrimage when he addressed a huge congregation of Muslims at `Arafat: “No Arab is superior to a non-Arab and no non-Arab has any superiority over an Arab. No black has any superiority over a white person and no white over a black one. Piety alone confers superiority on one. All men are from Adam and Adam was made of clay.”

In the Qur’anic passage above the emphasis is on building cordial, happy social relations among men and women, regardless of their affiliations. The directives aim at forging and sustaining a mutually helpful and trustworthy community life, ensuring peaceful coexistence among all members of society.

Social justice is the distinct message of the passage. It seeks to infuse such virtues which guarantee a happy, peaceful life for everyone. It resounds with a strong plea for a tension free society, without social, emotional and psychological strains. The lesson of tolerance, forgiveness and cordial social relations is unmissable.

If these directives are followed sincerely, we may construct a happy and peaceful society, free from public disorder and the resultant tendencies of violence and revenge.

The article is an excerpt from Abdur Raheem Kidwai’s book “The Qur’an: Essential Teachings”, published by the Islamic Foundation, 2005/1426 H.