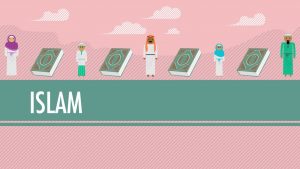 Our children should be raised on the values of convergence in Islam, just as the western culture should be fair and balanced, so that we may reach a mid-way meeting point.

Love and justice are the controls of the relationship of Islam with the ‘other’. This is provided that the ‘other’ neither forces us to leave Islam nor expels us out of our lands. The Qur’an explicitly states this concept in the verse that reads:

Allah does not forbid you to deal justly and kindly with those who fought not against you on account of religion and did not drive you out of your homes. Verily, Allah loves those who deal with equity. (Al-Mumtahanah 60:8)

These are the prerequisites of Islamic friendship for other cultures or peoples. The verse is general in its application and includes all people and religions. Islam represents benevolence which embraces all kinds of good treatment, such as maintaining the ties of kinship, righteousness, philanthropy and goodness. As Islam promotes benevolence by placing it on the highest level of human relations, we in turn must find out how to practically put this divine command into application.

Our children should be raised on the values of convergence, just as the western culture should be fair and balanced, so that we may reach a mid-way meeting point. Fanaticism makes a person blind and deaf regarding the other.

Therefore, the actual criterion for justly evaluating the behavior of any culture regarding other cultures depends on its actions at times of triumph.

Fanatical behavior takes many forms and colors. History tells us about the organization of genocide and mass displacement against people, performed under the pretext that those people were ‘foreigners’. We will mention some examples of this behavior when we discuss the situation of Islam regarding the ‘other’. There are also many recorded acts of fanaticism, which have included people depriving others of their civil rights, personal and religious liberty by rejecting their views and values. We will provide testimonies of western authors and texts of the Shari`ah (“Islamic law”) that conclusively prove that Islam is historically not fanatic in any sense of the word.

Thomas Arnold once said: “If the Muslim Caliphs made use of one of the two plans, temptation or eradication, they would have easily destroyed Christianity, just as Ferdinand and Isabella did with Muslims in Andalusia, or Louis XIV who punished followers of the Protestant doctrine in France, or like the Jews who were kept banished from England over three hundred and fifty years.” (Da`wah to Islam, p. 99) According to the western thinker: “Muslims should be proud of the Prophet (peace be upon him) who did not cause harm to anyone during the conquest of Mecca. Therefore, the people of Mecca embraced Islam in spite of the great enmity, hostility and wars against him. Rather, he said illuminated words, “This is a day of peacefulness and today the Quraysh is honored.” He said to them while he was standing by the door of Ka`bah and they were fearful surrounding him, “Go, you are free.”

“The policy of religious tolerance adopted by Islamic governments regarding its Christian subjects in Spain and the freedom of mixing between followers of different religion gave birth to a degree of homogeneity and resemblance between both sides and marriage spread between them. Pope Adrian I expressed his concern about this familiarity between Catholics and Muslims.” (Da`wah to Islam, p. 159) These are just some of the testimonies that prove that the claims, that Islam aims to destroy other religions, are groundless. Yet, the texts of Shari`ah indicate a kind of acceptance of the existence and continuation of some cultures and commend their values. Almighty Allah says regarding Christians:

And you will find the nearest in love to the believers those who say, “We are Christians. (Al-Ma’idah 5:82)

It was authentically reported in Muslim that Al-Mustawrid said to `Amr ibn al-As: “I heard Allah’s Messenger (peace be upon him) saying, “The Hour will come while Romans are the greatest in number among people.” `Amr said, “Think about what you said.” Al-Mustawrid replied: “I have said what I heard from Allah’s Messenger.” `Amr said: “Have you said that, they have four characteristics: they are the most forbearing people at times of sedition; the quickest recovering after disasters; the first to re-attack after retreat; the most benevolent towards the poor, the orphans, and the weak; and — the fifth and noblest feature-the most resistant to unjust kings?” (Muslim)

It is important to point to this commendation of the Romans and their culture, from one of the Companions of the Prophet who conquered and ruled Egypt. This indicates an early Muslim view of the Christian culture in the West and a deep understanding of the characteristics of their rival but with an equitable stance nonetheless. Almighty Allah says:

And reduce not the things that are due to people, and do not commit mischief in the land, causing corruption. (Hud 11:85)

It was reported in a less sound hadith, regarding the end of the two great nations that: “Persia is one or two battles, then it is destroyed. Byzantium is generations, when a generation perishes another one succeeds it. (They are) people of patience, and people of patience are to live to the end of this world. They are your friends so long as living (with them) is good.”

It is reported in the hadith of Ibn Majah that the Companions of the Prophet (peace be upon him) who were in Abyssinia told him about an old Christian nun who was attacked by a young man from Abyssinia. The young man pushed her so that the water jar on her head was broken. She warned him against standing before Allah. The Prophet (peace be upon him) said to her, “Ratified, ratified.  How Allah sanctifies a nation in which the right of the weak is not taken from the strong.” (Ibn Majah)

These words indicate the nomination of virtue, regardless of its origin and that following the example of other nations in their virtues is desirable because “wisdom is the aim of the believer.” That is the position of Islam, which is represented in the interaction of civilizations within a common human scope.

Source: Taken with modifications from Binbayyah.net