Concept of Jihad in Modern Time

The concept of Jihad (combat) occupies one of the most critical contemporary concepts, as much confusion permeated in the light of the facts of modern time and twisted Western interpretations of it.

In the face of this deliberate misrepresentation of this concept, many religious thinkers are either shying entirely from it or directing it in a way not consistent with its reality.

Christians claim that Jihad in Christianity is restricted to “spiritual jihad only”, and that Christians do not have to respond to any aggression! A Christian writer says: “There is no kind of Jihad in Christianity other than Jihad against sin and against the lusts, hatred, envy, killing and persecution; It is the Jihad that brings people to a life of adherence to God, love, purity, serenity, and complete inner peace with God and people.” They support such sayings by some biblical citations, including:

“Make every effort to enter through the narrow door, because many, I tell you, will try to enter and will not be able to.”

“Am I a Jew?” Pilate replied. “Your own people and chief priests handed you over to me. What is it you have done?” Jesus said, “My kingdom is not of this world. If it were, my servants would fight to prevent my arrest by the Jewish leaders. But now my kingdom is from another place.”. 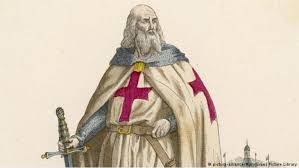 “Fight the good fight of the faith. Take hold of the eternal life to which you were called when you made your good confession in the presence of many witnesses..”

“I have fought the good fight, I have finished the race, I have kept the faith..”

“But even if you should suffer for what is right, you are blessed. “Do not fear their threats; do not be frightened.”

However, we found the ecclesiastical interpretation of Christian Jihad has been translated into the Crusades against the homes of Muslims in the form of a vicious Material “Holy War” “not a spiritual one”!

They were categorically against the noble teachings and ethics encouraged by the Muslim Jihad. The Christian holy war was not as alleged a spiritual jihad, for Christians launched aggression against innocent Muslims homes and holy shrines, and even  against innocent Christians themselves in Jerusalem.

The Christian Jihad was carrying the holy banners of the popes and the fathers, and the war was in the name of the Lord.

When faced with such  astonishing facts, many Christian thinkers began to disavow their European fellow citizens and say that they are Christians who deviated from the right teachings of Christ. So, they interpreted this Christian Jihad according to their whims.

However, needless to say, in different rites, many Christians worldwide, consider the ecclesiastical  consensus to be legal, sacred and should not be violated, even if it was  not said by Jesus! Would they disregard the ecclesiastical or Church war represented in the crusades, even if they war which were considered blessed by both the Church and God?!

In Christianity we find signs of “A Christian material Jihad” where Jesus commands his followers to carry the sword, saying:

“The angel answered, “The Holy Spirit will come on you, and the power of the Most High will overshadow you. So the holy one to be born will be called the Son of God. Even Elizabeth your relative is going to have a child in her old age, and she who was said to be unable to conceive is in her sixth month. For no word from God will ever fail.”I am the Lord’s servant,” Mary answered. “May your word to me be fulfilled.” Then the angel left her.”(Luke 22: 35-38).

“So he called ten of his servants and gave them ten minas. ‘Put this money to work,’ he said, ‘until I come back.” But his subjects hated him and sent a delegation after him to say, ‘We don’t want this man to be our king. He was made king, however, and returned home. Then he sent for the servants to whom he had given the money, in order to find out what they had gained with it….. But those enemies of mine who did not want me to be king over them–bring them here and kill them in front of me.”(Luke 19:13 -27).

But the distortion-drama in the Bible did not receive those text in their real intent, so we see  opposite and contradicting texts in one context!

Jesus orders his followers to carry their swords in the face of the Romans, then he discourage them from injuring them with their swords!

“When Jesus’ followers saw what was going to happen, they said, “Lord, should we strike with our swords?” And one of them struck the servant of the high priest, cutting off his right ear. But Jesus answered, “No more of this!” And he touched the man’s ear and healed him.”(Luke 22: 49-51).

The truth that is absent from many Christian minds is that the Fathers included in the Bible the thing and its opposite. When they wanted to wage a holy war, they advanced texts to justify them, and in times of weakness, they construed the same texts to mean “spiritual jihad”!

Jihad, although not found in the Bible by its explicit term in the meaning of fighting enemies, is pragmatically present  in biblical commands to struggle against “pagans and the enemies of the Lord”.

This is further supported by and was translated in the wars of David and other Bible prophets, and Jesus’ silence regarding them; Jesus  was following the laws of Moses and the Torah before him was commanded not to nullify them: “I was not sent to break the law”.

The Qur’an cites Jesus’ approval of Moses’ scripture and its legislation saying says:

“And [I have come] confirming what was before me of the Torah and to make lawful for you some of what was forbidden to you. And I have come to you with a sign from your Lord, so fear Allah and obey me.” (3:50)

Jesus, being not acting upon Jihad, does not mean that he aimed to nullify it , because he did not intend to lead a state in the full sense of the word, but he intended to reform the children of Israel after they deviated from the teachings of the Torah.

Therefore, he came with spiritual teachings, preaching them, and reminding them of that law that they deviated from, including the struggle against both souls and enemies.

This is evidenced by the fact that the Holy Bible’s, especial New-Testament, writers did not delete the wars and the practical struggles in the Old Testament (See Psalm 46). (1 Samuel 17) (Isaiah 6) (And see II Chronicles) (II Kings – Chapter 3) (1 Samuel Chapter 4) (Psalms XVIII).

What motivated Christians to disregard this divine legislation represented in Jihad,  is the distortion that this concept, and other concepts, has acquired in Christianity.

Jesus’ message, in its real image,  foretold the appearance of a new peaceful message approving his message, that was the message of Islam that was a mercy for humanity:

“And [mention] when Jesus, the son of Mary, said, “O children of Israel, indeed I am the messenger of Allah to you confirming what came before me of the Torah and bringing good tidings of a messenger to come after me, whose name is Ahmad.” But when he came to them with clear evidences, they said, “This is obvious magic.”(61:6).

As for Jihad in Islam, it is only a means to support the weak; Material Jihad is only accomplished through fighting the soul, the devil, and the passions first.

The countries that the Muslims conquered felt the tolerance the of the followers of this religion with them. It became clear to them that they opened these countries only to deliver the message of heaven to them;  their  rights were guaranteed and ensured safety, and lived  among Muslims in peace. They enjoyed rights they did not obtain under the Roman state that adopted their religion. the Qur’an establishes the rules of peace and war saying:

“Fight in the way of Allah those who fight you but do not transgress. Indeed. Allah does not like transgressors” (2: 190).

Jihad in Islam has many conditions and has observed human rights. Prophet Muhammad says:

“Whenever he appointed a man to lead a military detachment, the Messenger of Allah  would advise him especially to fear Allah and treat the Muslims with him well. He said: ‘Fight in the Name of Allah and in the cause of Allah. Fight those how disbelieve in Allah. Fight but do not be treacherous, do not steal from the spoils of war, do not mutilate and do not kill children”. (Sunan b. Majah Book 24, Hadith 2967)

“Beware, if anyone wrongs a contracting man, or diminishes his right, or forces him to work beyond his capacity, or takes from him anything without his consent, I shall plead for him on the Day of Judgment..”( Sunan Abi Dawud 3052)

Abu Bakr, may God be pleased with him, the first caliph after the Messenger of God -may God bless him and grant him peace- followed the same way when he sent Osama’s army, saying:

“O people, stand up and I command you ten commandments so keep them: Do not betray, , do not treachery, do not represent Do not kill a child or an old man or a woman. and do not cut a palm-tree or burn it. Do not cut down a fruitful tree, and do not slaughter a sheep, a cow, or a camel except for a meal; you will pass by people (i.e. monks and priests) who have emptied themselves in the tents (or temples), so leave them.”