The Quran says that when the night and the day overlap, they make a ball (sphere): 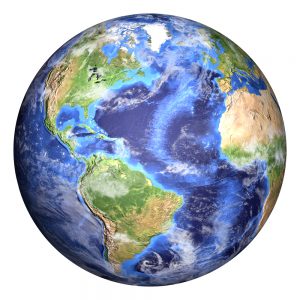 The rotation of Earth is slowing down.

{[Allah] Created the heavens and the Earth in truth. He overlaps the night over the day and overlaps the day over the night, and enslaved the sun and the moon. ALL MOVE to a prerecorded destiny. Is He not the Exalted, the Forgiver?} (Az-Zumar 39:5)

The Arabic word “kura” means ball; its verb “yukawer” means to make into a ball. The Quran says that the overlapping of the night and the day makes a ball (sphere).

How could an illiterate man who lived 1400 years ago have known that Earth is a sphere?

“ALL MOVE” here the Quran is referring to ALL MOVING, not only the sun and moon but also Earth. In Arabic grammar there is difference between the singular (one), binary (two) and plural (three or more).

The reference to binary is “kulahuma yajreean” however the Quran said “kullun yajree” referring to the plural (three or more). Since the sun and moon are just two but the Quran refers to three or more then according to the Quran all the three move: sun, moon and Earth.

How could an illiterate man who lived 1400 years ago have known that all move sun, moon and Earth?

The Quran says that Earth has a diameter (diameter is simply twice the radius).

{O company of Jinn and man, escape the diameters of the Heavens and the Earth if you can, You won’t escape without authority.} (Ar-Rahman 55:33)

Diameter in Arabic is qutr. Its plural is aqtar. Radii and diameters are properties of circles or spheres only. This conforms with the previous verse, to make into a ball [yukawer].

How could an illiterate man who lived 1400 years ago have known that Earth is a sphere?

The rotation of Earth is slowing down, that is, days are getting longer. The Quran says that Allah persistently asks more of the day and more of the night, that is, for the day to get longer:

{And your Lord, Allah, who created the Heavens and the Earth in six days and then settled on the Throne. [Allah] Covers the night with the day, asks for it persistently; and the sun and the moon and the stars enslaved by His orders. Is this not His creation and His command? Blessed be Allah the Lord of all the worlds.} (Al-A`raf 7:54)

How could an illiterate man who lived 1400 years ago have known that the days are getting longer?

“Sath” in Arabic means surface, however this surface can have any shape. It could have the shape of a saddle:

Wikipedia defines the saddle as:

This saddle shape is one type of “sath”. It could have any shape but unfortunately “sath” was mistranslated to flat. Flat in Arabic is “musattah” however it was not used in the entire Quran.

{And the earth We have spread it out, and set thereon mountains standing firm, and have produced therein every kind of lovely pairs (of plants).” (Qaf 50:7)

The Quran says that God spread out the Earth meaning increase in surface area during formation. ‘Madda’ in Arabic means ‘spread out’, however it was mistranslated to ‘flat’.

The Quran says that God spread out Earth, that is, increased the surface area. Our solar system is 4.57 billion years old. Earth started accreting concurrently with the sun and our neighbouring planets 4.57 bln years ago.

(The Bible says that Earth is a 2 dimensional flat disk and the heaven is like a canopy: Isaiah 40:22. And since Earth is flat then Jesus could see the entire Earth from a single high location Matthew 4:8)