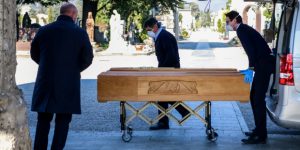 The cremation of corpses is considered mutilation and is thus prohibited.

What is the ruling of cremating the bodies of Muslims who have died as a result of Coronavirus (COVID-19)?

There is no disagreement among Muslims concerning the default ruling in this matter; in Islam, the cremation of corpses is considered mutilation and is thus prohibited.

In Islam, the deceased have an inviolability similar to that of the living. Prophet Muhammad (peace be upon him) said, “Fracturing the bone of a corpse is like fracturing it while they were alive.” (Abu Dawud)

There are specific instructions in our religion which govern how we honor the deceased and prepare their bodies for burial in a matter which is dignified. Our religion also prohibits sitting over or on graves, or walking over them for that matter.

Allah has even informed us that burying the dead is an act which He Himself has taught humanity, as mentioned in the story of the crow with the sons of Adam: {Then Allah sent a crow searching in the ground to show him how to hide the disgrace (body) of his brother…} (Al-Maidah 5:31)

When it comes to the cremation of corpses, this matter entails several factors:

Is cremation necessary for the survival of the living?

What if the issue is not the survival of the living, but rather it is the difficulty involved in having a traditional burial due to a lack of funds, or physical incapacity, etc.?
What is the ruling concerning cremating bodies when it becomes necessary in order to prevent imminent harm from reaching the living?

Below we discuss these matters in detail and offer our suggestions to the Muslim communities on how to handle this problem.

First: The idea that cremating the bodies of Coronavirus victims safeguards the living (by preventing the spread of infection) has not been proven at all.

A decision of this magnitude should not rely on conjecture alone, nor on the testimony of a doctor or two. Rather, this is a matter on which the public health authorities should agree or come close to agreement. This has not happened. In fact, the World Health Organization (WHO) has already published guidelines concerning the safe burial of Coronavirus victims (without cremation).

Second: As far as choosing cremation instead of burial because of difficulties involved in performing traditional burials, or because of financial hardships, we emphasize firstly that the removal of hardship is a recognized principle in our religion.

In the case where the death toll is increasing rapidly to the point where we fear that the living will be harmed by the presence of unburied corpses, we can solve the difficulty posed by traditional burials by digging larger graves and performing mass burials, or by using alternative means to deal with the situation.

However, such a rapid rate of death being caused by this disease is not realistic at this time, nor is it expected to occur.

We should be careful not to neglect the rights of the deceased by allowing ourselves to be affected by the materialist mindset, which is a view that disregards what it considers to belong to the “metaphysical” realm and only concerns itself with the material benefit of living beings.

In reality, such a mindset destroys the essence of life because a life without purpose is a life of misery.

The preparation of the deceased and their burial is a communal obligation for which the community would bear the sin, if it is neglected. Imam Ash-Shafi`i said in his book Al-Umm,

“It is an obligation on the people to wash the deceased, perform the funeral prayer for them, and to bury them. It is not permissible for the community to neglect this obligation. However if a sufficient number of people took this responsibility upon themselves, the rest of the community become absolved of any sin.”

That is to be done even before covering the deceased’s debts, according to the Hanbali school of thought (though this is contrary to the view of the majority, who prioritize debts over burial costs).

If the estate is not large enough to cover the burial costs, the expense transfers to those who had the financial liability of spending on the deceased in his/her lifetime. The next in line to cover the burial expenses would be the Muslim Treasury, and if that is not an option, the responsibility falls on the community.

We would advise the Muslim community to work together in upholding the rights of their departed, specifically for those who do not leave behind an estate large enough to cover their funeral costs, nor are they survived by family members who uphold this responsibility for them (whether it is due to their inability or negligence).

Among the righteous actions we should be encouraging one another to do, is to purchase burial plots for those who cannot afford them. If the community is unable to bury the deceased in their own individual graves during this or any other pandemic, it becomes permissible to bury multiple corpses in one burial plot.

Burial in this country is normally done using caskets that can be placed side by side compactly, or placing them one above the other, in large burial plots that Muslims can purchase for themselves for this purpose.

Prophet Mohammad buried the martyrs of the battle of Uhud two—and sometimes three—at a time in one grave. And in the Maliki text, Al-Taj wal Ikleel, it states,

“If an atrocious calamity occurs, resulting in many casualties, there is no harm in burying the deceased without a full body washing (ghusl) if there is no one available to wash them. It also becomes permissible to bury multiple bodies in one grave.”

Another way to solve this dilemma (caused by insufficient funds) would be to transfer the bodies to a location where burial plots can be purchased for less money.

Imam Al-Qaffal and Imam Al-Razi have mentioned that some jurists permitted directing Zakah funds toward any righteous endeavor, and that would include funeral and burial costs.

However, the authorized view in the four schools of thought (madhahib) is that it is not permissible to use money collected from Zakah to cover the costs involved in preparing the deceased for burial. However, if the family of the deceased is poor, they may be given money from the Zakah to use in any matter they deem fit. 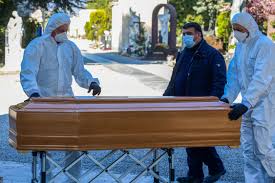 Third: Regarding cremation when done for preservation of life, as in the case where a widespread calamity results in a rapid rate of death to the point where there is an inability to bury all of the deceased and the presence of their unburied corpses poses a threat to the living, or in the case where medical professionals assert that cremating the bodies of those who died of a disease is imperative in order to preserve life (by warding off infection):

In these cases, cremation becomes permissible due to dire necessity. This is because even though the inviolability of the deceased is like that of the living (as understood by the hadith which compares breaking the bone of a corpse to breaking it while the person was alive), we still prioritize the welfare of the living over the rights of the deceased if we find ourselves in a situation where we have to choose one over the other, and that is because preserving life must take priority.

The intended message behind the above narration (concerning breaking the bones of a corpse) is to forbid mutilation, and not to imply that the rights of both the living and the dead are equal. Had the latter been the case, our scholars would not have agreed upon the fact that there is no qisas (equal retribution) against one who does (mutilate a corpse), nor would they owe any blood money for that.

In addition, Abu Bakr said to the Mother of the Believers, Aishah (may Allah be pleased with them both), “The living are more deserving of new (clothing) than the dead are.”

Our jurists have also mentioned, in their books discussing specific judicial matters, the existence of dire exigent circumstances which would permit, due to the dire need, cutting open the stomach of a corpse, whether male or female, and dissecting certain parts of the body.

So, we can use these cases mentioned in the books of jurisprudence, and deduce, by analogy, the permission to use such necessary concessions for our situation, if those needs were to arise.

Finally. We add that if the authorities in a particular country attempt to pass laws requiring the cremation of corpses, with the presence of other alternatives that would prevent the harming of the living, it would become an obligation upon the Muslims to work together with members of other faiths in an attempt to block such legislation from being passed into law. If they fail, then Allah does not burden a soul with more than what it can bear.