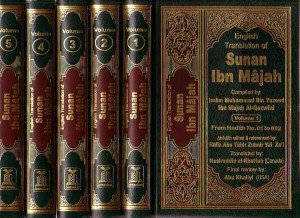 Ibn Majah was an eminent scholar and memorizer of hadith. He reminds us with his ancestor Salman Al-Farisi.

Almighty Allah has chosen some people to be the knowledge-torch bearers leading the Muslim community to the straight path and guiding its way in light of the instructions of Prophet Muhammad (peace be upon him). They are the religious scholars who devoted their life for teaching people the religion of God. They are the inheritors of Prophets and the most beloved ones to God the Almighty.

One of the leading figures of knowledge is the outstanding scholar of hadith Ibn Majah Abu `Abdullah Muhammad ibn Yazid ibn Majah Al-Rab`i Al-Qazwini. In the following lines, we will try to shed some light on the life of this great personality.

Ibn Majah was an eminent scholar and memorizer of hadith. He reminds us of his ancestor Salman Al-Farisi who was born in the Persian lands and he crossed through different places searching for the true religion. He abandoned the Magus beliefs and traveled to the Levant where he met Christian monks and adopted Christianity. Then, he was informed by one of the monks about the oncoming of the last Prophet (peace be upon him) who will appear in Arabia. Salman did not slacken and continued his way until he reached Madinah and waited there until the migration of Prophet Muhammad to follow Islam. Our scholar was a diligent seeker as well, but a seeker of the knowledge of hadith.

Abu `Abdullah ibn Majah was born in 209 AH in Qazwin (Qazvin, Iran) for a practicing family of knowledge. His home city was conquered during the Caliphate of `Uthman ibn `Affan (may Allah be pleased with him) in 24 AH and became a center of knowledge. It presented great religious scholars like Al-Hafizh `Ali ibn Muhammad At-Tanafisi, Al-Hafizh `Amr ibn Rafi` Al-Bajali and Isma`il ibn Tawbah.

Imam Ibn Majah was born during the Caliphate of Al-Ma’mun, whose rule witnessed a rising prosperity in all branches of knowledge. Ibn Majah rose up fond of knowledge, specially the religious sciences. He memorized the Qur’an and commenced seeking the religious sciences such as Fiqh, Hadith, Tafsir, etc. at an early age. He found in himself a special attachment to Hadith. He applied himself for narrating hadith and frequented the circles of hadith scholars in his home city, including the above mentioned scholars. His soul yearned for traveling for seeking knowledge, just as his ancestor Salman did, and as it was the custom of all seekers of hadith at that time. He made his first journey for seeking hadith at the age of 22.

After arduous journeys that took more than fifteen years, Ibn Majah returned back to his homeland where he was devoted for compilation and dissemination of knowledge. He stayed in his homeland teaching and narrating hadith to his students. He was frequented by masses of students who came from everywhere to learn at his hands and narrate hadith from him. Among his students were Muhammad As-Saffar, Is-Haq ibn Muhammad, Sulayman Al-Qazwini, Ibn Sibawayh, `Ali ibn Ibrahim Al-Qattan, `Ali ibn Sa`id Al-Ghaddani, Ibrahim ibn Dinar Al-Jarshi, `Ali ibn Ibrahim ibn Salamah, Ja`far ibn Idris and many others.

Imam Ibn Majah wrote numerous books topped by his well-known book of hadith As-Sunan. This book received high praise from the scholars of hadith for his special approach and the fact that it included authentic hadiths not found in the other books of Sunan or the Sahihs of Al-Bukhari and Muslim. He also compiled a great book in Tafsir, as mentioned, in Al-Bidayah wa An-Nihayah, but unfortunately it was lost. He also wrote a book of history that covered the era of the Prophet to his time. This book remained long after his demise, as stated by At-Tahir Al-Maqdisi and Ibn Khallikan but it was also lost.

After a lifetime full of learning, teaching and compiling books in hadith and other religious sciences, Imam Ibn Majah passed away in the 22th of Ramadan, 273 AH. May Allah confer His mercy upon Ibn Majah and reward him all the best for his scientific journey, circles of knowledge and useful compilations!

Al Bukhari: The Imam of Hadith and Sunnah