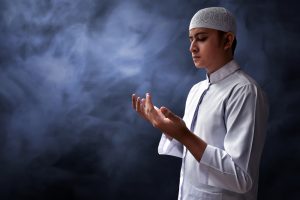 Why Do Muslims Fast?

The simple answer to this question is that Muslims fast because God (Allah) commands them to observe fasting. We read in the Quran:

Fasting constitutes the fourth pillar of Islam. The Prophet (peace be upon him) is reported have said:

“The superstructure of Islam is raised on five (pillars), testifying (the fact) that there is no god but Allah, that Muhammad is His bondsman and messenger, and the establishment of prayer, payment of Zakah, the fast of Ramadan and Pilgrimage to the House (Kabah) ” (Muslim)

What Do Muslim Gain from Fasting?

The more important question to be asked is: What do Muslim gain from fasting?

The answer to this question is given in this Quranic verse which talks about the obligation of fasting:

The verses that follow this verse focus on some rulings pertaining to fasting. The last verse in this context ends with the words:

Thus does Allah make clear His ordinances to the people that they may become righteous. (Quran 2:187)

In Ramadan, Muslims abstain from lawful food and drinks, sexual intercourse from dawn to sunset willingly and this trains them how to control their desires and monitor their actions.

During fasting, Muslims feel so much spirituality. Muslims monitor their tongue, hands, and eyes. They begin to think of everything they do whether it is lawful or unlawful. Muslims keep away from any company that is involved in backbiting or slandering.

While fasting, Muslims are genuinely conscious of God.

When a Muslim is abused or insulted, he is urged by the Prophet to fight back by saying: “I am fasting, I am fasting.”

Fearing God or being mindful or conscious of God was God’s command to all previous nations especially the People of the Book. We read in the Quran what means:

God commands the believers to fear Him until their last breath. We read in the Quran:

You who believe, be mindful of God, as is His due, and make sure you devote yourselves to Him, to your dying moment. (Quran 3:102)

What Are the Virtues of Taqwa?

Piety is defined in the Quran as the best provision of the believers.

Provide well for yourselves: the best provision is to be mindful of God- always be mindful of Me, you who have understanding. (Quran 2:197)

To have the feeling that when you are mindful of God he loves you suffices for everyone to enjoy this characteristics.  We read in the Quran:

God loves those who keep their pledges and are mindful of Him. (Quran 3:76)

Ibn Kathir (a Muslim scholar known for his best work on interpreting the Quran) says:

Ibn Masud (one of the Prophet’s companions) defined taqwa as:

“Fearing Allah, practicing according to the Quran and Hadith, being content with little, and preparing for the Day of Judgement.”

How Muslims Attain Taqwa in Fasting?

Muslims during the month of Ramadan offer the obligatory fasting and they are very keen to perform the five daily prayers in congregation in the mosques. They offer extra prayer called tarawih. They also give in charity to the poor and the needy. They visit relatives and family members. This is what you can see and notice when you visit any Muslim country.

Every individual Muslim has a way of doing a good deed that is known only to Allah and those around him do not know about it. This is called the secret act of worship.

Muslims believe that fasting is not about refraining from food, drink and sex only. The concept of fasting goes beyond that to include avoiding all bad deeds. That is why Muslims avoid all foul speeches, gossip, backbiting and slandering.

All the good deeds that Muslims do help them attain taqwa and grain its fruits both in the world and the life to come.

The Prophet said, “If one does not avoid lies and false conduct, Allah has no need that he should abstain from his food and his drink.” (Al-Bukhari)