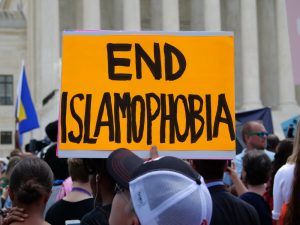 To feel sad about the insults and the abuse against Muslims is normal.

We read in the Quran, which Muslims believe to be the word of Allah, what means:

We know that you, [O Muhammad], are saddened by what they say. And indeed, they do not call you untruthful, but it is the verses of Allah that the wrongdoers reject. (Al-An`am 6:33)

While the Prophet (peace be upon him) was still in Makkah, he and his companions were persecuted harshly and abused verbally and physically.

In this verse, God (Allah) tells the Prophet that it was normal from him to feed sad because of what the people of Makkah said to him or did wrong with him and his companions.

God tells the Prophet to be sure that it is not just about him the things they were doing; rather it is about the revelation from Him that they rejected.

Therefore, what the people of Quraish did with the Prophet was the first incident of Islamophobia in the Muslim history.

To feel sad about the insults and the abuse against Muslims is normal. Muslims are humans. When Muslims are insulted or abused, they feel embarrassed. What is more important is how to respond to such incidents of abuse and insult.

In the following verses, the Prophet was taught how to deal with Islamophobia.

We read in the Quran what means:

And We already know that your breast is constrained by what they say. So exalt [ Allah ] with praise of your Lord and be of those who prostrate [to Him]. And worship your Lord until there comes to you the certainty (death). (Al-Hijr 15:97-99)

The verses tells us that the Prophet felt sad about what was done against him and his companions. Then Allah tells the Prophet to do the following things to react properly to incident of islamophobia:

1- To praise Allah and do a lot of dhikr (remembrance of Allah) and duaa (supplication to Allah).

2- To fall doing in prostration which is an essential prat of the prayer. So, the five daily prayer and optional prayers are an ideal course of reaction to Islamophobia.

3- To worship Allah continuously until the end of his life.

Islamophobia: How to Deal with It as a Muslim

A Message to Christchurch Mosque Perpetrator

How Should Muslims Respond to Christchurch Mosque Attack?

If you have a question about Islam and Muslims, please feel free to have a one-to-one live chat with us:the-faith.com/…/the-e-dawah-committee-edc-condemns-christchurch-mosque-shootings