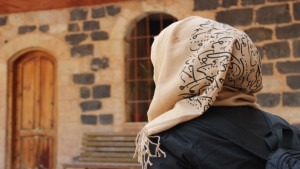 Hijab was made incumbent by all divine messages, including Judaism, Christianity and Islam

As a matter of fact, the desire for woman as a female is one of the desires which man naturally craves for a divine rationale, which is the perpetuation of mankind and their preservation from extinction. There must be some impulse which man cannot resist so that he will live with woman and beget offspring from her. God has rendered the desire for women one of the most burning desires alluring men. In the Qur’an, God says:

Beautified for people is the love of that which they desire – of women and sons, heaped-up sums of gold and silver, fine branded horses, and cattle and tilled land. That is the enjoyment of worldly life, but Allah has with Him the best return. (Aal `Imran 3:14)

Prophet Muhammad (peace be upon him) said: “I have not left after me any temptation to men which is stronger than women.” (Al-Bukhari and Muslim)

Indeed, such sexual desire is something which is indicative of God’s mercy towards His servants. Were it not for it, a husband would not have shouldered any responsibility for his wife and would not have endured hardships to provide for her as well as her children. In the Qur’an, God says:

And of His signs is that He created for you from yourselves mates that you may find tranquility in them; and He placed between you affection and mercy. Indeed in that are signs for a people who give thought. (Ar-Rum 30:21)

Since the desire for women is something which men cannot resist easily, God has imposed strict regulations in His successive divine messages to make sure that such a desire will play its legitimate role in the human life and will not be got out of the lawful context in which it was essentially placed, given the fact that the satisfaction of such a desire outside its legitimate framework has considerable disadvantages and enormous damage threatening man’s happiness as they ruin his life and lose him the Hereafter.

One of such strict regulations is the imposition of hijab on women. That is to say, women are commanded to conceal their attractive parts whose charm cannot be resisted by men and only allowed to expose such outer parts of the body which do not cause much temptation and have such humanly reasonable adornment which is quite far away from such finery which involves deliberate display of woman’s beauty and intentional arousal of men’s desires.

In this sense, hijab was made incumbent in all divine messages, including Judaism, Christianity and Islam. No wonder, the female believers in any of the divine messages used to wear hijab.

Here is the Old Testament telling us that women used to wear the hijab (or the veil) and praising those decent women. In the Old Testament, we read the following verses: “Rebekah also looked up and saw Isaac. She got down from her camel and asked the servant, ‘Who is that man in the field coming to meet us?’ ‘He is my master,’ the servant answered. So she took her veil and covered herself.” (Genesis 24:64-65)

In the Old Testament, we also read: “Take millstones and grind flour; take off your veil. Lift up your skirts” (Isaiah 47:2), “How beautiful you are, my darling! Oh, how beautiful! Your eyes behind your veil are doves.” (Song of Songs 4:1), “Now Susanna was exceeding delicate, and beautiful to behold. But those wicked men commanded that her face should be uncovered, (for she was covered,) that so at least they might be satisfied with her beauty.” (Daniel 13:31-32)

This is the New Testament commanding women to wear hijab (or the veil) and warning them against unveiling and uncovering themselves. In the New Testament, we read: “But every woman who prays or prophesies with her head uncovered dishonors her head—it is the same as having her head shaved. For if a woman does not cover her head, she might as well have her hair cut off; but if it is a disgrace for a woman to have her hair cut off or her head shaved, then she should cover her head.” (1 Corinthians 11:5-6)

The New Testament also commands women to dress modestly and be characterized by decency and propriety and prohibits them from finery and from uncovering or unveiling themselves. We read: “I also want the women to dress modestly, with decency and propriety, adorning themselves, not with elaborate hairstyles or gold or pearls or expensive clothes.” (1 Timothy 2:9)

Being the final divine message, Islam has not introduced novel teachings. Rather, the teachings of Islam came as an extension of the previous divine messages. Therefore, Islam also commands women to be modest and decent and avoid finery and unveiling or uncovering themselves. In the Qur’an, we read:

And abide in your houses and do not display yourselves as [was] the display of the former times of ignorance. And establish prayer and give zakah and obey Allah and His Messenger. Allah intends only to remove from you the impurity [of sin], O people of the [Prophet’s] household, and to purify you with [extensive] purification. (Al-Ahzab 33:33)

The Qur’an accounts for the command to wear hijab, indicating that it is intended for protecting women from any potential harm to which they may be vulnerable if men happen to perceive their beauty and finery. We read:

O Prophet, tell your wives and your daughters and the women of the believers to bring down over themselves [part] of their outer garments. That is more suitable that they will be known and not be abused. And ever is Allah Forgiving and Merciful. (Al-Ahzab 33:59)

Prophet Muhammad confirmed women’s obligation to wear the hijab. He said: “O Asma’, when a woman reaches the age of menstruation, it does not suit her that she displays her parts of body except this and this.” He pointed to his face and hands. (Abu Dawud)

The obligation to wear hijab is more stressed upon offering prayers. Prophet Muhammad said: “The prayers of a woman who has reached the age of menstruation is not accepted without a khimar (veil).” (Recorded by the five compilers except Al-Nasa’i)

Finally, the obligation of the hijab is better proven by the fact that devout, godly and pious women believing in all divine messages wear it, be they religious Jewish women, Christian nuns or strict Muslim women.

Your Illustrated Guide to Hijab in the Modern Western History