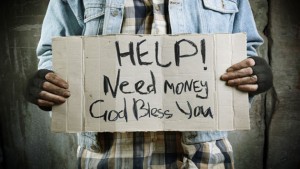 All divine religions order helping and lending the poor without interest

In fact, all divine religions order helping and lending the poor without interest. They also prohibit ignoring and turning one’s back on them. Alms should be given to them even if possessions should be sold.

In the Old Testament, we read the following verse: “If there is a poor man among you, one of your brothers, in any of the towns of the land which the Lord your God is giving you, you shall not harden your heart, nor close your hand to your poor brother; but you shall freely open your hand to him, and generously lend him sufficient for his need in whatever he lacks.” (Deut. 15:7)

The New Testament enjoins sharing clothes and provisions with the poor. We read the following verse: “And [John the Baptist] would answer and say to them, “Let the man with two tunics share with him who has none, and let him who has food do likewise.” (Luke 3:11)

The Qur’an considers giving money to the needy an act of righteousness. We read the following verse:

Righteousness is not that you turn your faces toward the east or the west, but [true] righteousness is [in] one who believes in Allah, the Last Day, the angels, the Book, and the prophets and gives wealth, in spite of love for it, to relatives, orphans, the needy… (Al-Baqarah 2:177)

The Qur’an urges heirs to give the needy from the estate of their deceased. We read the following verse:

And when [other] relatives and orphans and the needy are present at the [time of] division, then provide for them [something] out of the estate and speak to them words of appropriate kindness. (An-Nisaa’ 4:8)

Again, the Qur’an orders doing good to the needy. We read the following verse:

Worship Allah and associate nothing with Him, and to parents do good, and to relatives, orphans, the needy… (An-Nisaa’ 4-36)

Prophet Muhammad (peace be upon him) instructed his Companion Mu`az to take alms from the rich and give it to the poor.

Prophet Muhammad (peace be upon him) likened the one who looks after a poor person to a warrior fighting in the cause of Allah or the one who observes prayer at night and fast at day. Abu Hurairah narrated that the Prophet (peace be upon him) said: “The one who looks after a widow or a poor person is like a Mujahid (warrior) who fights in the cause of Allah or like him who performs prayers all the night and fasts all the day.” (Al-Bukhari)