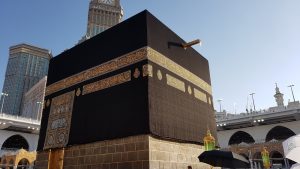 Hajj is one of the best deeds that a Muslim can do to get closer to Allah.

No Other Reward Than Paradise

Hajj is the fifth pillar of Islam. Muslims believe that hajj purifies their souls. Hajj signifies the unity of the Muslim ummah. All the actions of hajj represent the Oneness of God from start to finish.

The financial and physicality ability is the main condition of hajj. We read in the Quran what means:

In it are clear signs [such as] the standing place of Abraham. And whoever enters it shall be safe. And [due] to Allah from the people is a pilgrimage to the House – for whoever is able to find thereto a way. But whoever disbelieves – then indeed, Allah is free from need of the worlds. (Quran 3:97)

Muslims believe that hajj is one of the best deeds that a Muslim can do to get closer to Allah.

Lady Aishah (the Prophet’s wife, may Allah be pleased) reported that she said, “O Allah’s Messenger! We consider Jihad as the best deed. Should we not fight in Allah’s Cause?” He said, “The best Jihad (for women) is Hajj-Mabrur (i.e. Hajj which is done according to the Prophet’s tradition and is accepted by Allah). (Al-Bukhari)

In another version, Aishah added: Ever since I heard that from Allah’s Messenger I have determined not to miss hajj.

Muslims believe that there is a great reward for hajj as told in the Sunnah of the Prophet Muhammad (peace be upon him).

Abu Hurairah (Allah be pleased with him) reported Allah’s Messenger as saying:

“An Umrah is an expiation for the sins committed between it and the next, and Hajj which is accepted will receive no other reward than Paradise.” (Al-Bukhari)

Muslims believe that hajj is a reason for forgiving one’s sins. Abu Hurairah narrated that the Prophet said,

“Whoever performs Hajj for Allah’s pleasure and does not have sexual relations with his wife, and does not do evil or sins then he will return (after Hajj free from all sins) as if he were born anew.” (Al-Bukhari)

Every Muslim should hasten to perform hajj as long as he is financially and physically able to do that. It is reported that the Prophet said: ‘Whoever intends to perform Hajj, let him hasten to do so, for he may fall sick, lose his mount, or be faced with some need.’” (Ibn Majah)