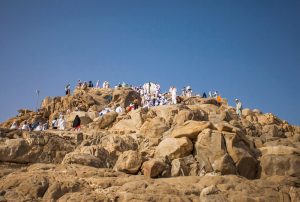 Muslims believe that the reward of hajj is a free ticket to Paradise.

Muslims who had the financial and physical ability to perform the obligation of hajj (pilgrimage to Makkah) started to go home after completing all the rituals.

Muslims believe that hajj is the noblest spiritual journey. It is a journey of discovering oneself and a chance to thank God for his countless bounties.

In hajj, Muslim follow the footsteps of Prophet Ibrahim and his wife Lady Hajar and remember the sacrifices they offered in compliance with God’s commandments.

When God gave the orders to Prophet Ibrahim to call people to perform hajj, He mentioned the reasons for this invitation. We read in the Quran what means:

That they may witness benefits for themselves and mention the name of Allah on known days over what He has provided for them of [sacrificial] animals. So eat of them and feed the miserable and poor. (Al-Hajj 22:27-28)

Therefore, hajj is all about benefits for those who perform it.

Muslims believe that the reward of hajj is a free ticket to Paradise. The Prophet Muhammad (peace be upon him) is reported to have said:

“An Umrah is an expiation for the sins committed between it and the next, and Hajj which is accepted will receive no other reward than Paradise.” (Al-Bukhari)

Based on this, Muslim pilgrims return from hajj sinless like newly-born babies.

The question is how to maintain this state of purity?

In what follows, I propose some ideas to answer this question.

Hajj is a golden opportunity to get one closer to God and remain connected to Him. In the Quran we read what means:

And when you have completed your rites, remember Allah like your [previous] remembrance of your fathers or with [much] greater remembrance. And among the people is he who says, “Our Lord, give us in this world,” and he will have in the Hereafter no share.

This is a clear command for those who completed the rites of hajj to remember God and make a lot of supplications to Him.

There are two types of people. First, those who do not care for the Hereafter and thus when they make supplications to God they ask Him to give them of his bounties in this short life only. They will be surprised in the Hereafter that they have nothing left for them.

After hajj, a pilgrim must thank God for making this journey easy for him by facilitating all possible means to complete it.

After hajj, a pilgrim must change himself for the better. In hajj, pilgrims followed the ritual of the Prophet (peace be upon him) in compliance with the hadith “Take your rituals from me.”

So, a pilgrim must continue following the way of the Prophet in all aspects of life, in his dealing with people, the family, the neighbors, the spouse, the children, etc.

Every pilgrim should make this verse his slogan in this life:

Before hajj, all pilgrims were very keen to have lawful financial resources to complete this journey. This care for having legal and lawful sources of income and living should continue after returning from hajj.

Before hajj, pilgrims asked people to forgive them for the mistakes they made with them.

This behavior of seeking people’s forgiveness should continue after returning from hajj. Pilgrims should have a firm stance not to commit sins again after all their previous sins have been wiped out during hajj.