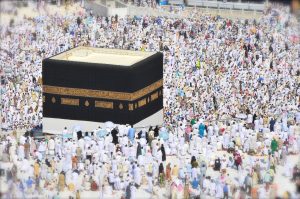 Hajj and Zakah (obligatory charity) are the two social pillars of the religion.

Hajj as a Conference Legislated by Allah

When Muslims sight the crescent of the month of Dhul-Hijjah, they leave for the House of Allah from every distant place and remote country.

They come on foot, riding camels, by ships and planes in order to witness the divine Islamic conference that Allah has prescribed witnessing once in one’s life in order to bring hearts together for His sake, fraternize among people who are upon the truth, and strengthen people’s relations every year through kindness and solidarity. It revives hope and determination. It unites the various complaints of the people stricken by material politics, an automated civilization and colonial aspirations. They chant their complaints in one supplication that is echoed in the desert and the sky.

Muslims today badly need to witness this conference as the colonialists have long confined them in their extorted lands and cut relations and communications among them and separated them from their inspiring past and promising future through obliterating their history, destroying their language, and extinguishing the torch of religion. Muslims have had no opportunity to gather except in the Hajj season if they could. However, there have been overt and covert schemes that resulted in Hajj not culminating in the wisdom that is intended behind the Hajj and thus many Muslims did not obtain the expected benefit from Hajj.

This was the case when Muslims were disunited, disagreeing, and under foreign occupation. Now that the colonial powers and invaders have been evacuated and Muslims have assumed the reigns of the Arab countries, only geographic and political lines separate Muslims in the east and west of the Arab lands without separating their hearts, hands, tongues, or brotherhood. These borders do not impede them from meeting in Makkah to mention the name of Allah The Exalted in known days. They thank Allah for His favors upon them including Islam, faith, answering the supplication of Ibrahim (Abraham), may Allah exalt his mention, ransoming Isma`il (Ishmael), may Allah exalt his mention, and the Prophethood of Muhammad (may Allah exalt his mention), the final Messenger of Allah.

Fraternity and equality are mottos of Islam, the rule of peace, the head of freedom, the meaning of true civilization and the spirit of sound egalitarianism.

Hajj was and still is the purifier of worldly life by clearing it from the fetters of desires and the filth of materialism.

Hajj was and still is the spring of safety that cools down exhausted nerves and hearts.

Hajj was and still is the place of security where souls feel at ease in the land of revelation, where the conscience becomes tranquil in the birthplace of creed and where feelings delight in the divine blessings of this heavenly land.

Hajj was and still is the meeting for Muslims from all over the world at `Arafah, sincerely loving each other, equally standing before Allah with a modest appearance and humble souls, and raising hands invocating Allah with similar words. Their supplications rise like incense and perfume. Muslims stand in this worldly gathering where the Prophet, his Companions, Muslim kings and princes and millions of pilgrims from different places speaking in different languages stood. Muslims commemorate this event with Dhikr (mentioning Allah) and reflecting on how the religion, in a certain age, was revealed in this land, and how the heavens here made contact with the earth, and how in this arid desert grew gardens and fruits – in the east and the west.

Each spot in the land of Hijaz has a quality for sacrifice and heroism. Hajj to this land is an inspiration of pride, a motivation to dignity, an urging of liberty and a reminder of unity. There is the Cave of Hiraa’, the first place where revelation descended; there is the House of Al-Arqam, which is a symbol of sacrifice; The Cave of Thawr, which is the rise of glory; and there is the house where Abu Bakr, `Umar, `Ali, `Amr, Sa`d and Khalid, may Allah be pleased with them, were sitting. Then there is Bat’haa’, whose sands had the footprints of world leaders and the guiding lamps of humanity.

Allah The Almighty Says (what means): {And [due] to Allah from the people is a pilgrimage to the House – for whoever is able to find thereto a way.} [Aal `Imran 3:97] Nowadays, a lot of people meet the conditions of ability due to welfare and security. You can perform Hajj with a small amount of money in a short time by car, ship or plane without jeopardizing your life, wealth or health.

Due to the extreme hardships of Hajj in the past, it was almost confined to the labor class of farmers and artisans and the opulent and gentle people of authority did not think about it. So, the benefit of Hajj was seen as slight and did not exceed the limits of performing rituals.

But what prevents the Arab and Muslim leaders now from setting an appointment to meet at Hajj in order to achieve the goal of Hajj where they could sincerely discuss worldly and religious affairs and common causes?

Were they to perform Hajj year after year, they would raise the status of the religion, encourage people to perform this obligatory act of worship, and unite the Muslim word. The Ancient House, from which light spread and from whose heaven revelation came down, is still a beacon of light for the Ummah (Muslim nation) and the place from which its glorious and joyous future will rise!