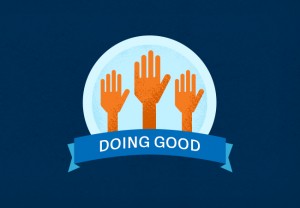 Allah has shown goodness to us by bringing us into existence from nothingness and then conferring upon us our human dignity.

In this verse, the goodly reward is Paradise and what is more is the pleasure that the denizens of Paradise will have in gazing upon the countenance of the Lord. (Muslim)

Though the wording “the Giver of Good” does not appear in the Qur’an as a name, its meaning appears as a description of Allah’s Actions. For instance, Allah says, relating the words of Joseph (peace be upon him):

He has indeed been good to me when He took me out of prison and brought you all here out of the desert. (Yusuf 12:100)

Allah has shown goodness to us by bringing us into existence from nothingness and then conferring upon us our human dignity. Allah says:

Had there not been a time when the human being was not a thing to be mentioned?” (Al-Insan 76:1)

Allah has shown goodness to us by creating humanity in the best of forms:

It is Allah Who has made for you the earth as a resting place, and the sky as a canopy, and has given you shape, and made your shapes beautiful, and has provided for you sustenance, of things pure and good. Such is Allah, your Lord. So glory be to Allah, the Lord of the Worlds! (Ghafir 40:64)

Furthermore, He has blessed us with the faculty of reason which sets us apart from other creatures. Allah says:

We have shown him the way, whether he be grateful or disbelieving. (Al-Insan 76:3)

Allah brought you forth from the wombs of your mothers knowing nothing, and gave you hearing and sight and hearts that perhaps you might give thanks. (An-Nahl 16:78)

Allah has given humanity the greatest good in guiding them to Islam and in preserving the Qur’an from loss and corruption. Allah says:

Ibn `Abbas, the Prophet’s eminent Companion, said that this verse refers to the Qur’an.

It is from Allah’s goodness to humanity that He has made the Earth an abode for them, made them its masters, and provided for them all manner of good things.

As Allah is the Giver of Good, He loves for us to exhibit goodness. Allah says: “Allah does not waste the reward of those who do good. (At-Tawbah 9:120)

He it is who created death and life to try you as to which of you will be best in deeds. (Al-Mulk 67:2)

This verse shows us that we are not being judged simply by the amount of deeds that we do. What matters most is the goodness of those deeds.