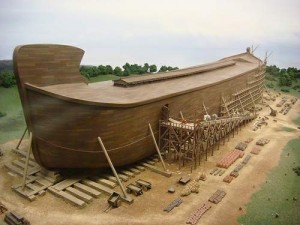 Malik said, “Sunnah is the Ark of Noah, whoever get aboard it will be saved and whoever misses it will be sunk.”

Allah sent Noah (peace be upon him) to lead people back to the religion of God, upon which was their father Adam (peace be upon him). However, they refused to respond to his advice and continued in their transgression and arrogance. Noah treated them kindly and called them on every occasion, in night and day, and in secret and open. Almighty Allah says,

Noah said, “My Lord, indeed I invited my people [to truth] night and day. But my invitation increased them not except in flight. And indeed, every time I invited them that You may forgive them, they put their fingers in their ears, covered themselves with their garments, persisted, and were arrogant with [great] arrogance. Then I invited them publicly. Then I announced to them and [also] confided to them secretly. (Nuh 71:5-9)

Almighty Allah told Noah that his people would not accept his call anymore and none of them would believe in him. Allah commanded him to build a ship so that he and the believers could ride in it because all he disbelievers would be drowned. Allah commanded Noah to take onto the ship one pair, male and female, of every living creature and animal, so that they might continue to survive. Allah helped Noah and those who believed with him, and destroyed those who disbelieved, and made them a lesson for mankind.

The Ark of Noah was the shelter that protected those who resorted to it while the others were sunk. It was a real refuge for them and kept them in safe amongst the surging floods.

Do you know that the Ark of Noah is at your hands, even if you do not know so?

–          If you find yourself overtaken by sins and the Satan has captured you, hurriedly resort to the ship of the righteous, repent to Allah (Glory be to Him) and keep to the way of guidance and you will be on the ark.

–          If you find yourself perplexed and confused, go back to the Qur’an, the glorious book of God, and it will deliver you to the safe shores of certainty and faith.

–          If you find yourself alienated and the sense of loneliness killing you, resort to the Sirah (biography) of the Prophet Muhammad (peace be upon him) and his companions and you be filled with sense of companionship.

–          If you are in a state of chaos, overloaded by the burdens and concerns of life, embark on the greatest ship of serenity and relaxation, Salah about which the Prophet (peace be upon him) used to say, “Let us be relaxed with it (i.e. Salah) O Bilal”

–          If you find yourself lifeless and anxious, and your heart is trembling, turn to the boat of Zikr (remembrance) of Allah as Salah Almighty Allah says,

–          If you are straying purposeless and found that you has lost your compass, stick to supplication of Allah that He guides you to the rightest direction and soundest choice.

–          If find yourself surrounded by Bid`ahs and groundless religious rituals, resort to Sunnah as Imam Malik said, “Sunnah is the Ark of Noah, whoever get aboard it will be saved and whoever misses it will be sunk.”

–          If you lose hope and get disappointed, do not lose hope of God because the believers always have trust in their God. Listen to Ya`qub (Jacob) when his sons returned to him frustrated without bringing Yusuf (Joseph); his lost son, back to him. He said to them