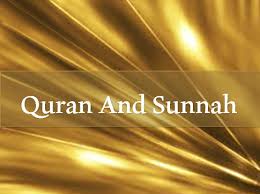 Muslims believe that the authentic Sunnah is the second source of Islam after the Qur’an.

From time to time, there arise claims calling for rejecting the Sunnah and following the Qur’an alone as a sole fundamental source for the religion of Islam, a call not guiltless of bad intention or a hidden agenda. If we agree to reject the Sunnah and follow the Qur’an alone, we are then abolishing a tremendous amount of laws of Islam with their details and religious ethics called for by the never doubtful act of the Prophet and his frequent practice. To refute such destructive calls, we may just mention here what Muslims have unanimously agreed upon, from the time of the prophet up till today and even up till the Doomsday, that the Islamic religion is based on two main fundamental sources; i.e. the Qur’an and the Sunnah.

The Fundamental Sources of Islam

Muslims believe that the Qur’an is the fundamental source of the faith of Islam and Shari`ah, as well as of its morals and values, and concepts and standards. It is an infallible source, to which falsehood does not come from before it or from behind it …. the origin of all origins and the source of all sources, since other sources are documented by it; we even deduce the authoritativeness of the Sunnah by the Qur’an.

There is no such devout Muslim who may challenge the proven and documented full text of the Qur’an, and the fact that it is free from distortion whether by deletion or addition, or question its authoritative nature. No Muslim, whatever the group he may belong to; Sunnis or others, may breach that.

Although Arabic is the language of the Qur’an, it was revealed by Allah to be universal both in content and attitude, as Allah says, “Blessed is He who has sent down the Criterion to His worshiper (Prophet Muhammad), that he is a warner to all mankind.” (Al-Furqan 25: 1). So Muslims must interpret its meaning to the different languages of the world, until they deliver the message of Allah to people, establish the proof against them, be discharged from liability for negligence and prove the globalization of the Islamic call.

Muslims believe that the authentic Sunnah is the second source of Islam after the Qur’an. It reached us by reliable means through the Companions and the Prophet’s honourable family members, May Allah be pleased with them all. Allah has delegated His Messenger the task of explaining the Qur’an to people “… And We sent down to you the Remembrance so that you can make clear to people what has been sent down to them…” (Al-Nahl 16:44). The Qur’an is the divine guidance for the worlds, while the Sunnah provides people with a demonstration of the Prophet’s words, actions or acknowledgements. It explains what has been outlined by the Qur’an, limits what has been generalized or restricts what has been allowed. Allah has ordered to obey His Messenger as he (the Prophet) does not speak out of desire; his obedience is from the obedience to God, as Allah says, “Whosoever obeys the Messenger, indeed he has obeyed Allah. …” (Al-Nisa’ 4: 80) and therefore He joined between obedience to His Messenger and obedience to Himself, and made them the way to Allah’s guidance and love, Allah says, “Say: Obey Allah and obey the Messenger … and if you obey him, so you are guided …” (Al-Nur 24: 54), and “Say (Prophet Muhammad): ‘If you love Allah, follow me and Allah will love you, and forgive your sins. Allah is Forgiving and Merciful. “(Al `Imran 3:31)

The Qur’an cannot be comprehensively understood without the Sunnah, whether it was verbal Sunnah, which represents most of the Sunnah, or action Sunnah, such as Sunan contained in the demonstration of the five daily prayers, and in showing the rituals of Hajj. They are action Sunnah proved by undoubtful frequency.

It is important to understand both sources (Qur’an and Sunnah) in the framework of the Arabic language in which the Qur’an was revealed and the hadiths were mentioned, and according to the rules originated by the trustworthy scholars, especially scholars of jurisprudence.

To conclude, we may say that the best answer to those is that the source of all of the Ever-Glorious Qur’an and the Sunnah is only one; the divine revelation and that the Prophet did not come with something from him, “nor does he speak out of desire. Indeed it is not except a Revelation which is revealed, taught by One who is Stern in power. “(Al-Najm 53: 3-5)
————–