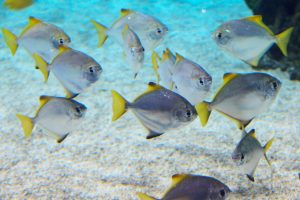 It is the special structure of the backbone and muscles of the fish that provide it such power.

How Do Fish Live in Water?

You must have seen how fast and brisk fish are in water. In order to swim, a fish does not need to make any movement other than to flap its tail from side to side. This ease of movement that fish have in water is a result of their flexible backbones as well as some systems in their bodies.

A fish expends a large amount of energy while swimming. This is not because it swims fast for long times. Fish need considerable amounts of energy in order to reach high speeds from being stationary. It is vital for a fish to gain speed instantaneously because it needs to do so in order to escape from predators.

Moreover, fish move against the current most of the time. Consider how hard it is for you to move in water and how easy it is to move while you are walking on the street. Compare living underwater and living on the face of earth.

It is the special structure of the backbone and muscles of the fish that provide it such power. The backbone keeps the body straight and is connected to the fins and muscles. Otherwise, it would not be possible for the fish to move in the water. However, the particular shape of its backbone is not sufficient to enable it to swim. That is because fish not only move forward and backward, but also up and down in order to survive. This movement is made possible by another system in their bodies; air sacs. By emptying these sacs of air, fish can sink to the bottom of the sea, and by filling the sacs with air they can rise to the surface again.

Fish are never damaged in water: Why?

Have you ever wondered how it is that fish are not damaged at all although they are always in the water? Our skin becomes affected if we stay in water for a while; if we stay for a longer time then it suffers injury. But this never happens to a fish. This is a result of a stiff bright layer in its outer skin. This layer prevents water from entering its body. If fish did not have this layer, their bodies would be damaged, and since water would enter the body the balance inside would be disturbed and they would eventually die. However, these things do not happen and all fish continue to live their underwater lives.

All fish species in the world possess these features. Species that lived long ago possessed them, too. Fish have had the same perfect structure for millions of years and have not gone through any change. It is possible to see this in the remnants of fish that lived millions of years ago. These remnants, namely fossils, clearly reveal that fish were the same as they are today and have not changed at all. This is evidence that fish came into existence at one point in time. In other words, they were created. It is Allah Who gave fish all the features they have and Who created everything in the universe. He knows the needs of all creatures.

“He [Allah] hath created the heavens without supports that ye can see, and hath cast into the earth firm hills, so that it quake not with you; and He hath dispersed therein all kinds of beasts. And We send down water from the sky and We cause (plants) of every goodly kind to grow therein. This is the Creation of Allah. Now show me that which those (ye worship) beside Him have created. Nay, but the wrong doers are in error manifest!” (Luqman 31: 10-11)

“We shall show them Our portents on the horizons and within themselves until it will be manifest unto them that it is the Truth. Doth not thy Lord suffice, since He is Witness over all things? How! Are they still in doubt about the meeting with their Lord? Lo! Is not He surrounding all things?” (Fussilat 41: 53-54)