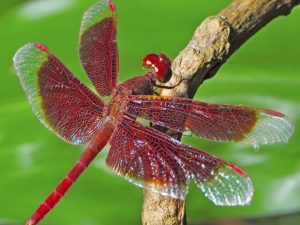 Sikorsky helicopters were produced in today’s technology by taking this particular form of the wings of the dragonfly as a model.

It is possible to see dragonflies in many places where water exists. If you know this insect, you might have already seen that it moves very fast and that it can make very sudden and sharp maneuvers. Nevertheless, for those who are not familiar with it, let us have a look at this insect.

The appearance of a dragonfly resembles a helicopter. This insect has such a perfect talent for flight that regardless of the speed and direction it is flying in, it can suddenly stop and fly in just the opposite direction, to such an extent that it may remain suspended in the air and wait in the proper position to attack its prey. This is by means of its wings, which it can flap very fast. When it is in this position, it can make a swift turn and head towards its prey. In fact, these are merely a few facets of its maneuverability that have been sources of inspiration for mankind in the construction of helicopters that are the products of today’s advanced technology.

The body of a dragonfly has a ringed structure that gives the impression of its being covered with metal. A dragonfly, whose color may vary from ice blue to claret red, has two pairs of wings on its back, one at the front and the other at the rear. While flying, the two front wings move up as the two rear wings move down.

Sikorsky helicopters were produced in today’s technology by taking this particular form of the wings of the dragonfly as a model. First, the picture of a dragonfly was loaded onto a computer. Considering the dragonfly’s maneuvers in the air, 2,000 special drawings were made. At the end of this study, Sikorsky came up with its new and very strong model with its advanced mobility, meant for transporting soldiers and supplies.

Have you ever noticed a dragonfly’s eyes? Dragonflies have perfect vision. The eyes of the dragonfly are considered the best insect eyes by scientists. A dragonfly has a pair of eyes, each one of which contains about 30,000 lenses. These eyes, which look like two hemispheres and cover half of the insect’s head, provide a broad field of view. Consequently, even its back is virtually within the dragonfly’s range of vision.

These are merely a few of the features of dragonflies, described very briefly. Suppose that any one of these features of the dragonfly say the particular type of wings, did not exist. Could this insect then make sudden maneuvers and catch its prey? On the other hand, if it did not have eyes that enabled it to see in every direction, could it manage to escape from its enemies?

The absence of any of the systems that a dragonfly possesses will give rise to a dysfunction of other systems. Yet, the dragonfly was created completely with all of its systems. Allah created the dragonfly perfect, like all other creatures, and it is thanks to Allah’s creation that this insect lives at ease.