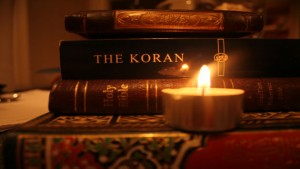 The crucifixion of Jesus is one of the central incidents on which various beliefs are based in the three divine faiths. Being his executors, the followers of Judaism believe that Jesus was actually crucified. Modern or rabbinic Judaism is a product of those very Pharisees whom Christ excoriated, and who ultimately had Him crucified. The Authoritative Jewish Encyclopedia explains:

“The Jewish religion as it is today traces its descent without a break through all the centuries from the Pharisees. Their leading ideas and methods found expression in a literature of enormous extent, of which a great deal is still in existence… The Talmud is the largest and most important single piece of that literature…”

If a Jewish child is born into an Orthodox Jewish family, he innocently enters a religious system entirely obedient to those who masterminded the crucifixion of Jesus. The Pharisees and their vast, rambling “anti-bible”, the Talmud, possess greater authority for religious Jews than does the Old Testament. As the Universal Jewish Encyclopedia confirms, “Thus the ultimate authority for Orthodoxy is the Babylonian Talmud. The Bible itself ranks second to it in reality, if not in theory.”

The Talmud says that Jesus seduced and deceived people. Git.56b-57a. He was a bastard, his mother Mary being a whore. San.106b. He practiced sorcery and enticed His race to apostasy. San.43a. He was a fool. San.67a. He was stoned, burned, decapitated and strangled in His death. San. 106b, Git.57a. He was excommunicated for the thought of seducing a woman and in His shame fell down and worshipped a brick. San.107b. He is now in hell, languishing in boiling hot semen. Git.56a.

The Talmud is emphatic that it was necessary to kill Jesus because He was “one of the three worst enemies of Judaism.” Git.56a. He was a false prophet who seduced and deceived the people. Git.56b-57a.

However, Abraham Foxmann, of the Anti-Defamation League, recently pronounced that acceptance of the New Testament record that the Jews had Christ killed is “anti-Semitic.” The ADL urges Christians to reexamine the issue of who is to blame for the crucifixion.

Moreover, modern rabbis argue that it is the Romans, not the Jews, who were the physically responsible party for the death of Jesus. According to them, crucifixion was a uniquely Roman form of execution which the Jews did not have the authority at any level to carry out for they were subject to Roman occupation from the time of Herod the Great, approximately 30 BCE.

Notwithstanding, those rabbis ignore the fact that the Jewish mob sided with the Pharisees, shouting “Crucify him, crucify him.” Mk. 15:13. The New Testament Gospels present in clearest terms successful efforts by the Pharisees to persuade the Romans to crucify Christ. In the Book of Acts, the disciples, in face to face rebuke of the Pharisees, insistently identify them as the culprits: “The God of our fathers raised up Jesus, whom you had put to death by handing him on the cross.” To hasten the crucifixion of Christ, the Jewish leaders said, “His blood be upon us and upon our children.” Mk. 27:25.

Christ warned “Beware of the leaven (teaching) of the Pharisees.” Matt. 16:6. Paul also warned the church, referring to the unbelieving Jews as “enemies” (Rom. 11.28) “… who both killed the Lord Jesus and prophets, and drove us out. They are not pleasing to God, but hostile to all men.” I Thess. 2:15

As for the followers of Christianity, they also believe that Jesus was actually killed and crucified to save humanity. We read the following verses in the New Testament:

And about the ninth hour Jesus cried with a loud voice, saying, “Eli, Eli, lama sabachthani!” That is to say, My God, my God, why hast thou forsaken me?
Some of them that stood there, when they heard that, said, “This man calleth for Elias.”
And straightway one of them ran, and took a spunge, and filled it with vinegar, and put it on a reed, and gave him to drink.
The rest said, “Let be, let us see whether Elias will come to save him.”
Jesus, when he had cried again with a loud voice, yielded up the ghost. (Matthew 27:46-50)

As for Muslims, they believe that Jesus was neither killed nor crucified but another person was made to resemble him before them. Allah says in the Qur’an:

And [for] their saying, ‘Indeed, we have killed the Messiah, Jesus, the son of Mary, the messenger of Allah.’ And they did not kill him, nor did they crucify him; but [another] was made to resemble him to them. And indeed, those who differ over it are in doubt about it. They have no knowledge of it except the following of assumption. And they did not kill him, for certain. (An-Nisaa’ 4:157)

According to the exegetes of the Qur’an, notably Al-Razy, somebody else was killed instead of Jesus. According to his exegesis, the killed person might have been one of the following persons:

The Qur’an confirms that the killers of the false Jesus themselves suspected killing Jesus for the resemblance was cast upon the face rather than the body. When they killed the suspected Jesus, they looked at his body and said: “The face is Jesus’, but the body is that of somebody else.” Al-Suddy stated: “When the Jews confined Jesus along with ten of his disciples in some house, a Jew came in to bring him out and kill him. Thereupon, Allah cast the resemblance of Jesus upon that man, whereas Jesus was raised to Heaven. So they took the wrong man and killed him thinking that he was Jesus. However, they then wondered: “If this is Jesus, where is our man? If he is our man, where is Jesus?”