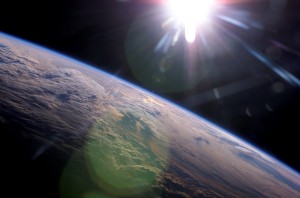 It is nothing short of a miracle that the planet earth as created by Allah so long ago continues to provide adequately for man’s sustenance.

And recall when your Lord said to the angels: I will place a vicegerent on earth. They said: Will You place therein one who will make mischief and shed blood therein while we celebrate Your praises and glorify You? Allah said: I know what you do not know.

And He taught Adam the names, all of them, then He set them before the angels, and said: Tell me the names of these, if you are right. They said: Glory to You! We have no knowledge except what You have taught us. Surely it is You alone Who are All-Knowing, All-Wise.

Allah said: O Adam! Tell them the names of those things. Then when he had told them the names of those things, Allah said: Did I not tell you that I know the secrets of the heaven and earth, and I know what you declare and what you conceal? And recall when We said to the angels: Prostrate before Adam. They prostrated: not so Iblis. He refused and was haughty, and he became one of the unbelievers. (Al-Baqarah 2:30-34)

The question as to how this universe and its inhabitants, especially man, came into being has always excited the human mind and imagination. For a faith community, this issue is of the utmost importance. For the answer to this question and the beliefs about creation dictate the relationship of the universe with the divine and man’s status and responsibilities. The stance on creation determines what life is, how man is expected to live it and what the ultimate end of everyone, including man, is.

In other words, such fundamental concepts as divinity, the purpose of life, man’s role, the Afterlife and divine guidance hinge on a community’s view of creation. It, thus, literally as well as metaphorically, constitutes the starting point for the comprehension and appreciation of the universe, its nature and purpose, its Creator and its final end. The self-evident truth that the One True God is to be credited with the creation of the universe has, however, been clouded, rather eclipsed by fallacious notions held by various communities both in the past and in our own times, about the origin of life.

The Greek version concerns itself only with the birth of a plethora of gods and goddesses, making no mention of man’s creation.

In ancient Egypt, “Nun” (the primeval water) was credited with the phenomenon of creation. The first Book of the Old Testament, Genesis (Chapters 1-11) offers a detailed yet insipid version. The Biblical account runs as follows:

On studying the above, the reader gathers the odd impression that man was created only for the purpose of “tilling the ground”. Moreover, man does not seem to occupy any special place in the Biblical scheme of creation, for his birth is bracketed within the appearance of such ordinary objects of nature as plants and herbs. Nor was the earth provided with rain-water and plant life when man made his first appearance on the scene.

In other words, scant attention was paid to meeting man’s basic needs. The Biblical description of man’s creation is devoid, in equal measure, of any outstanding feature:

“Then the Lord God formed man of dust from the ground, and breathed into his nostrils the breath of life; and man became a living being.” (Genesis 2:7)

By contrast, a couple of adjectives – “pleasant to the sight”, and “good for food” – are employed for describing the tree of life.

In our times, under the pernicious influence of Darwinism, which maintains that the universe and all living beings have evolved over millions of years without any role for God, people have grown skeptical about the Scriptural version of creation. The Biblical account, in particular, is derided and pejoratively branded as creationism.

All such misconceptions are dispelled in the above Qur’anic passage which offers a coherent, reasoned and appealing account of creation.

Moreover, it brings into relief the following truths:

– Allah being All-Powerful is the only Creator. He brought everything into being out of His wisdom and no one has any share or role in it.

– Creation is not something haphazard or the result of the working of certain laws of nature. It stands out as a massive testament to Allah’s creative power, and His grand plan, of which man is a key figure.

– Angels, a distinct species markedly different from human beings and jinn, are wholly obedient to Allah.

– Before Allah bestowed His khilafah (vicegerency) on Adam, the progenitor of mankind, He blessed him with knowledge. This demonstrated Adam’s excellence before everyone.

– Knowledge is special to man. Angels and other species cannot compete with man on this count. By utilizing knowledge in the way prescribed by his Master and Lord, man can attain the highest degree of success.

– Satan deliberately disobeyed Allah out of pride. He stands eternally cursed for his deadly sins.

Being the Lord and Cherisher of mankind, Allah has devised creation in such a perfect manner that it caters for all man’s needs, especially physical and material. It has accordingly ensured man’s survival on earth.

It is nothing short of a miracle that the planet earth as created by Allah so long ago continues to provide adequately for man’s sustenance. Needless to add, the human population has increased in astronomical proportions yet the same planet earth suffices for mankind. Its natural resources are so abundant that they appear to be inexhaustible.

Apart from the provision of sustenance, and in line with His scheme of things, Allah has also arranged for the religious, moral and spiritual sustenance of man. Such guidance is imparted through His Messengers and Scriptures.

Only Allah Who is the real Cherisher of mankind could draw up such a comprehensive plan for man’s existence and guidance.

The article is an excerpt from Abdur Raheem Kidwai’s The Qur’an: Essential Teachings, published by the Islamic Foundation, 2005/1426 H.