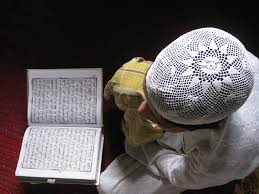 Allah wanted to show man’s position and standing; so He commanded His Angels to prostrate for him.

It was a decision of Allah to create a creature that could inhabit this universe and His choice was man. lt is also in accordance with His Divine Wisdom that the matter from which man was created was the earth. He originated his creation from clay and then molded him on this beautiful shape that he has now. When he has become completely perfect in that shape, He breathed life Into him through His Spirit (Angel Jibril  -Gabriel) and He made him become man in the best form; provided him with the ability to hear, see, move and speak. Then his Lord made him live in Paradise, taught him all that he needed to know, made lawful for him all that was in Paradise and forbade him from a single tree  -as a test for him.

Allah wanted to show man’s position and standing; so He commanded His Angels to prostrate for him. All of the Angels prostrated but Satan arrogantly and obstinately refused to prostrate. So Allah became angry with him for his disobedience and expelled him from His Mercy because of his arrogance. Satan asked Allah to extend his life and give him respite till the Day of Resurrection. So, Allah extended his life till the Day of Resurrection

Allah warned Adam of the evil plan of Satan, but Satan tempted Adam and his wife Hawwa’ (Eve) in order to get them out of  Paradise  and to uncover for them that was hidden from them of their private parts. He swore by Allah to them that he was a sincere well-wisher for them and that Allah had not forbidden them from that tree save they should become angels or become of the immortals.

Having been influenced by the deception of Satan, Adam and Hawwa’ ate of the forbidden tree and the first punishment that afflicted them for their disobedience of Allah’s  command was that, which that was hidden from them of their private parts became exposed and Allah reminded them of His warning about the tricks of Satan.

Adam then sought for the forgiveness of his Lord. So Allah forgave Him, accepted his repentance, chose him and guided him.

He then ordered him to descend from the Paradise where he was living, to the earth wherein there was his abode and his enjoyment for a time. He also told him that it was from earth that he was created,  on it he would live and die and from it he would be resurrected.

Adam and his wife Hawwa’ then descended to the earth and their children procreated and they all used to worship Allah, because their father Adam was a Prophet. Allah tells us this story in the glorious Qur’an in many places.

The Creation of Man

Consider the greatness of Allah’s work in man. He created him in the best form, clothed him with traits of honor like intellect, knowledge, eloquence, art of speaking, beautiful  figure, moderate body, ability to acquire knowledge through analogical deduction and thinking. Far is his condition while he was just a drop of sperm kept in the womb of his mother from his creation while the Angel will enter upon him in the Paradise.

This world is a village and man is its inhabitant. All is preoccupied because of him and all is made to work for his interests. All other creatures are made to serve him and provide for his needs. The angels are charged to protect him during day and night. Those of them who are charged with provision of rain and plants strive to provide him with his sustenance; orbits are made to surrender to him and revolve in his services; the sun, moon and stars are all subjected to move in line with his time reckoning and for the betterment of his food arrangement. The aerial world with its winds, clouds, birds and all that it contains is also subjected to him. So, is the lower world with all its seas and rivers, its trees and fruits, its plants and animals and all that is in it. Allah says,

To complete His honor on man, He created for him all that he needs in his worldly life and all that he needs that can make him attain the highest positions in the Hereafter. He as such, revealed to him His Books and sent to him His Messengers explaining to him the Law of Allah and calling him unto it.

Then Allah created for him from his own self, meaning from Adam himself, a wife, so that he might enjoy the pleasure of living with her, in response to his natural needs, be it psychological, intellectual and physical. Adam  then found with her comfort, tranquility and stability and both of them found in their togetherness peace, contentedness, love and mercy. This is because of their physical, psychological and nervous composition, both of them are made to respond to the desires of each other and both are made to be in harmony in the process of producing new generations. The souls of both are enriched with these feelings and their relationship is filled with comfort for the soul and nerves, peace for the body and mind, stability for the life and subsistence.

Allah then chose the believers among mankind and made them his friends. He made them obey Him and work for Him according to His Laws in order to make them qualify to live in His Paradise. He chose among them Prophets, Messengers, devout people  and martyrs and blessed them in this world with the best favor that human souls can enjoy: worshipping Allah, obeying Him and supplicating to him. He also distinguished them with great favors -that others cannot get-  among which are: peace, tranquility and happiness, and greater than all this is the fact that they know the truth that was brought by the Messengers and believe in it. Allah then keeps for them in the Hereafter the everlasting bliss and great success that befit His generosity, glory be to Him. He will also reward them for their belief in Him and their sincerity to Him and will give them more  of His Bounty.

Source: Taken from the author’s Islam: Its Foundations and Concepts.